Drinking in the Details

Cocktails (and more!) at El Monumento in Georgetown 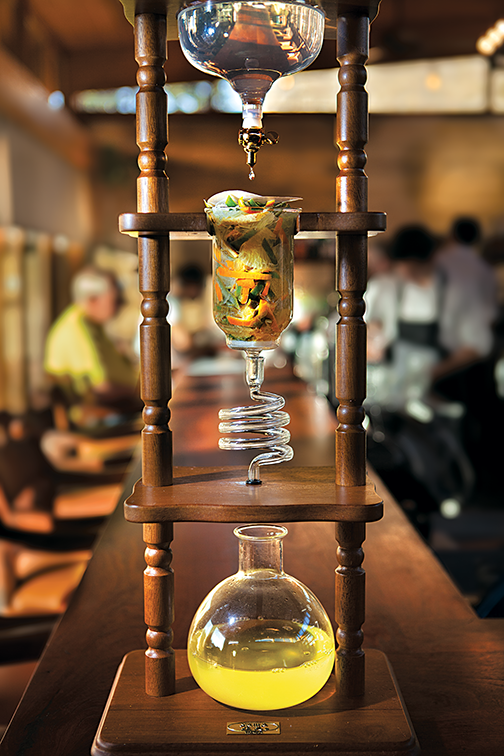 I’m bellied up to the oval mesquite bar at El Monumento restaurant in Georgetown, waiting for my perfect negroni—an astringently bittersweet concoction whose murky history places its first appearance in Italy around 1919—as bartender and resident hooch historian Jeremy Corn conducts an abridged version of his monthly “Mixology 101” class. Golden, late-afternoon sunlight streams through floor-to-ceiling windows overlooking a patio scattered with tile-topped tables and broad orange umbrellas, and the adobe-like, rammed-earth walls enhance the warm ambiance. “I call this the tale of two negronis,” Jeremy says, pouring equal parts gin, sweet vermouth, and Campari in a vintage rocks glass, then adding a half-moon of orange peel and some ice.

I take a sip and wince. This first negroni tastes harsh and unpalatable. I watch him prepare another with exactly the same ingredients and proportions—this time in a large, crystal mixing pitcher packed with ice. Then he carefully stirs the mixture with a long silver spoon for a few moments before straining it into my ice-packed glass. This version tastes velvety, sumptuous, complex, and deliciously mellow. Jeremy smiles; he’s used to students’ surprised reactions. “We apply ice to chill and dilute the drink, and it does matter how it’s stirred,” he says. “After all, making cocktails is an offshoot of the culinary arts, and attention to detail is paramount. When you pour a mixed drink, it should look silky-smooth like ribbons, like a stream of diamonds.”

Jeremy’s monthly mixology classes ($65, including a hearty lunch) number among many hands-on culinary offerings at El Monumento (which specializes in cuisine from interior Mexico and South America) and its big-sister restaurant up the street, The Monument Cafe, where standbys include fried catfish and truckstop enchiladas. Herb and vegetable gardens surround both properties, and chefs make good use of the produce for their menus—and for regular classes in the basics of cooking, gardening, nutrition, beer- and wine-appreciation, and the art of craft cocktails. “We want to show people that great food and drinks can be made at home,” says co-owner Rusty Winkstern, who opened The Monument in 1995 and El Monumento in 2012. “People don’t cook much anymore, and we’ve lost generations of food knowledge. But when a meal comes from the heart, it means more.”

If that sounds ironic coming from the mouth of a man who wants you to eat and drink at his restaurants, consider that most home cooks don’t possess the equipment or skills to replicate restaurant meals—or cocktails—at home. “What’s the difference between a good drink and a great drink?” Jeremy asks rhetorically. “Tiny little details.” De-tails like proper temperature, proportion, stirring technique, and presentation; or knowing whether to stir or shake a drink. (The rule, according to Jeremy: Shake drinks with fruit juice; otherwise, stir. James Bond, it seems, had his martinis all wrong.) Then there are logistics such as having access to such things as heart-shaped hoja santa leaves for making Oaxacan tamales (a seasonal special), a mesquite-fueled fire for grilling beef tenderloin ($19) or fat Gulf shrimp ($17), or a library of specialty liqueurs for some of the 25 cocktails Jeremy considers “classics.”

Another item you’re not likely to have at home: A green, enameled manual ice shaver from Japan, which Jeremy imported so that El Bar—as the bar at El Monumento is known—could serve frozen drinks like margaritas without making a racket with a blender. Perhaps the most exotic drink at El Bar is something called the “8-Hour Margarita” ($16; most other cocktails here run $8), which involves infusing tequila and orange liqueur with lime and orange segments, lemongrass, and sugar over an eight-hour period. Jeremy and Rusty are pretty certain you won’t try that at home.

In addition to classes, El Bar hosts a Wednesday-evening gathering known as “Mixology Wednesday,” when the bartenders prepare three classic mini-cocktails for $14, offering guests the opportunity to compare flavors and techniques. Like the open kitchen does at the restaurant, the oval bar provides a close-up view of the process. “People like to watch the action,” says Jeremy, who notes that these days, customers tend to want one impeccably made drink rather than several libations made with less care. “If they’re going to have just one, we owe it to them to make it right,” he says.

That attention to detail carries over to the El Monumento restaurant, as well. A blond-wood ceiling, exposed brick, candlelit chandeliers, and vibrant artwork on the walls make the large space seem cozy. Even traditional dishes at El Monumento offer surprises: The guacamole delivers a hint of sweetness thanks to mangoes and red grapes, for example, and the spicy shrimp relleno is mellowed by mushrooms and shredded carrot. “When I was growing up in western New York, my dad was a John Deere dealer, so we were always around farms,” says Rusty. “I’ve always liked food and taking care of people. Georgetown is a great community, and I’m proud that we enhance that.”

I’ll drink to that. As they toast in Spanish, “Salud, dinero, y amor! Y tiempo para disfrutarlo!” (Health, money, and love! And time to enjoy it all!)