Eat to the Beat 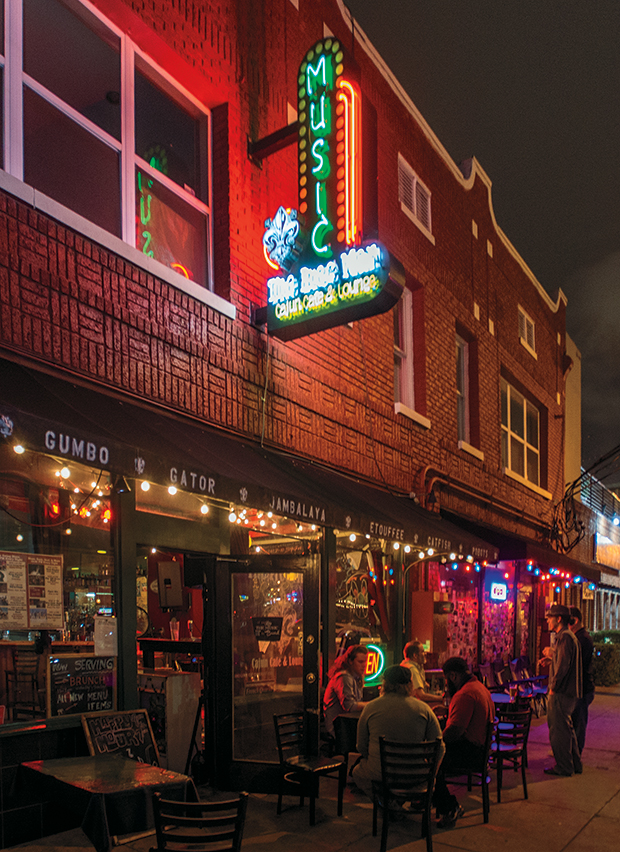 Music has drawn people to the Deep Ellum neighborhood of Dallas since the 1920s, when Leadbelly, Blind Lemon Jefferson, and other country-blues guitar greats played for tips on street corners, and ebony divas Bessie Smith, Ida Cox, and Lillian Glinn sang in the clubs and theaters.

For more information about Deep Ellum, see www.deepellumtexas.com and www.visitdallas.com.

Also called “Central Track” for the depot of the Houston and Texas Central Railroad that all the saloons grew up around, Deep Ellum was the Beale Street of Texas, where the nightlife jumped and juked to jazz and blues.

But the current stars of Deep Ellum, which takes its unusual spelling from how the blues musicians pronounced the main street Elm, are the chefs and owners of such eateries as Pecan Lodge, Luscher’s Red Hots, Tanoshii Ramen, Independent Bar & Kitchen, Café Salsera, Cane Rosso, Filament, and more.

Back in the early ’90s, when I frequented the neighborhood as a music critic for The Dallas Morning News, the main cheeseburger competition was between Adair’s Saloon (which was birthing the “red dirt” country scene with Jack Ingram) and Angry Dog. But these days, beef-and-bunheads can also choose burgers at spots like Braindead Brewing, Twisted Root, Easy Slider, and On the Lamb. Or they can decide to take a culinary trip to Chicago at Luscher’s, which serves a tasty beef sandwich dipped in au jus.

Deep Ellum, which also has two fine late-night breakfast spots with Cafe Brazil and Buzzbrews, is now a dining district that also has live music and dance clubs on the side. Live-music mainstays Trees and Club Dada still rock on Elm, the Double Wide on Commerce provides a scene for hipsters in trucker hats, and a club called the Bomb Factory (at the site of a former munitions plant), blesses the neighborhood with a venue that can hold 3,000.

“The food scene here is exploding,” says Mike Snider, whose comfort-food haven, AllGood Cafe, also features live music. “You’ve got all these new restaurants with their own ideas and concepts springing up all over.”

Snider modeled his 17-year-old restaurant AllGood, in part, after the lamented Deep Ellum Café, which put the neighborhood on the culinary map in the mid-’80s with sensational chicken-fried steaks and a breakfast menu responsible for hour-long waits on the weekends. “It was right next door to Club Dada,” Snider says. “Deep Ellum Café introduced the idea that good food and live original music could thrive side by side.”

The exalted Pecan Lodge, which graduated from Shed #2 at the Farmers Market to a new 5,000-square-foot building at Main and Pryor streets in 2014, is one of the trailblazers in this current food renaissance. The lines are so long for the tender and tasty brisket, ribs, and homemade sausage that nearby restaurants benefit from the runoff. “All smoke, no mirrors” is the way the Lodge describes its simple, delicious style.

The area has seen its ups and downs: After Central Expressway was built in 1949, it created a barrier between Deep Ellum and downtown Dallas, which led to a state of decline for more than three decades. But as it did in the 1920s, in the 1980s music brought folks to the neighborhood for the first Deep Ellum revival. A flurry of alternative bands, led by Edie Brickell & New Bohemians, Shallow Reign, and Three On a Hill, created a music and art scene in that area between Fair Park and Central Expressway. And the new bands and fans had to eat.

“It’s not like there weren’t restaurants down here before,” says Snider, who mentions Baker’s Ribs and St. Pete’s Dancing Marlin as longtime Deep Ellum eateries that are still open.

“Rudolf’s Market [which services many restaurants in the area] has been open since 1895,” emphasizes Snider. That was soon after Deep Ellum got a cotton gin factory and right before Henry Ford opened a Model T assembly plant on Canton Street, both of which brought job-seekers to the area. The trains brought in pickers of both cotton and guitars, which made for a party around the clock. Certainly there were places to eat in the ’20s, ’30s, and ’40s, but few people remember them.

Bohemians, new and old, saved Deep Ellum in the 1980s.

But by the early 2000s, the historic neighborhood was once again in a slump. Deep Ellum suffered a reputation as a high-crime area, and the area’s live-music clubs, active for only a few hours each night, couldn’t afford to stay open due to rising rents.

These days, the current food boom gives this historic musical hotbed a new identity. Melody still feeds the soul, but the body has more options for sustenance than ever before.

“Some [new restaurants] are gonna last and some are gonna sink,” says Snider, who’s seen three cycles of boom and bust. He worries that soaring real estate values might price out longtime Deep Ellumites, but for now, his café is too busy to dwell on such things.

Let’s take it back to the musician Leadbelly, who used to guide Blind Lemon Jefferson, the first national star of country blues, around Deep Ellum in the teens and ’20s. To paraphrase Leadbelly’s famous song “Where Did you Sleep Last Night,” the current theme song of Deep Ellum could be “Where Did You Eat Last Night?”