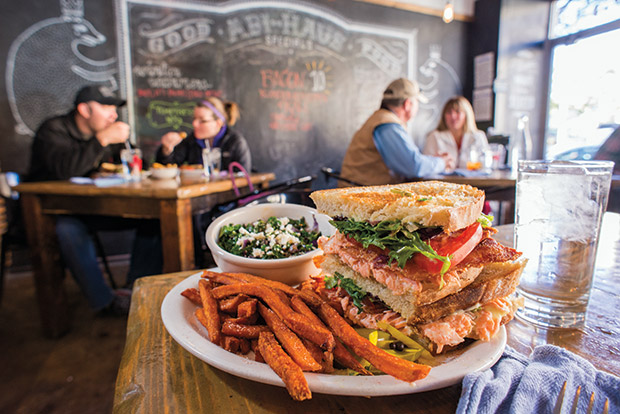 The blackboards covering the walls of Abi-Haus, Abilene’s buzziest eating-drinking hotspot, serve as more than artful design elements, though they accomplish that function well.

A Flight of Abilene Hot spots

Some, as you might expect, inform patrons about daily Abi-Haus specials. But mostly, the curlicue-festooned words, hand-drawn in a Western-Victorian style, comfort and inspire.

Sitting down at one of the dining tables, I’m so taken with the messages that it’s difficult to concentrate on the menu. Each of these blackboards, either suspended high above tables or tucked into nooks and crannies of the busy bistro, speaks of family, friendship, love, and fearlessness. The largest of these signs hangs beside a community table, reading, “Abilene … I can fly,” surrounded by a fanciful heart.

I’m intrigued. Who’s bursting with all this positive energy? Turns out that’s proprietors Jimbo Jackson and Ryan Feerer, who I meet along with Jimbo’s wife Jessica during my meal,
as they enjoy spending time with patrons almost any time the Abi-Haus
doors are open.

The “I can fly” motto not only honors Abilene’s close ties to nearby Dyess Air Force base, where Jimbo retired from service some years ago, but it also reflects the passion he and his team share for the city. Abilene is so special to these folks that they’ve also launched sister businesses to complement the restaurant. Later, as we explore the Jacksons’ boutique called Betty & June and Jimbo and Ryan’s cocktail lounge called Public Haus, which share the same broad 1885 building as the restaurant, we find each space infused with the owners’ youthful, upbeat spirit.

“It’s about celebrating the great things in Abilene. Another of the blackboard signs says, ‘Long Live Abilene,’ which we love,” says Jimbo. “We are all so proud to be a part of the exciting renaissance that is happening in downtown Abilene.”

Sitting at one of Abi-Haus’ antique wooden dinner tables, decorated with fresh flowers and set with pleasingly rumpled linen napkins and simple flatware, my husband and I study the menu and sip gin-basil gimlets from 1930s champagne coupes. We note the crowd around us in the dining room, all in animated conversation back and forth between tables.

As we overhear happy chatter about a new art exhibit at the nearby Grace Museum, we make a concerted effort to decide on dinner. We’re here, after all, to enjoy some of the terrific food and drink that has put Abi-Haus on the culinary map. And, as we soon realize, Chef Natalie Mesa deserves the praise heaped on her in the past year or so.

Raising comfort food to new heights, Natalie’s flaky turnovers, for instance, serve as an example of how she puts a deluxe spin on even simple things. We break open the golden-brown pastries to reveal a filling of cubed steak braised in stout beer with Manchego cheese. The chicken-and-mash plate borders on perfection: A plump half-chicken roasted until bronze is served atop a fluffy, buttery pillow of skins-on mashed potatoes. Equally sublime, a burly pork shank is braised in red wine and served over cheesy grits with sautéed spinach.

I’m especially taken with thoughtful touches, like the server who arrives tableside with tongs and an ice bucket to freshen our water glasses. The same server knows just which Texas craft beers pair best with our entrees, too, such as Lakewood Temptress Imperial Milk Stout from Dallas and Real Ale’s Belgian White from Blanco.

After dinner, we wander around the corner to Public Haus, the watering hole Jimbo and Ryan opened last winter. There’s not much in the way of signage, giving Public Haus a bit of a speakeasy appeal. That sense magnifies when the plain front door opens to reveal a lively and very dimly lit joint brimming
with folks on barstools, at couches, or seated at tables, enjoying cold beer and classic cocktails.

Returning to Abi-Haus for brunch the next day, we’re impressed again by the tableau of convivial community. Taking seats at sidewalk tables, we’re drawn into conversation with the proprietors and their many friends, including those who run the nearby Pappy Slokum brewery, the local pig farmer who supplies Abi-Haus with pork, the owner of a neighboring art gallery, and the curator of the Grace Museum.

Amid conversation, we nibble on toasted slices of house-baked bread spread with smashed avocado and sliced tomatoes. Though I’m delighted with my plate of duck hash, served over toasted challah bread and drizzled with hollandaise sauce, I steal bites of my husband’s plate of shrimp and jalapeño-bacon-cheese grits.

After brunch, we spend a little time next door at Betty & June, the chic
corner boutique Jimbo and Jessica named for their grandmothers. The one-time insurance company space is now a shop where patrons can nab adult beverages from a vintage fridge to sip while browsing racks of jeans, jackets, frocks, and tops from Los Angeles and New York designers.

On our way back to our inn for a nap, we pass Pappy Slokum Brewing Co. We recognize some of our new friends outside, gathered around picnic tables,
sipping the local brews. We see Chef Natalie, serving nachos and pizza from the mobile kitchen inside the Trailer Haus, Abi-Haus’ food truck.

This scene recalls my favorite chalkboard sign at Abi-Haus. That’s the one that reads, “The fondest memories are made when gathered around the table.” It spells out this special Abilene vibe, which happens to taste good, too.