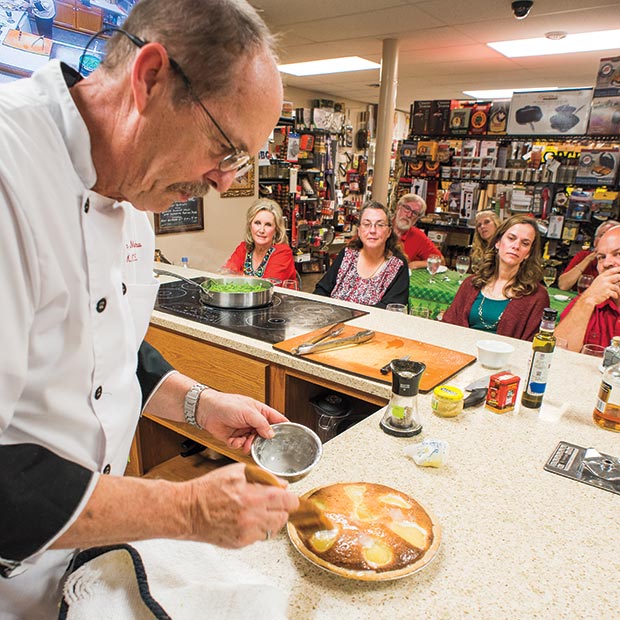 Chef Mike Morphew, a Texas transplant from London who has cooked for the royal family, teaches classes at Le Petite Gourmet twice a month.

While I’m an avid cook and food writer, I’m not usually a fan of “gourmet” kitchen stores. In my experience, instead of tools for serious cooks, the merchandise tends to be heavy on cutesy gifts and novelties like pig-shaped sponges. So, as I approached the door to Le Petite Gourmet Shoppe, across from the historic courthouse in downtown La Grange, I braced myself for the aromas of candles and cinnamon-scented home spray. Boy, was I wrong.

“I could see that La Grange was ready for a gourmet food store,” owner Donella Dopslauf-Cernosek tells me as we wander past stacks of the latest cookbooks, Belgian waffle irons, gleaming French crocks, puff-pan-cake makers, and colored sugars. Meanwhile, I try to stay focused despite the alluring aromas wafting from the kitchen.

Since Le Petite opened in July 2006, Donella has made it her mission to empower home cooks with the best tools, service, and kitchen fun around. But the Shoppe’s origins be-gan much earlier.

After earning a bachelor’s degree from Sam Houston State University in 1970, Donella worked as an extension 4-H youth agent, eventually earning a master’s degree at Texas A&M University and working as a County Extension agent in Gonzales and Colorado counties. Back in those days, part of the job meant going door to door to teach homemakers essential skills, including how to safely can and preserve foods.

Morphew’s easy teaching style and accessible, imaginative recipes—not to mention his stories about cooking at the palace—make for a wonderful evening.

These days, her no-nonsense approach to empowering cooks with practical information and efficient tools serves her customers well. To stay on top of trends, Donella regularly attends the International Housewares Show in Chicago so her store can offer the latest inventions in the culinary world. Eventually, when those items finally arrive in big-box stores, she phases them out to make room for fresh inventory.

As an example, she tells me about an older German woman who came in looking for a vegetable peeler. “She was frustrated by her old one and wanted something that worked,” Donella says. Donella showed her a few options, including her favorite—a model that sells for $46. The woman purchased the peeler, and then returned a few weeks later. “I thought, uh-oh,” Donella confesses, “but she bought three more, one for each of her children.”

However, not everyone can afford a splurge tool, so to serve a wide audience, Donella offers items in various price ranges. “I have always maintained that educating the consumer, regardless of who they are or what their means might be, dictates their choice.” she says. “Price normally does not matter in their decision.”

As a hub between major cities, La Grange has proven to be a fortuitous place for networking. One day, chef Mike Morphew, a London native who had followed his wife to Texas, stopped by to introduce himself. When Donella discovered that he’d cooked for the royal family at Buckingham Palace, and had opened culinary schools around the world, she invited him to teach cooking classes in La Grange. He accepted, and now his twice-monthly, two-hour courses ($50, including a three-course meal and wine), attract devoted locals and visitors alike.

Morphew’s recent “Taste of Scotland” class featured these menu items: cock-a-leekie soup with barley, oatmeal-crusted fillet of salmon with spinach cream sauce, broccoli with whiskey cheese sauce, and a boozy tipsy trifle. As an added perk, students receive a 10 percent discount on store purchases, and chef Mike sharpens dull knives upon request. Morphew’s easy teaching style and accessible, imaginative recipes—not to mention his stories about cooking at the palace—make for a wonderful evening. And in the short time that we spent together, I learned plenty. He demonstrated why he likes his favorite mixer (a model I wasn’t familiar with) better than the leading brand. To show me the power of his preferred blender, he augmented his silky potato leek soup with a handful of herbs and other ingredients, including what he described as “good European butter.” Some things, I was learning, cannot be easily substituted. 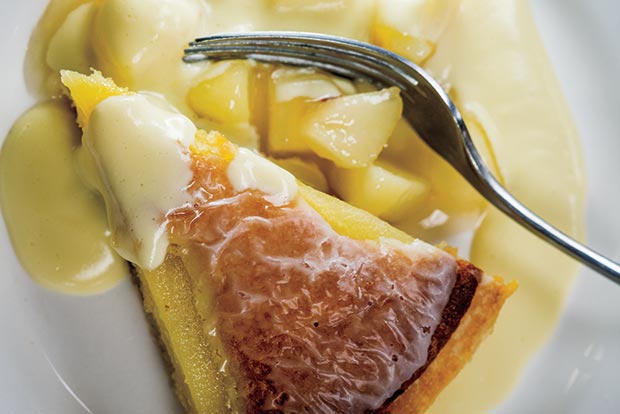 Take peppercorns, for example. A few years ago, Donella met Bertil Akesson of the South African company Akesson’s Peppers, which has a high-end pepper and chocolate boutique in London. Akesson has family in Central Texas, and whenever he and his wife visit, he personally delivers a fresh supply of spices and chocolate to the store.

Morphew toasted a few varieties of those Akesson peppercorns for me, and their intoxicating fragrance and earthy, citrusy flavors made me reconsider the possibilities of “freshly ground pepper” in a recipe. Before I left, I sipped a cup of chocolate tea made from cocoa husks.

And classes aren’t just for adults: Coy Heinrich, a lanky and unflappable young adult who learned to bake from his mother and grandmother, teaches popular Kids ‘N the Kitchen classes throughout the summer and during the holidays. Le Petite also hosts private birthday parties and offers a bridal registry. To compete with online retailers, Donella tells me, her shop puts extra effort in packaging so “brides receive beautifully wrapped boxes, not brown packages in the mail.”

I returned home newly inspired. I toasted peppercorns, ground them with a mortar and pestle, and sprinkled them over poached eggs. Voila: An everyday dish became elevated and exciting. I made leek and potato soup because Mike’s was so delicious, and I wanted more of that soothing puree. I’d also spied a few new kitchen toys that I’ve added to my Christmas list, like the chicken-shaped roasting pan and a blender attachment for making nut butter. Suffice to say I’ll be back, soon.