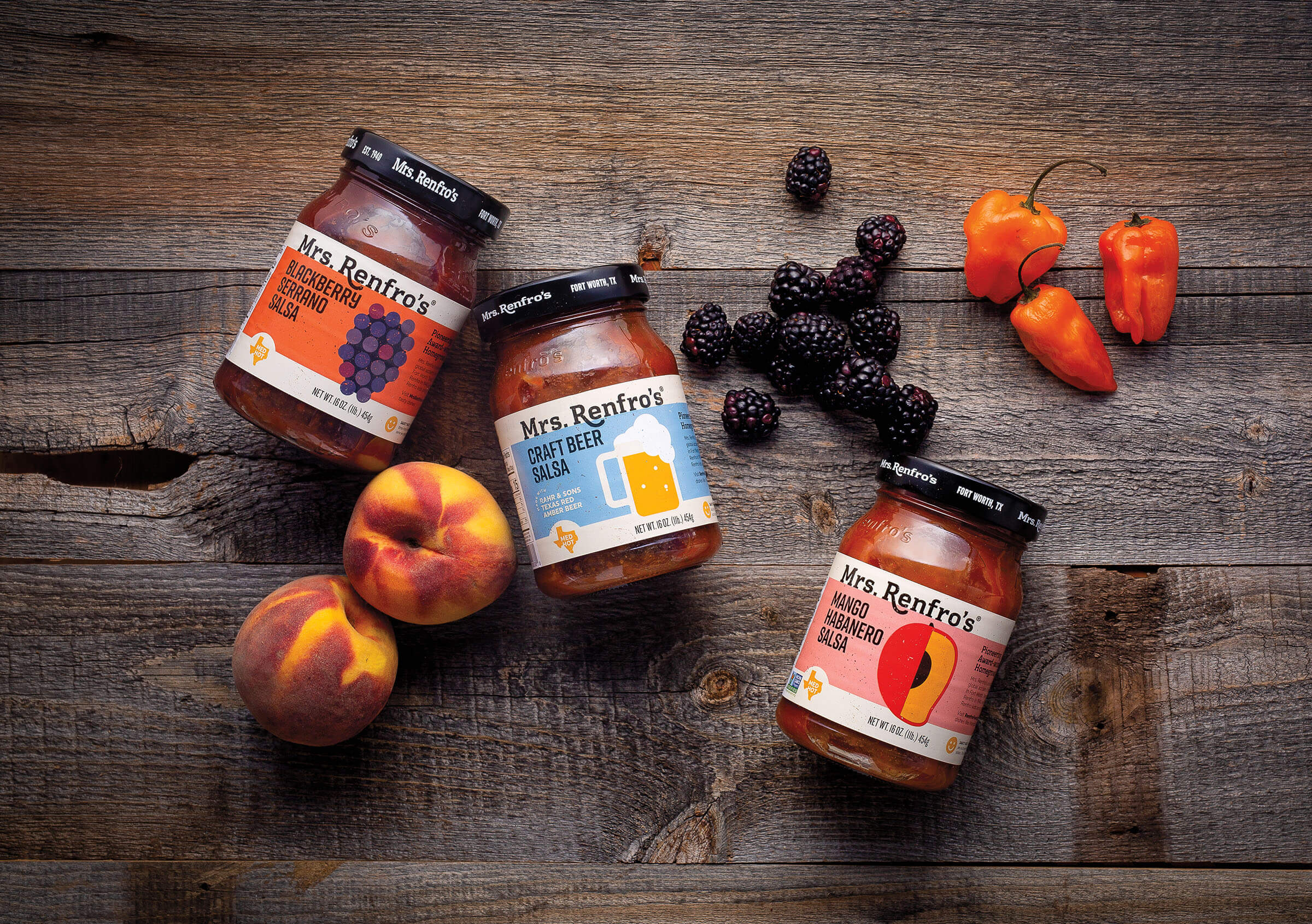 As a young boy growing up in Fort Worth, Doug Renfro never dreamed he’d eventually run his grandparents’ condiment business. Back then, the company best suited him as a place for games of hide-and-seek among hundreds of cardboard boxes in the warehouse with his cousins, James Renfro and Becky Renfro Borbolla.

“My dad and uncle set up a Halloween haunted house in the warehouse for the neighborhood when we were kids; we thought that was fabulous,” Doug recalls. “Then I worked there over a lot of summers, sweeping or carrying sacks of cabbage or mixing spices for five to six hours at a time. None of that was exciting to me.”

Visit renfrofoods.com to place orders and get recipes. Find Mrs. Renfro’s products at most grocery stores, including H-E-B, Walmart, Aldi, and Tom Thumb. You can purchase directly through the company’s Facebook page, too, at facebook.com/mrsrenfros.

Now adults, Doug, James, and Becky lead the nation’s seventh most popular salsa brand, according to retail research data. That’s a significant leap since their “Paw-Paw and Mam-Maw,” George and Arthurine Renfro, opened a business out of their garage on Fort Worth’s Northside 80 years ago. In 1940, George decided to start his own business after selling food products for a local company during the Great Depression. “For the first decade, he and my grandmother worked from their house distributing vinegar, spices, and other goods to grocery stores,” Doug says. “After a few years, they started making chow chow, which was our No. 1 product into the 1970s.” Two chow chow (pickled relish) varieties endure today, selling some 70,000 jars annually. For years, jars were hand-filled by workers; now, machines fill 165 jars per minute, all day long.

Though you can still find a few of the original products (such as corn relish and chow chow), Mrs. Renfro’s now specializes in salsas, barbecue sauces, and queso dips. In the 1970s, brothers Bill and Jack Renfro jumped into a growing market then called “taco sauce,” making mild, hot, and green varieties. With the spread of Tex-Mex’s popularity, salsa sales took off.

“We Texans often forget, but there really is a huge Texas mystique in the rest of the country and the rest of the world,” Doug notes. “The Tex-Mex craze is worldwide. It shows no sign of slowing down.”

Some 30 different products are available across the United States, and 20 products fill shelves in Canada. The British buy 40,000 jars per year, and Australians snap up 20,000 jars annually. Sales are climbing in other European countries, the Philippines, South Korea, and more recently, the Middle East. Becky, who manages international sales for the company, spreads Mrs. Renfro’s salsa gospel in far-flung places. “I’m passionate about travel—I don’t mind being on a 17-hour flight to Hong Kong—and I love meeting people from all over the world,” she says.

The company, while sticking to the classics, has also branched off to include unconventional salsa flavors like craft beer, ghost pepper, and blackberry serrano. These additions make its products stand out at industry trade shows and major grocery chains.

“We grew from an economical brand in the farmers markets to a gourmet brand in grocery stores, and we got to be known as flavor innovators,” Doug says.

The third generation of Renfros is proud to be carrying its family’s work forward. “I think that my grandparents would be shocked at a photo I took at a Whole Foods Market in London, with two full shelves of Mrs. Renfro’s salsas,” Doug says. From Big Tex to Big Ben and beyond, Mrs. Renfro’s continues to dip into new territories.