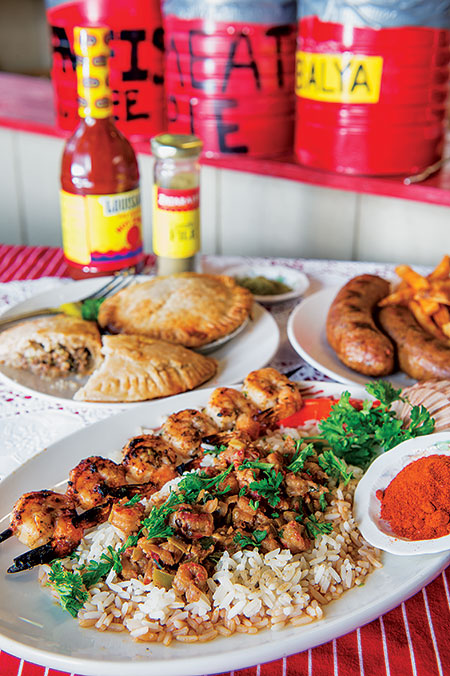 The “Down the Bayou Cooking” banner strung above Zachary Taylor’s booth in an oak motte in the hills above Medina Lake draws me like a crawfish to a piece of dangling chicken neck.

Though the Bandera County community of Lakehills lies hundreds of miles from Louisiana, I take one spoonful of Gumbo Cook-Off contestant Zachary Taylor’s toffee-colored, perfectly spiced seafood-and-sausage ambrosia and might as well be slurping the Pelican State staple in some Atchafalaya Basin café in the heart of Cajun Country. Hoo boy!

Started in 1981 as a fundraiser, the cook-off is now just one facet of today’s annual Medina Lake Cajun Festival, which celebrates its 34th year September 27. The cook-off now shares the spotlight with booths offering authentic Cajun fare, an arts and crafts bazaar, children’s carnival attractions, and live Cajun and zydeco music that keeps festival-goers dancing from 11 a.m. to 10 p.m.

New Orleans transplant “Cajun Bob” Caswell, an attorney with family roots in the bayou country of New Iberia and Jeanerette, still chuckles when he recalls the community leaders’ reaction to his suggestion they raise money with a gumbo cook-off. “What’s gumbo?” they asked. South Louisiana cuisine championed by the likes of celebrity chefs Paul Prudhomme and Emeril Lagasse had yet to go mainstream, but that would soon change.

The first festival drew mostly locals who came to sample homemade gumbo beneath the oaks, drink beer, and listen to a San Antonio band paid with $100 and a case of beer. The cook-off evolved into a larger event in successive years, and by 1990, Bob and his wife, Barbara Engel, along with dozens of other volunteers, had fully embraced the Cajun theme to focus on the sights, sounds, and tastes of south Louisiana.

Dozens of dedicated volunteers rally more than a month before the event to start cooking up signature festival dishes such as crawfish étouffée, boudin sausage, meat pies, and other traditional delicacies.

“People love our Cajun catfish, which we cut in strips and fry in a seasoned corn-flour batter,” says Barbara. “Popcorn shrimp sells out and our crawfish pies and étouffée really go over well, too.”

Dozens of volunteers rally more than a month before the event to start cooking up festival dishes in the Civic Center’s well-equipped commercial kitchen. They can churn out enough to serve up to 6,000 people: 100 pounds of crawfish tails for the étouffée, 200 pounds of rice for the jambalaya and red beans and rice, 600 crawfish pies, and 500 Natchitoches meat pies. Sausage-on-a-stick and brisket tacos add a Texas twist.

Bands, mostly from Lafayette and other Acadian towns, pack the dance floors of two covered pavilions with two-steppers, Cajun waltz aficionados, and zydeco fans. Thousands of revelers, many adorned with Mardi Gras beads and wearing colorful outfits depicting crawfish or gators, stroll the grounds sipping cold beer or homemade sangria, taking occasional breaks to browse arts and craft booths for souvenirs, check out the bands, and sample cook-off gumbo. The stakes are high: Contestants compete for trophies and bragging rights in the amateur, professional, culinary student, and showmanship divisions. There’s even a People’s Choice competition.

The citizens of Lakehills, too, have embraced the festival over the decades, realizing it has given the community an appealing identity in a festival-crazy state.

Barbara believes the Cajun Festival serves an even greater purpose.

“Life can be hard,” she says, “but you can come out here for a day and have a really good time. It creates joy in people’s lives. It’s the Cajun way.”