Written by: Bill Tucker
Photos by: Will van Overbeek 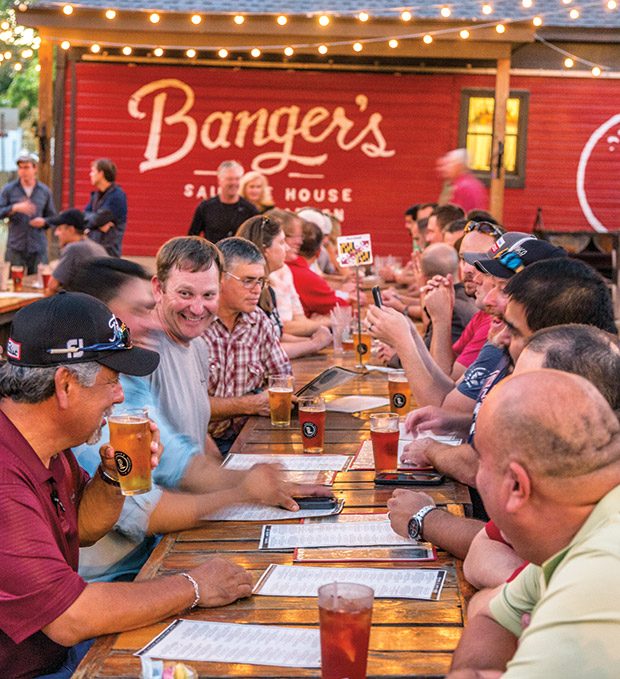 Halfway through a pumpkin porter and a bluegrass song, my Thursday night is humming along nicely. I’m sitting outside at a long wooden table at Banger’s Sausage House & Beer Garden in the heart of Austin’s Rainey Street.

The band has just finished a set, and a crisp breeze speaks of changing seasons. The mouthwatering aroma of smoky bratwurst lingers in the air.

Beer gardens like Banger’s tend to be cozy yet lively—places where strangers become friends over Bavarian lagers, smoked sausage, and conversation. The week before, I had visited the Hill Country village of Fredericksburg to check out The Ausländer Restaurant and Biergarten, a popular beer-drinking destination in one of Texas’ most German-steeped towns. Despite being separated by 75 miles and 90 years, the two spots have a lot in common.

Settled by German immigrants in 1846, Fredericksburg today boasts hundreds of bed-and-breakfast lodgings, many that originated as early 20th-Century “Sunday houses.” These were simple lodgings that served area farmers, who would travel to Fredericksburg from the countryside on Saturday to shop, stay overnight, and attend church the next morning.

In the mid-1930s, one Sunday house on Main Street was converted into a restaurant named Betty’s Café. In the 1960s, out-of-towner Mike Clark moved to Fredericksburg and bought the restaurant. Being a newcomer to the tight-knit community, Clark renamed it The Ausländer, which translates from German as “the outsider.”

The Ausländer’s stone entrance opens up to a large and inviting open-air dining hall. German flags lead to a shaded patio, where I made myself at home with an Oktoberfest ale. With a dozen imported beer taps and 55 bot-tle selections, The Ausländer boasts one of the area’s most interesting beer selections. Full of mostly German varieties with a sprinkling of Belgian wits, the list has a decidedly European feel. The Paulaner Oktoberfest is full of rich, woody malt, and the Westmalle Tripel is one of the best Trappist-style Belgian beers available anywhere.

The Ausländer’s menu—virtually unchanged from the days of Mike Clark—focuses on the dishes and flavors of Germany’s Bavarian region. Local favorites include the jägerschnitzel, a traditional, handmade schnitzel smothered in a red wine mushroom sauce, and the spicy Kasewurst sausage. My pick would be the decadent Krauterbutter Lendenstuck, a nine-ounce beef tenderloin roasted with butter and herbs, served atop a bed of grilled mushrooms. Rich, tender, and earthy, it’s a deceptively simple yet delicious dish. And if you’re not in the mood for German fare, the Ausländer also offers up American favorites like spinach-stuffed salmon and stuffed portabella mushrooms.

The Ausländer hosts live music every Friday and Saturday night, and the restaurant is one of the few places in town that welcomes pets. From the food to the beer to the vibe, the locals have been loving this Fredericksburg original for more than 80 years.

Some 75 miles west, in the heart of Austin’s commercially rezoned Rainey Street neighborhood, Banger’s Sausage House & Beer Garden brings a taste of German heritage to the Texas capital. Inspired by the late-night foodstuffs of his college days at the University of Texas, owner Ben Siegel renovated a 1930s bungalow and opened the sausage house of his dreams in summer 2012. The menu here draws on global influences to keep things interesting and fresh. The chunky German potato salad benefits from balanced acidity, while the currywurst, a combination plate of sliced sausage atop a pile of French fries topped with curry ketchup, dances between savory-sweet and spicy. Banger’s even offers poutine, that classic Canadian street food comprised of fries, cheese curds, and mushroom gravy.

The list of more than 30 specialty sausages is equally impressive. Gourmet options like the incredibly complex links made of duck, bacon, and figs complement classics like spicy Cajun andouille and mild bratwurst. Topped with crisp sauerkraut and backed by the horseradish burn of homemade mustard, the brat is a balanced bit of sausage heaven.

And what goes better with sausage than beer? With more than 100 taps, the Banger’s beer list is one of the largest in Austin. Curated by a committee of beer-loving employees, the tap wall features everything from local favorites like the citrusy Live Oak Hefewizen to hard-to-find Belgian quads and West Coast double IPAs.

The Banger’s experience doesn’t stop with food and drink. The restaurant features regular live music, as well as a small off-leash dog park. At night, the outdoor space glows warmly thanks to strings of yellow lights. With a band on stage, pups playing in the dog park, and the smell of smoked meat wafting through the air, Banger’s feels like a haven from the Rainey Street crowd. According to Siegel, that’s the entire point.

“Some of the highest compliments we get are when people tell us, ‘this is the first place we take out-of-town guests.’ Weaving our way into the fabric of Austin is incredibly exciting and grat-ifying to us,” he says.

And that’s what connects the old and the new: a devotion to the communities they serve. The Ausländer pays tribute to the area’s rich German heritage while Banger’s keeps true to Austin’s easygoing culture in the midst of massive expansion. Yet the missions of both restaurants go hand in hand: to create a place where longtime friends gather and new friendships are made, all fueled by good food and great beer. Saddle up to a bench and grab a pint. Your new favorite beer garden awaits.