Sip and shop at The Owl in Elgin 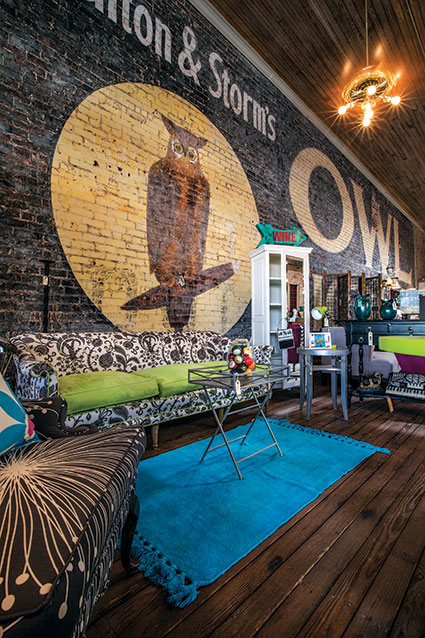 It’s a few minutes before happy hour on a Wednesday afternoon, and I’m playing a game with myself at The Owl, a two-year-old home-goods shop and wine bar in historic downtown Elgin.

There’s a cluster of women at the front of the shop chatting about the weekly farmers market, and before the clock strikes 5 and we all gather at the antique wooden bar for a glass of chardonnay and a cheese plate, I’m trying to find all the owls incorporated into the décor and merchandise. There’s an owl-themed wall tapestry, an owl paperweight, owl candleholders, an owl mirror, and a pair of owl-bedazzled flower vases—all of which play second fiddle to The Owl’s pièce de résistance: a 60-foot-long, floor-to-ceiling mural of an owl—perched on a cigar, no less—painted more than a century ago to advertise Straighton & Storm’s/Owl Cigar Company.

“It was painted on the exterior wall of the adjacent building to advertise cigars, then plastered over when our building was erected next door in 1901,” says co-owner Molly Alexander. “So it wasn’t exposed to the elements for very long. It was rediscovered in 1990, when a production company from Houston was here filming scenes for the TV movie In Broad Daylight. The director liked the brick walls, and asked if they could remove some of the plaster. And when they did, they found the mural.”

Originally a dry-goods store, the building was restored almost a century after its construction by a local artist and businesswoman named Nancy Lou Webster, who invested hours of sweat equity refurbishing the shop’s original skylight, pine floors, and front doors. She added a patio and an arbor, and she hired a local blacksmith to craft a wrought-iron patio gate depicting an oak with spreading branches, which casts intricate shadows when the light’s right.

The owl mural and sun-dappled patio create a warm ambiance for winding down over live music on the weekends. Molly’s partner Gary Luedecke, a sound engineer and mixed-media artist, brings in a diverse roster of musicians and spoken-word artists from Elgin and nearby Austin. On a typical Saturday night, guests gather on sofas and chairs throughout the shop and outside on the vine-shaded patio, sipping, shopping, and relaxing amid a carefully designed blend of antiques, repurposed industrial pieces, and Mid-Century Modern décor items. The menu is small—think cheese, olives, hummus, and a solid but limited wine and beer list—but you don’t come to The Owl for a culinary adventure. “We want this to be an extension of our living room, and a place to nurture talent and present well-designed, interesting pieces that might go well in your living room,” says Molly. “And the wooden floors and ceiling make for great acoustics. Jimmy LaFave walked in here last Saturday night and said it sounded amazing.”

Of course, plenty of people frequent The Owl without enjoying the bar or live music. On my most recent visit, I found myself tempted by cut-crystal whiskey decanters, an elementary-school globe from the 1960s, a well-priced Hamadan rug, a vintage orange Princess phone, and a gorgeous set of upholstered walnut chairs from the 1950s. But ultimately I made a single purchase—an enameled yellow dog-biscuit can that I’m guessing was originally a container for Charles’ Chips, a company that once delivered potato chips door-to-door across America. It fits the repurposed theme that rings true not only at The Owl, but also throughout Elgin’s downtown district, where a few antiques stores do brisk business and a dozen or so additional 1900s buildings await restoration.