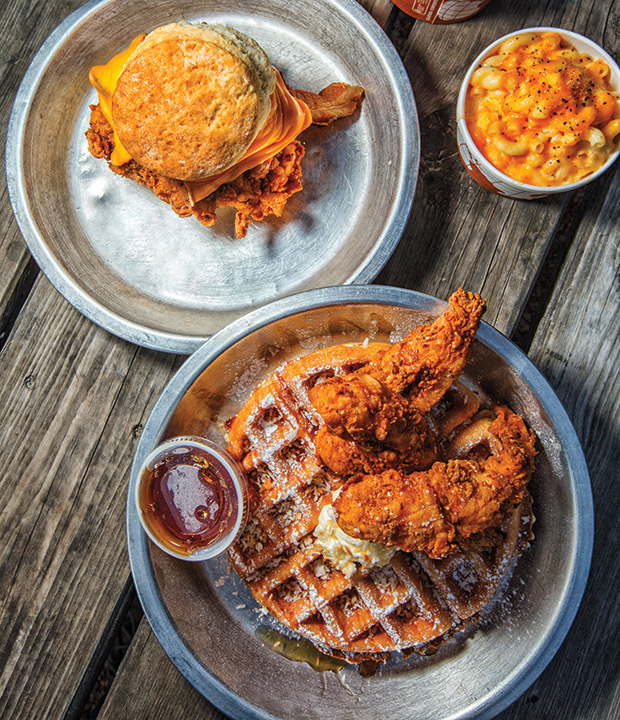 Before opening his restaurant Chicken Scratch in Dallas, Chef Tim Byres and a couple of friends made a five-day, 2,500-mile road trip across parts of the South and Midwest on a quest for chicken-fried inspiration.

Regional characteristics revealed themselves along the way, Byres said: the cayenne-infused spiciness of “hot chicken” in Nashville, the buttermilk-battered crispy crusts of Kentucky, and the Thanksgiving-like spreads associated with Sunday fried-chicken dinners in Oklahoma. Byres summoned such influences—both in a culinary and atmospheric sense—for Chicken Scratch, which opened in 2012 featuring chicken (fried and otherwise) in a casual beer garden with a play area for children and an outdoor music stage.

“I think there’s a big turn to nostalgic American things, and you see a lot of that in food like fried chicken and barbecue,” said Byres, a 2014 James Beard Award winner for his cookbook, Smoke: New Firewood Cooking, and the culinary creator behind the Dallas barbecue restaurant SMOKE. “That was part of the idea for Chicken Scratch. You know how when you were a kid, and on the Fourth of July you went to the park and threw the blanket out? That’s what it’s meant to be, an overall experience, with the courtyard and music. We went with fried chicken because it just seemed to make sense for that kind of family feeling.”

Nostalgia is surely a factor in the renaissance of the comfort-food staple as a focus of trendy restaurants across the state. (Lucy’s in Austin, Houston-based Max’s Wine Dive, and Sissy’s in Dallas are a few other examples.)
But let’s face it: Fried chicken never went out of style. It’s too delicious. These newer eateries are just offering welcome attention and variations to a dish that has long drawn legions to stalwarts like Babe’s Chicken Dinner House in Roanoke, Allen’s Family Style Meals in Sweetwater, and the Barbecue Inn in Houston.

Set in a semi-industrial West Dallas neighborhood just a few blocks from the Margaret Hunt Hill Bridge, Chicken Scratch and the adjoining bar, a sister business called The Foundry, share a large courtyard with a cactus garden and picnic tables shaded in daytime by a lofty elm tree, and brightened come evening by string lights. There are monkey bars and half-buried tires that beckon kids to climb, and a spigot and drinking bowls for dogs. In keeping with the neighborhood’s industrial character, a strip of several shipping containers—cut open on the side to provide covered seating—lines one edge of the courtyard, and an imaginative stage comprised of stacked pallets hems another (bands play most weekend nights in the warmer months).

Chicken Scratch, which also has indoor seating, serves various chicken plates, including fried chicken strips and boneless thighs, as well as bone-in legs, wings, and thighs; pecan-wood rotisserie chicken; and stewed-chicken tacos. Byres said the restaurant’s most popular dishes of late have been its “knife and fork biscuit sandwiches.” The sandwiches come in a few different configurations, including the decadent, six-inch-tall Foundry: a split buttermilk biscuit, crispy and chewy, enveloping a fried chicken thigh layered with mashed potatoes, hefty bacon slices, beer mustard, a couple of American cheese slices, and a touch of oregano vinegar honey. Another treat is the Chicken and Coconut Waffle, a buttery waffle served with a strip of fried chicken and coconut-maple-chili syrup.

In both dishes, the surrounding cast of characters, such as the hearty mashed potatoes on the biscuit sandwich and the sweet syrup on the waffle, accentuate the spice and tang of the crispy chicken. The kitchen creates the savory chicken flavor, Byres said, by brining the meat in lemon-sage salt water and then coating it in flour spiced with salt, cumin, and pepper. After deep-frying, the chicken is drizzled in a touch of white vinegar and a bit of honey that’s infused with fresh oregano. Depending on the dish, the cook then puts a few pickle slices on top for that “spicy-sour-vegetabley flavor,” Byres said, noting he picked up the pickle technique from his mother.

“Fried chicken is mainstream in the sense that everybody knows it, but that’s also difficult because everybody has their own style and flavor as they remember it as kids,” Byres said. “It’s kind of like brisket in Texas; everyone will fight you over it. You can’t compete with a memory, but we’re not trying to. At Chicken Scratch we just do our fun take on it.”

And gathering with friends and family over plates of Chicken Scratch’s fried-chicken dishes certainly is fun, whether you’re making new memories or waxing nostalgic about the past.