Denton’s famous burgers, with a side of music 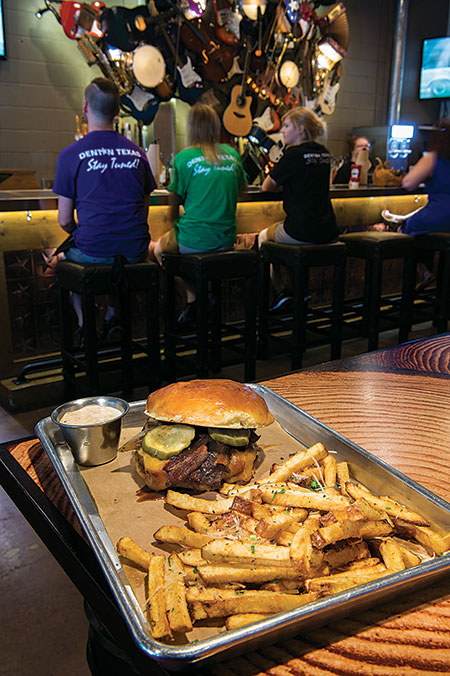 While Austin has dubbed itself the “live music capital of the world,” Denton—home to the University of North Texas’ renowned College of Music—quietly plays on as a world-class incubator of musical talent.

With a rootsy vibe that locals describe as “Austin circa 1978,” Denton has nurtured the careers of notable artists like Meat Loaf, Roy Orbison, Norah Jones, and recent Grammy winner Snarky Puppy.

So when the popular Denton Independent Hamburger Company set to close its doors after decades on the downtown square, Texas singer-songwriter Jon Christopher Davis and his business partner John “Sparky” Pearson knew they’d found the perfect location for a restaurant celebrating Texas music. “Texas music is a big ol’ bowl of alphabet soup,” says Davis, “and we wanted to pay homage to the legends.” The two named their restaurant after Davis’ popular honky-tonk tribute to Texas bravado, the song “Lone Star Attitude.”

The menu features an array of burgers named after Texas musicians, like the Stevie (blue cheese, bacon, and hot sauce) and the Chili Willie (chili, cheddar, onion, and serranos). LSA Burger Co. is at 113 W. Hickory St. in Denton. Call 940/383-1022.

With LSA Burger Co., which opened in November 2013, Davis and Pearson sought to honor the musicians of Texas’ past and provide a performance venue for emerging new talent, all while cranking out creative burgers and serving local brews.

When my husband Matt and I visit LSA Burger during a recent weekend getaway, our first dilemma is deciding where to sit. LSA’s interior provides sleek red booths punctuated with music-centered art like concert posters and albums from Texas artists such as Meat Loaf and Buddy Holly. And there’s the pièce de résistance—a sprawling mural titled The Great Texas Supper, which covers most of the restaurant’s eastern wall. Modeled after the Leonardo Da Vinci painting, the mural features a laughing Jesus sharing burgers and fries with 12 Texas musical greats, including George Jones, Janis Joplin, and Willie Nelson.

Above the steel-topped bar hangs a large-scale sculpture called Texas Instruments. It features wire mesh fashioned in the shape of Texas and filled with a collage of instruments including guitars, violins, horns, and amplifiers. A strategically placed guitar painted with a lone white star pays subtle tribute to Denton’s place on the map.

Even a trip to the bathroom proves entertaining. The restroom door boasts a life-size print of Uvalde’s Dale Evans, the “Queen of the West,” wearing a fringed gold shirt, white cowgirl boots, and a wide-brimmed hat. I’m excited to tell Matt that one stall featured a framed black-and-white photo of Tripping Daisy, a Dallas pop-rock band whose career he followed in the 1990s. Music trivia plays over the bathroom speakers, so while freshening up, I learn about the early years of Eagles legend and Gilmer native Don Henley.

But we decide to forsake the artwork and air conditioning in favor of live music on the rooftop patio. The balmy evening beckons us up two flights of stairs painted to resemble piano keys. On the roof, we find a wooden bar decorated with album covers from Davis’ personal collection and topped off with a beer-bottle chandelier.

We’re also mesmerized by one of the best views in Denton, as the stage overlooks the 1895 courthouse. That structure’s blend of Romanesque Revival and Second Empire architecture provides a striking backdrop for the musicians who take the stage four nights a week.

We have a bird’s-eye view of the bustling square, watching pedestrians meander between the antiques stores and specialty shops. Fiddles abound on the courthouse lawn, where impromptu concerts seem de rigueur. Families and groups of friends toss footballs and Frisbees, while we simply relax and enjoy the prime people-watching vantage point.

Meanwhile, local legends Bonnie and Nick Norris take the stage, playing original folk and country tunes as well as covering works ranging from Patsy Cline to Henry Mancini. I appreciate the upright bassist’s devotion all the more after watching him lug that hulking instrument up so many piano-keyed stairs in the summer heat.

The menu features an array of burgers named after Texas musicians, like the Stevie (blue cheese, bacon, and hot sauce) and the Chili Willie (chili, cheddar, onion, and serranos). The “Not Burgers” section tempts us with offerings like the Janis (a crab cake, arugula, and pickled red onion combo) and the Norah (a Mediterranean-style marriage of grilled lamb, feta cheese, and tomato). For vegetarians, the Bohemian features a spicy brown-rice-and-black-bean patty topped with pepper jack cheese, spinach, and tomato.

Since Matt orders a classic Waylon burger—topped with lettuce, tomato, pickles, and onions—I decide to branch out and order tortilla soup. The steaming soup, thick as stew, brims with chunks of avocado, gooey strings of melted cheddar, and spices such as cumin and chile powder.

We also share an order of garlic Parmesan-and-parsley French fries. After tasting one, I pause a moment, weighing my words before pronouncing,“These are the best fries I’ve ever had!” The Parmesan adds such delicate richness that we don’t even dream of adding a squirt of ketchup.

Come sunset, the patio’s tin ceiling and the courthouse’s sprawling oaks twinkle with hundreds of white lights, making the scene even more magical. Relishing the golden glow falling upon the stage and the salty pucker of a margarita, I think of the lyrics to a classic Willie Nelson song: “The life I love is making music with my friends. And I can’t wait to get on the road again.” But I have to disagree with Willie this time; I’d be content to stay here at LSA Burger for a long while.