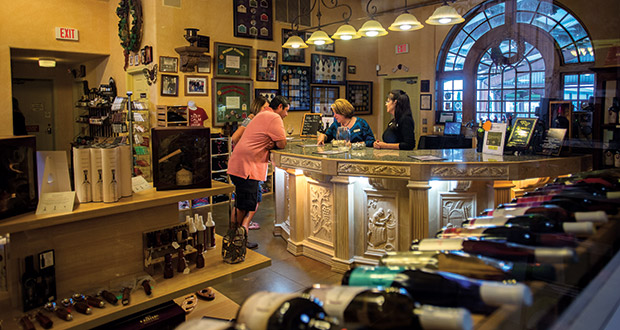 Engineer-turned-wine-maker Raymond Haak and his wife, Gladys, didn’t intend to stir up controversy when they started making Texas Madeira at their winery in Galveston County.

Joe’s Barbeque Company, at 1400 E. Texas 6 in Alvin, makes a good lunch or dinner stop en route to (or from) a visit to Haak Vineyards. The rambling restaurant, which is decorated with kitschy signs and ephemera from its nearly 40 years in business, today serves hundreds of people daily, who come for smoked brisket, ham, sausage, turkey, and chicken (plus a loaded salad, soup, and potato bar). Open daily. Call 281/331-9626.

The couple, who had been making wine from blanc du bois, Jacquez, and other grapes since they opened their winery in 2000, had brought some of their port to a symposium at Fall Creek Vineyards in 2004. When they offered it for a tasting, Master of Wine D.C. Flynt remarked that it tasted a lot like Madeira, a fortified wine from the Portuguese islands of Madeira. He wondered: Had they ever considered making a Texas Madeira?

After all, Madeira was the libation of choice in early America, and in early Texas. The U.S. founding fathers toasted with glasses of Madeira upon signing the Declaration of Independence in 1776, and after George Washington was sworn in as the first president of the United States of America in 1789, reports of his inaugural party included Washington’s Madeira-stoked minuets. Here in the Lone Star State, colorful politician Sam Houston, the first elected president of the Republic of Texas and a dedicated tippler for most of his life, also favored Madeira.

It’s not really surprising: In those days, most other wines simply weren’t available. European table wines deteriorated during the long journey to the Americas, but Madeira was, and is, different. Madeira was first made in the 1700s by happy accident, when ships loaded with port embarked on the six-month journey from Portugual to the New World, where the wine was exposed to heat, agitation, and oxygen—normally wine’s nemeses. When the buyers tasted it, though, they found that the port had actually improved in its casks, taking on complex flavors of caramel, roasted nuts, and stewed fruit. Madeira makers these days employ other heating methods, of course, most often a heated cellar called an estufa.

Intrigued by the potential, the Haaks booked a trip to Portugal, tasted a lot of Madeira, and talked to Portuguese winemakers about the centuries-old process. When they returned to their winery on the Texas Gulf Coast, Raymond built a custom estufa on his family land in Santa Fe, stocked it for six months with his Texas port, and then aged the wine for three years in toasted American oak barrels. “I produced my first Texas Madeira in 2006, but until I had the label approved by the government, I couldn’t call it Madeira,” says Raymond. “It was down to the wire; I got approved two weeks before the laws changed.” And yes, there are wine professionals who oppose their use of the “Madeira” name, asserting it should be used only for wines made in Portugal. “That won’t stop me from enjoying the Haaks’ delicious fortified wine, though,” says Austin sommelier and wine writer Matt McGinnis with a smile.

Raymond isn’t interested in taking that fight to the ring, anyway. Growing grapes 20 miles from the ocean is challenge enough. But it’s the same challenge, Raymond says, that winemakers throughout the entire state face: finding the right grape. “When we first started making wine here, back in the 1970s, I tried cabernet sauvignon, petite syrah, merlot, champanel,” he says. “I was told they wouldn’t do well on the Gulf Coast, because we have Pierce’s disease down here. I was stubborn and thought, ‘How would they know? They haven’t tried growing in Santa Fe.’ In a few years, though, all my vines died. The experts were right.” 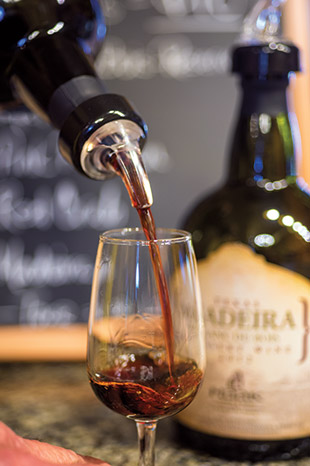 A few years later, the Haaks discovered a hybrid grape from Florida called blanc du bois, which is resistant to Pierce’s disease. While they grow a few acres of blanc du bois on site, the Haaks source the majority of their grapes from the Cat Springs and Conroe areas. “It has been a great grape for us,” says Raymond. Winemaker Marta Sanchez, who hails from Madrid but came to Texas by way of New Mexico, makes seven different wine styles with blanc du bois, most of which visitors can sample on a tour of the winery and vineyard.

Flanked by tall Italian cypresses, antique roses, and jaggedy sago palms, the winery consists of a gift shop and tasting room, a cozy outdoor patio overlooking a few acres of grapevines, a cellar packed with wine barrels, and a wedding chapel and ballroom with wide barn doors that are flung open when the weather’s nice. You can see the entire operation, including the estu-fa, the presses, and the “library” where the Haaks keep their rarest Madeiras, on a tour ($10), which also includes a sampler flight of four wines and a Madeira, either the tawny blanc du bois (redolent of apricot and caramel) or the crimson Jacquez (which tastes of plums, nuts, and chocolate). It’s easy enough to accomplish an impromptu picnic overlooking the vineyards by purchasing olives, cheese, crackers, and other edibles, which you’ll find among the glasses, chilling spouts, T-shirts, wine charms, and other goods for sale in the gift shop.

And the Haaks have seen success in recent years with events such as a “Swine and Wine Cooking Competition” (August 2 this year) and a Saturday Summer Concert Series, complete with such food offerings as shrimp étouffée, charcuterie plates, and burgers, plus wines and wine-based cocktails.

“We’ve been playing around with recipes,” says Raymond. “Instead of a Manhattan, which contains bourbon, we’ll do a Mad-hattan with our Madeira.”

After all, the Haaks know how to heat things up.