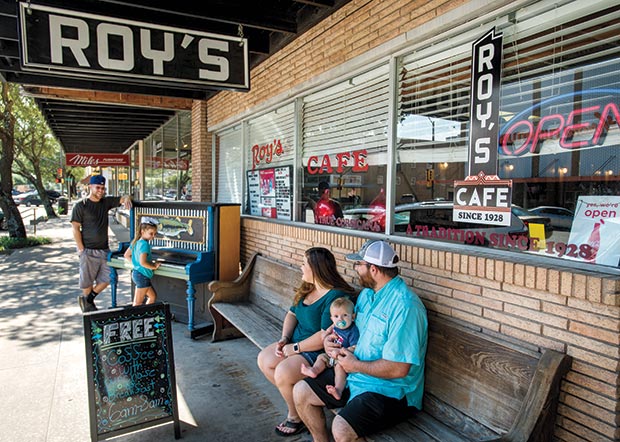 Driving the 240 miles of Interstate 45 between Dallas and Houston reveals gentle changes in elevation, pastures in the north, pine forests farther south, and a relief from big-city traffic. If you are hungry and looking for an alternative to fast food, a few minutes’ diversion from the highway allows for some satisfying small-town Texas dining. Such options provide a respite from construction zones and 18-wheelers, with no charge for the smiles of hometown servers.

Before the internet, word-of-mouth was the reliable way to locate small-town eateries. Social media now connects potential customers and eliminates guesswork about operating hours. With help from your GPS, try these three local gems that combine hospitality, home cooking, and history for your I-45 journey.

The Walker’s Dip sandwich, per-haps the best-known item at this popular downtown Madisonville diner, features savory beef, Swiss cheese, and sautéed bell peppers and onion in a jalapeño-cheese sourdough bun. To really accentuate the sandwich’s beefy flavor, dunk it bite-by-bite into the accompanying cup of aromatic brown broth. A side of house-made potato chips comes with ranch dressing for dipping.

With help from your GPS, try these three local gems that combine hospitality, home cooking, and history.

“Enter as strangers. Leave as friends,” proclaims a sign on the wall. Co-owners Angela Culbreth and Noella Smith personify that motto, greeting customers as they work the cash register or serve ice cream from the original marble 1920s soda fountain. Antique roof panels dress up the cash-register stand, remnants of a remodel a few years ago that also revealed the building’s construction in 1886. “We had no idea when we bought it in 2008 that the building was so old,” Angela says.

The two brought in reproductions of classic midcentury soda-fountain stools, and they honor the café’s past with 25-cent coffee, with free refills. Another perk is a complimentary scoop of ice cream with an entrée order. Waiter Kathryn Ziebell might take your order wearing 1940s garb—open-collar blouse, pencil skirt, and seamed hosiery, which she buys from a World War II-era supplier in England. She also has outfits from the ’50s and ’60s.

No parking along Main Street? No problem. Circle around back and pull up next to the horse trailers and pick-up trucks, then enter through the back door. Located just inside is Angela’s “Cowboy Table.” True to its name, ranch hands sit in a circle in worn jeans, dusty boots, and maybe a set of spurs. 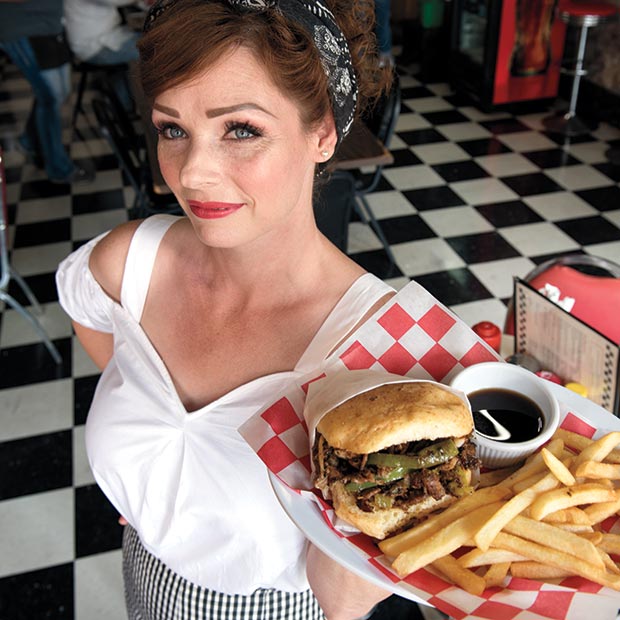 If you’re the type who prefers breakfast at lunchtime, Roy’s Cafe, which dates to the 1920s, can oblige. There is even a breakfast-lunch crossover option—the Chicken Fried Steak Breakfast Platter, which features two crunchy CFS cutlets paired with scrambled eggs and hash browns. Roy’s biscuits, the handiwork of longtime cook Nadia Chavez, have enough heft to support cream gravy, as opposed to being flaky.

“She cooks her biscuits with love,” says Cynthia Eslick, the café’s hostess and manager. Of popular menu standouts like the café’s succulent pork chops, Cynthia explains, “We choose our items by thinking about our history and what everyone has grown up eating for many years.”

The specials, with sides such as squash casserole, okra and tomatoes, or butter beans, cost $8.95, with dessert included. Another best bet: Roy’s crunchy, hand-cut, and hand-battered onion rings, served in a neat stack on a side plate.

On any given Saturday, Beaton Street, where Roy’s is a mainstay, hums with townsfolk and visitors shopping, dining, and sightseeing. A collection of painted pianos adorns the downtown area’s sidewalks, as do bronze statues of local legends like Coach Jim Acree, who led Corsicana High’s football team to a state championship in 1963. Still, the handwritten sign on one shop’s door is a reminder this is a close-knit community: “Gone to a funeral. Be back at 12:00.”

Sam’s is not a secret, serving up to 7,000 meals a week at its longtime location at I-45’s Fairfield exit. Brisket, sausage, and ribs—smoked on-site nightly—remain a staple, the legacy of the late Samuel and Doris Daniel, who in 1953 opened a modest barbecue stand with a sawdust floor, eventually expanding to the current location. The family operation is now in its third generation.

“I have six kids and know how important it is to have a good meal while traveling,” says Gilbert “Sonny” Daniel, Sam’s grandson, who helps run the restaurant with his father, also named Gilbert. “It’s great to be able to stop, have a hearty or healthy meal, stretch your legs, and be back on the road quickly.” The menu has dozens of non-barbecue choices for breakfast, lunch, and dinner, though many patrons choose instead to graze the 44-foot buffet and nearby dessert cart.

Burgers are great here, and the proprietary beef-and-pork sausage blend comes from a local meat processor, operated for decades by another Fairfield family. Sonny’s late grandmother provided the pie recipes, and she helped bake them until retiring in 2001. Though Sam’s seats 325 customers, table service remains personal. Near a collection of joined-together tables with multiple family members taking turns at the buffet, two waitresses abided a couple who simply wanted a sandwich to-go during the crowded lunch hour. The wait time for placing and receiving the order was short, then they were back on the road. According to Sonny Daniel, customers have been doing that for 50 years.