Step back in time at Waco’s Cupp’s Drive Inn 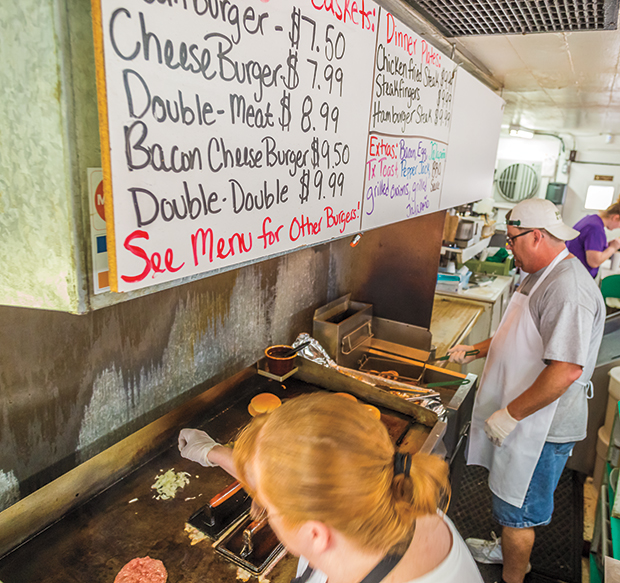 Co-owner Freddie Johnson mans the counter and the grill at Cupp’s Drive Inn, a Waco staple since 1947.

Now that In-N-Out Burger has opened dozens of locations in Texas, there have been raves—as well as scattered “mehs”—for the California chain. But as a frequent highway traveler, with both a non-chain mindset and a “make good time” mantra, I prefer the burgers served at independent joints near freeway exits. These are the stops you relish on the road, places like Willy Burger in Beaumont, off I-10, and Carpenter Hamburgers in Corsicana, less than a mile from I-45. You get your old-fashioned cheeseburger fix, and then you’re back on the freeway in three minutes or less.

One of my favorites of these “Off-N-On” burger joints is Cupp’s Drive Inn of Waco, just a Hail Mary pass from the 18th Street exit off I-35. Opened in 1929 as Heaton’s and bought by the Cupp family in 1947, this small white building has room for eight stools at the counter and four booths, plus five tables outside for overflow. They fill up on Baylor home football game days as the university is just down the road.

Cupp’s is home of the classic Texas diner cheeseburger. Back in the 1950s, Cupp’s had car service, and a young soldier from Fort Hood named Elvis Presley would occasionally sneak a double cheeseburger with bacon in the back seat of family friend Eddie Fadal’s Cadillac. During his six months of Army training in 1959, Elvis retreated on weekends to Waco, where Fadal, a former DJ whom Elvis met on one of his earliest tours of Texas, built an addition on his house for Presley and filled it with records and TVs. Willie Nelson, from nearby Abbott, has been eating at Cupp’s since the late ’40s.

Cupp’s is Happy Days without the jukebox and the Fonz, where Richie Cunningham is now a professor at Baylor who stops in at least once a week to taste his childhood. “Some burger places run their buns through a conveyor belt to heat them,” said Freddie Johnson, who owns Cupp’s with younger sister Sherry Caughenbaugh. “But there’s nothing like toasting them on the grill.”

Unless you have a scintillating lunch partner, you’ll want to sit at the counter and watch Freddie and Sherry work the grill, one side of which is filled with face-down buns, while the other side sizzles with quarter-pound patties.
Lettuce, tomatoes, onions, pickles—the usual—go on your cheeseburger at the build station, but for extra flavor, the spatula that’s been flipping those burgers gives a little love tap on the top of each bun.

This is how they’ve always done it at Cupp’s, where change is about as welcome as a tax audit. “Our clientele really hates updates. We used to flat-ten our meat on the grill,” Freddie said, cupping his hand as if it held a ball of hamburger meat, then miming a slap of the spatula. “Thwack! People loved that sound.” But after a few years of doing that 100 times a day or more, it put such a strain on Johnson’s shoulder that he started buying meat in patties.

“I told Sherry the other day, ‘I’m not a customer, I’m a fixture,” said David Ray, 70, who’s been coming to Cupp’s at least twice a week for 33 years. “I love the old-style atmosphere. Some of us weren’t sure when they started using beef patties instead of balling up the meat and poppin’ it on the grill. But it tastes just as good, so we came around on it.”

And most things remain the same. They still use only fresh ingredients, hand-peeling potatoes for french fries, making their own onion rings, and hand-breading the chicken-fried steak. “It’s very labor intensive work,” said Freddie, who turns 50 this year. He’s been working at Cupp’s since 1988, when his mother, Betty, who started working at Cupp’s in 1957 as a carhop, bought the diner from a former waitress named—what else?—Flo. Sherry started working at Cupp’s when she was 13. That was 29 years ago.

Though Baylor students and professors, plus blue-collar Wacoans, make up most of the clientele, Johnson said there’s a new phenomenon bringing folks from all over. In May 2014, Chip and Joanna Gaines of HGTV’s popular Fixer Upper opened Magnolia Market at the Silos, a distinctive shopping experience for fans of the Waco-based home improvement show. “They’re bringing a lot of people to Waco,” said Freddie, adding that he hasn’t seen so many new faces at Cupp’s since the standoff at the Branch Davidian compound in 1993, when members of the international press stayed in motels within walking distance to Cupp’s.

Where Fixer Upper is about remodeling your surroundings, Cupp’s remains resistant to change. They co-exist beautifully, because while Magnolia Market has trendy food trucks and a health-conscious restaurant, sometimes you just gotta have a greasy cheeseburger in an old-timey joint right off the freeway. At the midpoint between Dallas and Austin, this is a stop that makes you happy you decided to drive in-stead of fly.