Written by Lois Rodriguez, Photographs by Will van Overbeek | From the September 2014 issue | Updated: July 10, 2020 | Filed Under: Eat + Drinkmade in texas 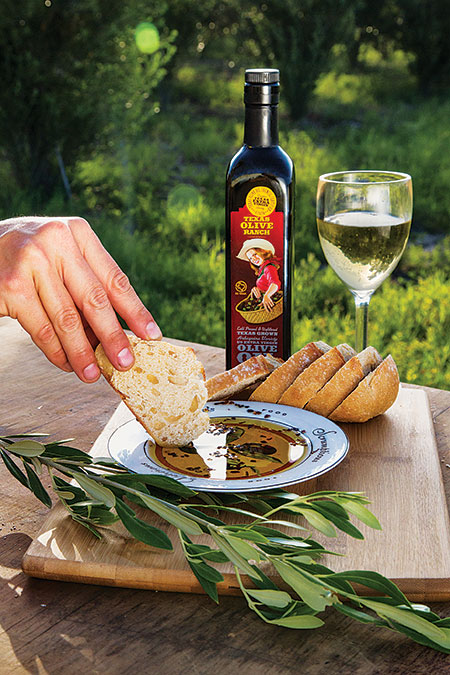 Apparently feral pigs like olives. I am walking through narrow rows of arbequina olive trees on the outskirts of Carrizo Springs with Jim Henry, the man who founded the Texas Olive Council and perhaps knows more about making Texas olive oil than anyone else in the state.

It is late fall, pruning time, and piles of discarded leafy branches and unpicked hard green olives are scattered around our boots. “See that,” he says, pointing to some scat near my foot. “Pig poop. Those feral hogs love to eat my olives.”

I’ve heard about the wild pig problem down here. And I’ve also heard about another kind of South Texas oil boom—the bonanza known as Eagle Ford Shale. But I was surprised to learn about this other, quieter South Texas oil industry, one that’s far tastier: the supremely fresh olive oils that Jim Henry produces here at the Texas Olive Ranch, which, at 40,000 olive trees, is the biggest orchard in the state. There are currently 25 other small orchards in the state, with another 20 in the planning stages.

My love affair with Jim’s olive oil began at a dinner party, where we dunked slices of fresh bread into a saucer of Jim’s olive oil laced with balsamic vinegar and sea salt. It was so delicious that I bought a bottle of that same gold-en olive oil the next day at a farmer’s market in Austin.

And now here I am at the very source, the dry brushlands southeast of Carrizo Springs, from which Jim is coaxing some of the best olive oil in the state. Driving up to the orchard after passing through miles of scrubland full of semis hauling gear for oil fields, I am greeted by rows upon rows of elegant, pale green olive trees, their slim trunks blown slantwise by persistent southeasterly winds. I am in the midst of a thick olive jungle.

And thus began my whirlwind tour and introduction to the process of growing, pressing, and producing olive oil in South Texas. Jim has a lot to say about olives, and he offers tours of his working ranch by appointment. He first fell in love with the tree when he was traveling in Spain and marveled why—at the time—they weren’t grown in Texas. The more Jim learned about growing olives here, the more his obsession grew.

His quest to make olive oil in Texas has been guided by trial, error, and sheer determination. “I was told over and over again that you can’t grow olives in Texas,” Jim says. “I’m still told that today, actually. People say it’s romantic folly.”

Jim planted his first olive trees near Marble Falls in 1993, but “I planted the wrong trees in the wrong place,” he says, and they died. Later, he heard about a few trees that were thriving near Carrizo Springs, and so he investigated. By 2004, he was planting the orchard where we are standing.

Texas A&M horticulturalist Larry Stein says that Texas olive growers face many challenges, chief among them the fluctuating winter temperatures, which cause trees to lose their cold-hardiness. But there are parallels to the Texas wine industry, which has exploded as grape-growers learned which varieties did well here. And since the Texas Olive Ranch’s first big harvest in 2010, production has been good. You can now find colorful rows of Texas Olive Ranch oils with their perky cowgirl labels on the shelves of H-E-B, Whole Foods, specialty stores, and at farmer’s markets. In addition to the extra-virgin oils, the Texas Olive Ranch makes seven dif-
ferent flavored olive oils, including a popular version infused with cracked pepper and chipotle chiles.

But this handsome orchard is small fry compared to what’s next. Jim is currently planting more than 200,000 olive saplings at a new orchard near Victoria, a region of South Texas he thinks will be even more favorable for his arbequinas. At the Carrizo Springs orchard, Jim has one press that can produce two tons of olive oil an hour; Victoria’s orchard will have three new presses making 13 tons an hour, as well as a tasting room, a gift shop, an education center, and an observation room for watching the olive presses in action during harvest.