These Pickles Are Worth Relishing

The Best Pickles in Texas, If Not the World 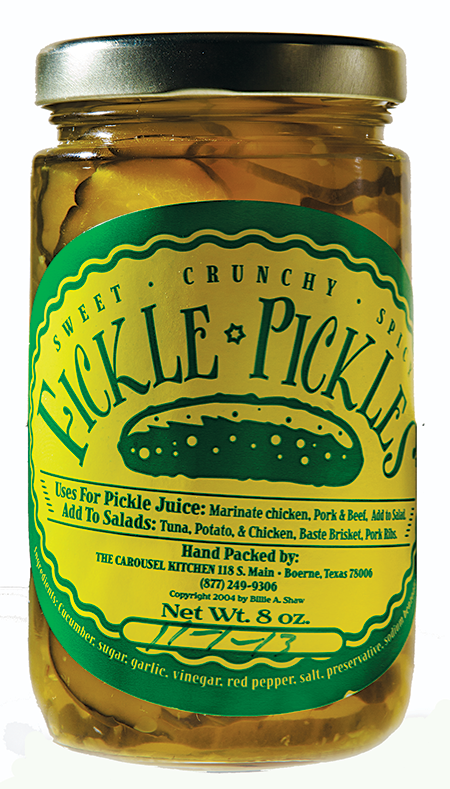 Most antiques stores discourage eating while shopping. Carousel Antiques and Fickle Pickles in Boerne is different. The shop encourages spontaneous nibbling while browsing and keeps a sample plate of its homemade Fickle Pickles near the cash register. Visitors can pluck a pickle—or two; it’s impossible to stop at just one—and enjoy what many consider to be some of the best pickles in Texas, if not the world. The crisp, crinkle-cut pickles start off sweet but quickly take a spicy turn.

Besides buying them in Boerne or at Carousel’s sister shop in Gruene, the only way to get a jar of the crunchy, sweet-yet-spicy dills is by placing an order over the phone. The pickles come in two varieties (original or extra spicy) and three sizes (ranging from eight to 26 ounces). Despite having a website, Fickle Pickles doesn’t accept online orders. Instead, customers must call the “pickle hotline,” which sends calls to a green, pickle-shaped phone the owners found at a trade show. And call they do, with orders coming in from as far away as Alaska, Japan, and Finland. Many of the regulars have never set foot inside the shops, so they haven’t experienced the hodgepodge of other goods for sale, such as vintage Coca-Cola signs, dolls, hand-forged tools, and glassware. Instead, they learned about Fickle Pickles through word of mouth or by receiving a gift from friends or relatives.

Antiques dealer Billie A. Shaw created the recipe in her home kitchen at least three decades ago, and started selling them in her Boerne shop, Carousel Antiques, around 1987. At first, she gave away samples of the pickles to help bring in customers, and soon earned the nickname “the Pickle Lady.” The pickles soon became as popular as
the antiques, and before too long, Billie renamed her shop Carousel Antiques
and Fickle Pickles.

Billie passed away in 2008, and today, Lisa Obriotti, Billie’s only daughter, runs the business with her husband, Jake. They still make the pickles the way Billie did, slicing each cucumber by hand, swirling in a secret concoction of spices, and bottling and labeling each jar. To keep up with demand, the Fickle Pickle operation eventually moved to a nearby industrial-size kitchen. Like her mother, Lisa has earned her own moniker: “the Pickle Lady’s Daughter.”

“Sometimes people mistake me for the Pickle Lady, but that was my mother,” says Lisa. “It was her hard work for so many years that built the company.”

Lisa was in her 20s when her mother, an avid cook, began pickling cucumbers from the family garden. “I remember her saying, ‘You have to try these,’” Lisa says. “I thought they were fantastic. I love seeing peoples’ reactions when they try them at the store. Once they taste them, it’s done. I love to watch their faces, doubting you, thinking they’re just dill pickles. It’s a very easy sell.”

Fickle Pickles also has its share of celebrity admirers, like actor Pierce Brosnan and former model Cheryl Tiegs. President George W. Bush even visited during his Texas gubernatorial campaign in 1994 to pick up a few jars. “He was doing a caravan tour, and one of his colleagues contacted my mother, telling her the day and time he would be coming to town,” says Lisa. “He was four hours late, so when he walked in, she scolded him, good-naturedly, of course.”

It’s that down-home kind of attitude—not to mention the addictive quality of the pickles—that has kept Fickle Pickles in business all this time. In recent years, the company has added jars of marinade to the inventory, which Lisa says is great on chicken or shrimp. She has also come up with a number of recipes starring the spicy-sweet pickles, which she readily shares with customers. “Our pickles make wonderful deviled eggs and potato salad,” she says.

And while Lisa knows that the next logical step would be to add online ordering, she’s hesitant to do so. “We have some of the nicest customers in the world, and I love talking to them,” she says. “I know we need to eventually make the transition to online, but phone ordering works well for us for now. If we changed it, I’d really miss doing it the old way.” 