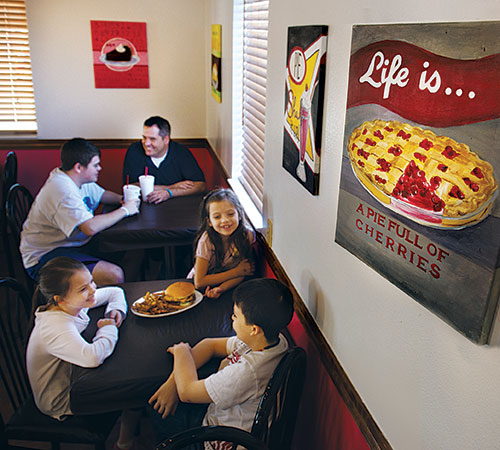 Pie captured my heart decades ago, when it was a menu staple of the small-town cafeteria where my extended family frequently gathered.

The love affair has proven long and lasting, and today I find it difficult to name a variety of pie that I don’t like. So when I heard about an intriguing “pie shake” causing a stir across the Metroplex, I knew I had to try it. Accompanied by eager co-conspirators in the form of my husband and children, I made the short trek from our Dallas home to Mesquite, where Scrumbscious Burger & Pie Company serves the creamy treats (plus burgers, fries, onion rings, and pies galore) in a red brick building on the edge of the town’s historic district. Come late September, you can also find Scrumbscious PieShakes at the State Fair of Texas, where they debuted last year to rave reviews. 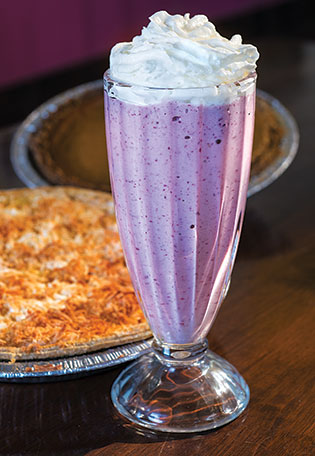 Owners Chris and Sherry Howard run Scrumbscious with help from their eight children, and other family members have pitched in with recipes, ideas, and even décor. The dining room, for example, features whimsical pie-themed artwork created by Sherry’s sister and father; one painting juxtaposes a slice of chocolate pie with the mathematical constant pi, and another shows a slice of lemon pie with the tongue-in-cheek motto, “When life gives you lemons, make pie.”

The serendipitous melding of pie and ice cream began just a few years ago. Sherry, who first baked pies as a youngster alongside her grandmother, worked for years perfecting her pie recipes for family celebrations. She slowly built a following by selling pies online and at area festivals. One year, after filling a Thanksgiving order of 300 pies, she had a dozen or so left over—but her kids complained they’d had enough of a good thing. So Sherry threw some of the leftover pie slices into a blender with some ice cream, and the Scrumbscious PieShake was born.

These days, Scrumbscious offers PieShakes in more than two dozen flavors, but the menu also includes savory fare like salads and hamburgers. So, before digging into the star attraction, we chow down on some juicy burgers, along with hand-cut onion rings and crisp French fries. As I dip a fry into the zesty house sauce—a spicy concoction resembling Creole remoulade—I start to ask Chris for the recipe. But my husband elbows me and points to a sign on the wall that says: “Fry Sauce: Don’t ask, cuz we won’t tell! It is kind of a big deal.”

Finally, the moment of truth arrives as we survey our smorgasbord of PieShakes; we’ve ordered several to share so that we can sample multiple flavors. As I take my first sip of Razzleberry—a vibrant, pink-and-purple-speckled shake made with Sherry’s signature pie (a raspberry and blackberry combo)—I wonder how hunks of pie will fit through a straw. But the pie is smoothly blended into the ice cream, adding not so much of a textural element as it does decadence and depth of flavor.

Each version I sample is my new favorite, and it’s impossible to declare a frontrunner. In the sweet potato PieShake, the ice cream contrasts with warming spices like cinnamon and nutmeg. The pecan PieShake brings delicious caramelization and crunch to the mix. And the buttermilk-chess PieShake presents a lovely tang that perfectly complements the sweet ice cream.

Alas, we can’t finish them all. But we’ll be back for more. And Chris assures me that soon it will be even easier to get a PieShake fix, as he has acquired a food truck and plans to hit the streets of Dallas this summer. I’ll quite literally drink to that—the only question is: What flavor?