A fruit Cup on Steroids in Laredo 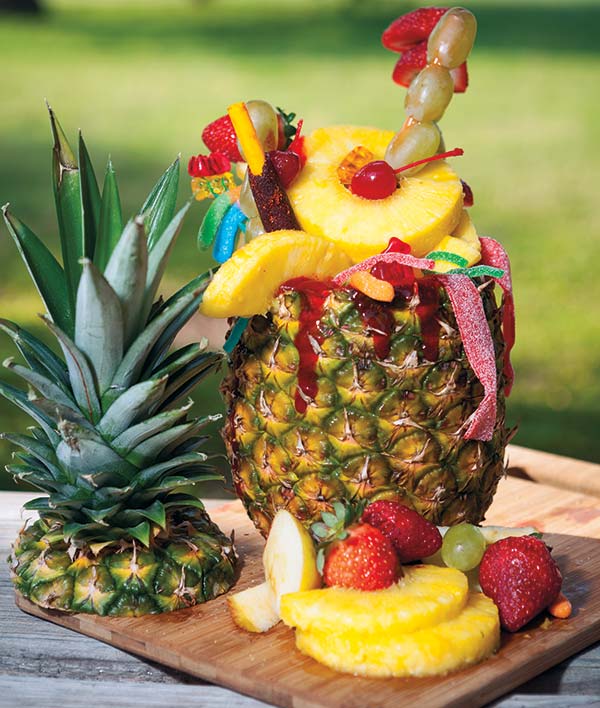 Over lunch with some new friends from Laredo last spring, I learned of an event in the Gateway City that piqued my interest—the annual International Sister Cities Festival, which brings nearly 200 Mexican artisans to Laredo to sell their wares and show off their traditions. “It’s a big shopping party and my favorite event of the year,” one friend confided.

A piña preparada is adaptable to whatever fruits, candies, and beverages you have on hand. Cut the top off the pineapple and use a knife or coring device to remove the fruit. Chop it up, leaving some in rings. Add pineapple chunks, cherries, apple slices, peach slices, grapes, and strawberries to the pineapple. Decorate with gummy-bear candies, sour strips, pineapple rings, and anything else that strikes your fancy. Drizzle chamoy sauce (a condiment made of fruit, sugar, salt, and chile) on the fruit. Add a tamarind straw (available at Alamo Candy in San Antonio) and the beverage of your choice.

There was a time when I made frequent trips to Laredo to shop at the city’s import stores, explore the markets and restaurants across the Rio Grande in Mexico, and people-watch in the plaza fronting Laredo’s historic La Posada Hotel. When dinnertime came around, I’d load up on $2 tacos at places like Taco Palenque, a fast-casual Laredo-based Tex-Mex chain that has one of my all-time-favorite condiment bars—complete with not only multiple kinds of salsas but also roasted serrano chiles, pickled red onions, and fresh cucumbers and radishes.

But I hadn’t been to Webb County in awhile. And since I had a blank spot in my calendar for the festival’s 12th anniversary last July, I booked a room at a hotel near the festival site and made the 3 1/2-hour drive south from Austin with a shopping list as long as a South Texas horizon.

“Where should I go to eat?” I had asked a Laredo friend by email beforehand. “Is there anything I should try that you consider a Laredo specialty?” I mentioned that I’d recently become a fan of New Orleans-style shaved ice, and could she recommend a spot for a snow cone or raspa, the snow cone’s Tex-Mex cousin?

I can imagine the mischievous glint in her eyes as she wrote back: “Yes, there’s this really refreshing raspa at Tropical Sno called the chupacabra. It’s a strawberry-flavored raspa with chopped pickle bits and chili powder—so yummy! But have you tried a piña preparada? Laredo has some drive-through stores where you can find them. They are actual pineapples that have been hollowed out and filled with fruit, gummy bears, a rainbow sour-candy strip, and chamoy sauce. And they come with a flavored Smirnoff cooler of your choice.”

That sounded outrageous and yet delicious. Little did I know that it would be but one of several outstanding edibles I’d encounter in this border city.

Crowds were already filing into the Laredo Energy Arena by the time I arrived to the Sister Cities Festival at 10 a.m., shopping bag in hand. As mariachi ensembles and folklórico dancers prepared for performances throughout the day, I wandered below colorful papel picado streamers among the booths, each one offering different arts and crafts from throughout Mexico, Laredo, and Spain. Oaxacan rug weavers Marina and Juan Gonzales had traveled more than 20 hours by bus to get here, while others—including Laredo-born Elsa Rodriguez Arguindegui, who oversees the La India spice
business her grandparents started in Laredo in 1924—represented homegrown successes.

But as candied pecans and coconut cookies do not a meal make, I joined a friend downtown for a late lunch followed by a celebrated piña preparada.

Founded in 1755 as part of a Spanish effort to thwart French settlement of the area, Laredo today is a major inland port and one of the fastest-growing cities in Texas. But its downtown historic district, anchored by the 1872 San Agustín Church; the 1916 La Posada Hotel; and the Republic of the Rio Grande Museum (the latter housed in an adobe residence constructed in 1830), is relatively small and definitely worth a few hours’ exploration on foot. Time it around lunchtime and stop in for a meal at El Mesón de San Agustín, a tiny, family-owned restaurant that offers a daily menu of home-style Tex-Mex dishes in a 150-year-old building. Tucked into a table by the cash register and a beverage case, I savored a plate of hearty albondigas en chile chipotle (meatballs in chipotle sauce) and tried to save room for that pineapple.

We had to drive around awhile to find one. These drive-through beer cuevas (caves), it seems, pop up and then move on, like food trucks do in Austin. We passed a place called Granolandia—“the best corn in town!” before pulling into a cueva clearly proud of its piña preparada prowess. While I marveled slack-jawed at the tower of fruit-flavored malt liquor bottles, my friend ordered two piñas preparadas and handed over $20.

The order seemed to take forever. As we sat in the car listening to the radio, I heard chopping, a can opener, the “pop” of a vacuum-sealed jar releasing. Then, as I tried desperately not to laugh, we were delivered two rather unwieldy football-size pineapples through the driver’s side window, along with an accompanying libation we’d open back at the hotel.

The pineapples, crowned with cherries and strawberries, with red rivulets of spicy-sweet chamoy syrup dusted with chile powder, appeared both breathtaking and lurid, like prom queens dressed as circus clowns. We took our first sip in the lobby of La Quinta, under the bemused eyes of the front-desk clerk and various hotel guests, one of whom took a photo. “Does insulin come with that?” someone joked.

Eat it and weep, skeptics. For while I’d never compare the complexity of a piña preparada with the well-composed meals I enjoyed at Laredo’s El Capataz, where I dined on redfish with a lemony purée of garbanzo beans; or at El Mesón, so authentic it could be in Mexico City; or at La India’s Tasting Room Café, where the mole is made from scratch, it’s my favorite memory of this particular trip to Laredo.

It’s the perfect mental souvenir, too: When I’ve made similar piñas for friends at home, amid giggles of disbelief and aborted attempts at sugar abstinence, this question always comes up: When are we going back to Laredo?

It’s been too long.