Austin’s Up & Down Tour offers Lessons in Coffee and Ale 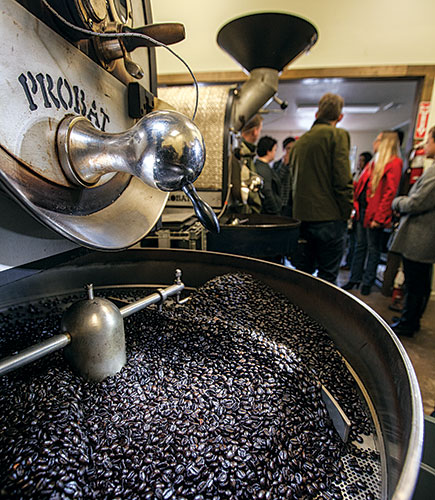 At 10 a.m. on a recent Saturday at Casa Brasil Coffees in Austin, I’m sitting at an L-shaped bar scattered with glass tumblers filled with different types of coffee beans. I’ve been issued a blank book for note-taking and a five-page review packet with a quiz on the final page, but the Brazilian music playing in the background mellows the scholarly mood.

This is phase one of an “Up & Down Tour”—the coffee part, complete with a smelling of beans, an elaborate tasting, and a review of coffee history, Brazilian labor laws, and United States public policy. The “Down” part of the program will be next, across the street at South Austin Brewing. The collaborative event—dreamed up by the two Austin start-ups in 2010—happens every second Saturday of the month.

While the goal is to transport us to Brazilian coffee fields and Belgian pubs, the whole thing is quintessentially Austin: a feast for the senses overlaid with an unmistakable seriousness of purpose. “We thought about doing a light, fluffy tour or a serious tour,” Joel Shuler, Casa Brasil’s founder, explained. “We opted for the latter.”

But the experience doesn’t feel like work. A former professional soccer play-er, Joel still has the focus and energy of a competitive athlete. He’s a coffee coach. At one point, he leads our small group past piles of burlap bags filled with raw coffee beans into the roasting room, where he lets us smell the beans at different stages of the roasting process. Over the noisy humming and cracking of the roasters, Joel shouts, “Try to lock these smells in so you can recognize them as we go back and start tasting!”

Coffee tasting is similar to wine tasting: We peer into the cup to evaluate the color, sniff deeply to appreciate the aroma, then finally taste the coffee to experience the flavor and texture. Then we report back with adjectives—a coffee’s “brightness” refers to its acidity, while “citric,” “zesty,” and “floral” are common flavor profiles of a lightly roasted cup.

During an earlier PowerPoint presentation, Joel had covered the three “waves” of coffee production in the United States, starting with the mass-market commercial brands that became popular after World War II. Now, he has us taste examples. Not surprisingly, a bitter “first wave” cup reminds me of mornings at my grandmother’s, and a darkly roasted and aromatic “second wave” cup takes me to the modern coffeehouse. (It’s much better, but I wouldn’t mind some cream and sugar.)

We conclude with a “third-wave” cup of Casa Brasil’s own single-estate Santa Inês coffee, a complex cup characterized by floral and earthy notes. I even detect a hint of lime. The route to market is different, as well—Santa Inês and other third-wave beans arrive in stores via sustainable relationships between the roasters and the farmers. Were it not for my caffeine jitters, I could have easily enjoyed a whole pot. Thankfully, it was time for the “Down” portion of the tour.

Across the parking lot at South Austin Brewing, we relax with a taste of Crossroads Coffee Stout—a dark ale brewed with Casa Brasil coffee. Then, after a catered lunch, brewmaster Jordan Weeks begins our lesson on the brewing, packaging, and serving of Belgian beers.

Our beer session is more casual than our coffee session, as befitting the beverage, but it’s no less detailed. First, Jordan pours malted barley and fresh hops into our hands and encourages us to crush and taste the mixture; we detect the fresh aroma of grass and fruit.

On a casual wander through the spacious, high-ceilinged brewery, Jordan leads us up narrow ladders to peer down into the stainless-steel brewing equipment. He explains aspects of the brewing process—malting, mashing, fermentation, and bottle conditioning—while pushing and pulling on various gauges to show us how the machinery works.

Once we’re back in our seats, it’s time for more beer. We taste SAB’s Golden Ale, a light, fruity, sippable beer and Saison, a darker brew with notes of black pepper and citrus. And then Jordan brings out a couple of brand-name beers and asks us to offer opinions on flavor, taste, and freshness. While it’s a treat to taste some of the top-shelf imports, nothing tastes quite as delicious as SAB’s house beers.

I’m buzzed on coffee and evened out by beer. And enlightened. Our tutors have made a convincing case for beverages that are roasted and brewed close to home.