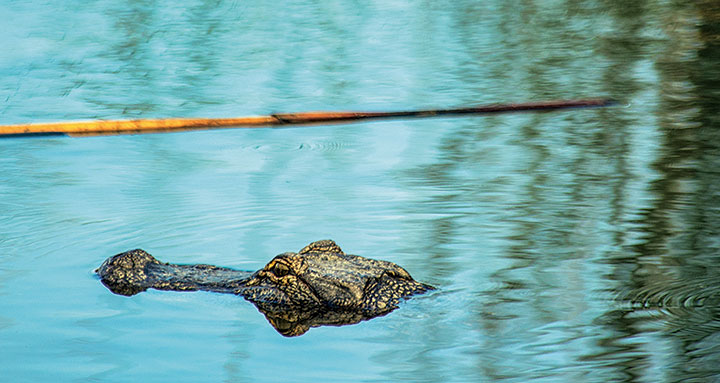 Watching an alligator glide through a murky bog, I’d have sworn I was in Louisiana. But no, this gator—one of a dozen I spotted during an hour’s tour—patrols the waters of Cattail Marsh in Beaumont.

A healthy dollop of swamp seasons this city of 118,000 on Interstate 10 just 30 minutes west of the Louisiana border, blending with a strong heritage of oil and diverse museums exploring sports, art, and even firefighting history. Whether you’re after an outdoors adventure, air-conditioned culture, or distinctive East Texas cuisine, you’ll find plenty in Beaumont to pack into a weekend.

Nature lovers should grab a camera and trek or bike into the 900-acre Cattail Marsh, part of the city’s Tyrrell Park and free to explore. “Grebe! Grebe! It’s a common grebe!” alerted our guide, George Newsome, who clearly embraces overseeing the marsh as part of his duties as the city’s water reclamation superintendent. He pointed out a bald eagle and nest of eaglets, along with red-winged blackbirds, northern shovelers, a roseate spoonbill, and the black mallards that dwell here year-round. It’s safe to photograph gators from the trail on levees above the marsh, Newsome said, “but I never turn my back to them.”

If you prefer your gators penned, head for Gator Country, home to hundreds of rescued alligators, including 80-year-old Big Al, who at 1,003 pounds and 13-feet long holds the title of largest gator in captivity in Texas. Gator Country gives visitors the chance to hold a baby alligator and, for an additional price, swim with a gator whose mouth has been safely taped shut.

More alligators inhabit East Texas’ dense, massive Big Thicket National Preserve. Beaumont rests at the edge of the 108,000-acre preserve, and a good way to explore its spooky bayous is with a Neches River Adventures cruise put on by the Big Thicket Association. Offered March through November, the two-hour pontoon-boat cruise starts at Riverfront Park near the railroad lift bridge and winds its way up the Neches and into the Thicket’s bayous, lined with moss-draped cypresses and leafy tupelos.

We saw no gators, but we enjoyed hearing Park Ranger Mary Kay Manning describe them as some of the few reptiles known to use tools to help catch prey. During nesting season, a gator will balance a twig on its snout and submerge under the water’s surface. A bird flies by to grab the stick for nesting material, and well, there you go.

Thousands of species inhabit the Big Thicket, including such carnivorous plants as the bright green, funnel-like pitcher plant; about a dozen species of bats, including the red bat, a rust-colored, camouflaged bat that dwells in the woods; and a cute microscopic critter called a moss pig—because under a microscope, it resembles a six-legged porker—which lives in the fuzzy green moss found on trees throughout the Thicket.

The Big Thicket’s status as a preserve means that timber harvesting is restricted, but oil and gas exploration remain. Oil has shaped the culture of Beaumont—and Texas—ever since black crude gushed from a little hill called Spindletop on January 10, 1901. Several Beaumont attractions tell the story of the energy industry, which still plays a big part in the city’s economy.

The Spindletop-Gladys City Boomtown Museum on the Lamar University campus replicates the boomtown village of Gladys City, where thousands of wildcatters and roughnecks arrived in the early 1900s. You can walk into many of the 15 buildings, including a saloon, a functional print shop, a barbershop, and a photo studio filled with vintage cameras, including a box-shaped 1887 Kodak #2 Flexo. Several times a month—check the museum website for a schedule—water shoots out the top of a replica oil derrick. Stand upwind to stay dry.

For a look at the lifestyle of one of the families that benefitted from the Spindletop oilfield, tour the McFaddin-Ward House, built in 1906. W.P.H. McFaddin was a successful cattleman with interests in real estate, including part of the Spindletop field. The home’s original furnishings and Beaux Arts-Colonial Revival style reflect the grandeur of turn-of-the-20th-Century wealth in Beaumont. Unusual touches include a massive fireplace in the entry hall and a third-floor “man cave” complete with pool and poker tables.

The third must-see oil-related attraction is the Texas Energy Museum, which portrays the history of the regional oil industry. Talking wildcatter mannequins share first-hand accounts, and interactive exhibits enliven the subject, including a video that re-creates the experience of motoring up the Neches River on an oil tanker. In another dark room, peek inside the refining process from the vantage point of an oil molecule.

Next door to the Texas Energy Museum, check out the Art Museum of Southeast Texas to explore regional artists. Exhibits rotate, but you may find the likes of David Bates, James Surls, and Robert Rauschenberg. Across the street, admire the marquee of the 1927 Jefferson Theatre—still a performance venue—where It’s a Wonderful Life premiered in Texas in 1946 and where a country music crooner named George Jones sang and ushered as a young man.

Nearby, the Fire Museum of Texas displays vintage fire trucks, including the one that reporter Walter Cronkite jumped on to race to the scene of the 1937 New London school explosion. The 24-foot, working fire hydrant out front hails from the 1999 re-release of the Disney animated movie 101 Dalmatians.

A few miles away, the Babe Didrikson Zaharias Museum showcases trophies, newspaper clippings, and even the harmonicas of the pioneering, multi-talented athlete who dominated women’s sports in the 1930s and ’40s. Born in Port Arthur and raised in Beaumont, Babe was best-known for her achievements in golf and track, including gold medals in javelin and the 80-meter hurdles in the 1932 Summer Olympics.

An eye-popping attraction that may surprise you is Saint Anthony Cathedral Basilica. Built in 1907 and designated a basilica in 2006 by Pope Benedict XVI, Saint Anthony’s welcomes guests to its ornate sanctuary to marvel at stained glass windows depicting saints and intricate mosaics portraying biblical virtues.

Along with gators and swamps, you’ll find a pinch of Louisiana influence in Beaumont’s food. At Willy Burger, the Booty Burger piles fried boudin upon a juicy burger made of freshly ground beef. Add a side of crunchy, peppery onion rings and devour the whole thing inside an Airstream trailer that’s attached to the little diner. Prefer a salad? Try Katharine & Company’s Pecan Parmesan Crusted Chicken Salad, packed with tomatoes, green beans, and new potatoes glazed with honey mustard. For an upscale dinner, The Grill serves specialties like juicy steaks, grilled oysters topped with Parmesan garlic butter, and an especially creamy, tart Key lime pie.

Don’t forget breakfast. Step inside Rao’s Bakery and breathe in the cinnamon. A Beaumont staple since 1941, when the cook for Magnolia Oil opened the kitchen, Rao’s still offers a vast array of freshly baked cinnamon rolls, fluffy muffins, and savory sausage pastries, to name just a few treats. Jake Tortorice Jr., who’s been presiding over the kitchen since 1998, adds his native Sicilian note to the menu with delicacies like Sicilian cheesecake, which is topped with a layer of sweetened sour cream.

And you haven’t been to Beaumont if you haven’t eaten the catfish. I found a deftly cooked whole catfish, fried with a crispy cornmeal coating, at Pine Tree Lodge. About 15 minutes southwest of town, Pine Tree looks for all the world like somebody’s cabin, except that it recently added a large outdoor deck from which you can throw fries to the fish and turtles and watch alligators lurk in Taylor Bay-ou. Where else but Southeast Texas?