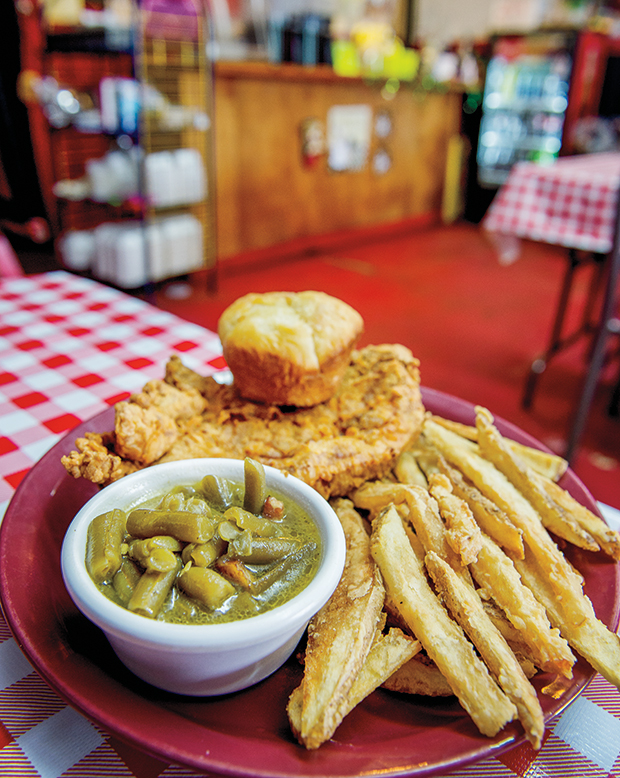 I knew the first time I pulled up to Sylvia Mae’s Soul Food in Jacksonville that there was more than meets the eye. Sylvia Mae’s, which occupies a ramshackle, metal-sided building with red trim and a lopsided front porch, isn’t fancy. But it’s not supposed to be: Owner Sylvia Jones envisioned it as a soul-food sanctuary, and one
visit will make you a believer.

Jones has been cooking since she was seven years old. “I just love cooking, and I love to feed people,” she says. Growing up in Rosebud, a small community about 25 miles east of Temple, Jones and her seven siblings all pitched in doing daily chores, and Jones found her skills in the kitchen. After leaving home at age 18, she followed a career path in the Texas food service industry that has spanned 50 years.

“Back in the day, in the late 1970s or early 1980s, when I worked at the Charcoal Inn in Temple, my boss asked me when I was going to open up my own restaurant, and what I would call it,” Jones says. “I spouted off ‘Sylvia Mae’s Soul Food,’ but I never really thought I would own a soul-food restaurant.” But a seed had been planted, and Jones was a quick learner. “My boss encouraged me to get my GED, and he taught me how to do business and how to put customers first,” she says.

Eventually, Jones moved to East Texas, and in November 2012 she opened her restaurant in Jacksonville. “I saw this place for rent in August, and each time I got paid I’d fix it up a little bit or buy something for it. By November I opened Sylvia Mae’s,” Jones says.

On a recent lunchtime visit, I brought friends along for the discovery. As we pulled into the red dirt parking lot, the neon “Open” sign welcomed us from the window. We opened the door to hear someone call out, “Y’all come on in.” Inside, photos of happy customers covered the walls, and diners huddled at red-and-white oilcloth-covered tables over heaping plates of hearty fare. Jones stood behind the counter, waiting to take our order. She is as friendly and hospitable as anyone I’ve ever met.

The menu features Southern staples like smothered pork chops, liver-and-onions, chicken-fried steak, fried ribs, fried catfish, and fried chicken, complete with tantalizing Southern sides—cornbread, fried okra, yams, mixed greens, purple hull peas, butter beans, macaroni and cheese, and mashed potatoes. Daily specials include gumbo, oxtail stew, meatloaf, and chicken and dumplings. After looking the menu over thoroughly, I ordered Sylvia’s chicken-fried steak with mashed potatoes and green beans ($9). This particular trio of comfort food is my all-time favorite, and my expectations surged when I inhaled the aromas coming from the kitchen. My friends ordered smothered pork chops ($9) and a “Soul Food” burger ($7), then Jones handed us glasses of ice and directed us to dispensers of sweet tea, Kool-Aid, and lemonade on the counter.

Jones disappeared into the tiny kitchen where she makes big magic happen. We could hear her singing and humming in the kitchen, and she confided later, “Singing eases my mind and helps me concentrate.”

While we waited for our meals, my friends and I looked at the range of photos on the walls, some signed with complimentary comments. “Sylvia, we love you and your soul food,” read one. When I asked Jones about it later, she smiled and said, “We have everyone from politicians to plumbers and mechanics. Plus police officers, teachers, coaches, firefighters, pastors, and hairdressers.

“I always like to visit with my customers and find out where they are from,” Jones continued. “A lot of folks find us as they are passing through, so I get to meet people from all over.” She told us a man from California stopped in recently and called his wife while he was eating. “His wife told him not to come home without hot water cornbread, so I made him some to go.” 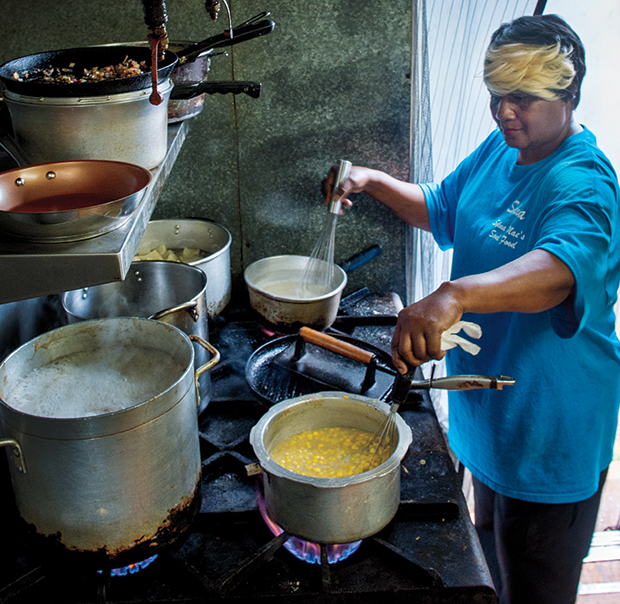 Sylvia Jones’ five decades in the food service industry pay off with both delicious food and warm hopsitality.

Jones soon emerged from the kitchen with our order. My plate was covered with cube steak dredged in flour then pan-fried, perfectly positioned next to mashed potatoes blanketed in white gravy beside a helping of green beans cooked with ham hocks and onions. My friend’s smothered pork chops looked delicious, too, and the Soul Food burger, a tower of beef, sausage, egg, cheese, and all the trimmings awaited my other friend. We had our work cut out for us, so we dug in.

A few minutes later we heard Jones call out to us, “How is everything?” Our mouths were full but we all gave her the universal nod of approval. Jones advised us to save room for banana pudding or peach cobbler, but we all knew it was too late. We would need to return another time for dessert.

After we paid our checks, Jones asked if she could take our photo to put on Facebook. We gathered, smiled, and went on our way. A few days later, as I was scrolling through Facebook, I saw my friends and me smiling from ear-to-ear, and I knew we’d been added to the wall of happy customers.