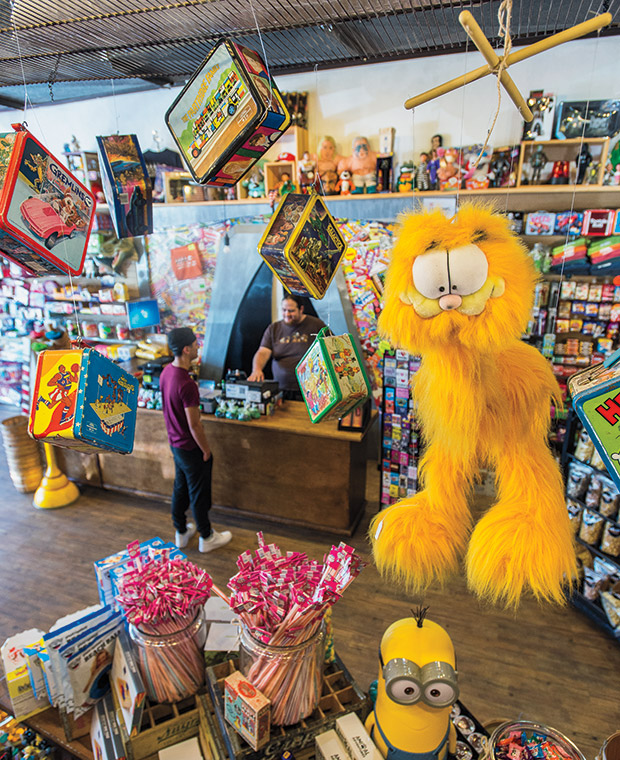 Some meat-lovers claim that bacon pairs well with almost every other food. I consider this point of view as I pop tiny bits of a confection called “Sizzling Bacon Candy” in my mouth. This candy’s “sizzle” involves bursts of bacon-tinged carbon dioxide, which tickle my tongue with the taste of fizzy smoked meat. “Sizzling Bacon Candy” is only one of the many curious bacon items available at Blooms Candy & Soda Pop Shop in Carrollton. The shop also stocks bacon cotton candy, bacon lip balm, and bacon air freshener.

The candy shop, located in a century-old building on Carrollton’s newly revitalized historic downtown square, brims with candy and soda covering the spectrum from nostalgic (Chiclets and bubble gum cigars) to gourmet (Violet Crumble), along with an assortment of novelty gifts like temporary tattoos and bobble-head dolls. An oversize mobile made of vintage lunch boxes hangs above a display of glass jars and boxes brimming with vintage candies like sugar-filled straws, Turkish Taffy, and Sugar Babies.

I’m surprised to find a couple of varieties by Atkinson’s Candy (headquartered in my hometown of Lufkin) that I hadn’t heard of before—Slo Poke and Black Cow caramel bars. Nearby, a towering stand filled with rainbow-colored lollipops adds more whimsy to the space.

Sugar-induced nostalgia runs rampant here. I overhear excited adults exclaiming to their shopping companions, “Do you remember these?” as they spot Nik-L-Nip wax bottle candies and packets of Big League Chew bubble gum. Plenty of items make me smile wistfully as well. Bins of saltwater taffy (75 flavors!) bring to mind family trips to the beach. A packet of lemon drops—those delicious, sugarcoated hard candies—reminds me of when my mom would dole them out to soothe a sore throat. And a SPAM lunchbox brings a chuckle as I remember my dad’s attempts at home-cooked meals.

These nostalgic treats, combined with modern delicacies such as organic hard candies and peanut-free, chocolate-covered sunbutter cups, comprise the shop’s inventory of more than 800 different types of candy and 250 sodas from throughout the world, including more than 50 varieties of root beer alone.

The shop’s name harkens to its initial foray as a flower shop. In 2008, co-owner Nicole Meadows and her partners—her husband John and friend Sid Iraheta—purchased the flower shop, and since it had two entrances, decided to add a candy shop. By fall of 2010, the candy business had weeded out the flowers altogether.

The shop’s website categorizes candy by decade, with extensive descriptions of each. It even lists “retired” candies such as Bit-O-Licorice and Gatorade Gum, noting if there is a projected date for any of those candies to return to the market. From this rich treasure trove of candy trivia, I learn that several varieties of common candy, including the popular Tootsie Roll, Bit-O-Honey, and Dubble Bubble gum—originated before 1930. In fact, Tootsie Rolls are one of the oldest currently available commercial candies, dating to the early 1900s and still produced to the tune of 64 million per day.

Meadows explains why some vintage candies disappear for a while before being reintroduced years later. “Just like the rest of the food industry, big companies buy out smaller ones, and items fade away when they are not profitable,” she says. But sometimes, a new company comes along, buys the rights, and reintroduces the candy.

Meadows enjoys the hunt. “I love weird fun stuff,” she says. “Before I got into this, I was a really good gift buyer, and this translated into the store. I want fun, goofy, oddball stuff that’s unique and quirky and makes you laugh.”

After browsing the madcap gift items, my kids and I select a six-pack of assorted sodas and head across the street to a picturesque park on the downtown square alongside two burbling fountains. We taste an orange cream soda with a smooth, citrusy flavor and a caramel apple soda that delivers a sweet flavor of fall. From the dozens of root beers, we try a bottle of Bundaberg Root Beer from Australia, which delivers an authentic taste of sarsaparilla. More international flavor comes from England’s Curiosity Cola, which sets its taste apart from other colas through the addition of ginger and herbal extracts.

Meadows tells us that Faygo Rock & Rye is her favorite soda in the shop, especially as it hails from her hometown of Detroit. She says that candy and soda have an intensely regional following, and she labels many of the sodas with their place of origin. “When people come in and they gravitate to a certain brand, I can almost always tell where they’re from,” she says.

We experience this phenomenon ourselves while browsing the soda selections. I hear a teen yell to his mom, “Mom! Look! They have Cheerwine!” The boy’s enthusiasm piques my interest, and so I ask his mom about the beverage. She explains that Cheerwine, an extra-carbonated cherry cola, hails from their home state of North Carolina, where it enjoys a cult following.

Some of the soda varieties earn their merit for novelty rather than taste, and while they may be ill-advised, they are difficult to resist. My son Caleb selects a bacon-flavored soda, but after tasting it, declares, “I would rather taste baking soda than bacon soda.” Meadows laughs and confides, “That soda tastes horrible, but we sell a ton of it—almost always on a dare.”

Whether you’re inclined to try an outlandish treat or stick to tried-and-true candies that have delighted sweets-seekers for decades, it’s hard to resist the wacky wonderment of Blooms. And if you’re worried about all that sugar’s impact on your teeth, you could always pick up some of their bacon-flavored toothpaste.