Eat in. Take out. 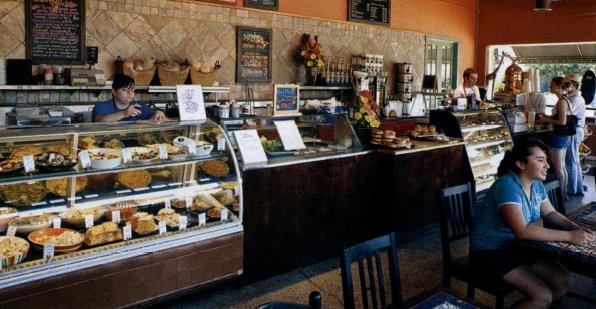 Before Dallas’ North Central Expressway bisected the city in 1950, Greenville Avenue—now flanked with homes and businesses—served as the primary auto route from the northern reaches into downtown. The street continues to draw traffic, though now—especially in the trendy stretches of Lower Greenville Avenue—visitors are as likely to travel by foot as by car. Long known for its bars, music venues, and restaurants, the area now boasts a vibrant daytime complement to its after-dark appeal.

Neighborhood resident Chuck Cole can take some of the credit for this transformation. In 2004, Cole recognized the charm of the 1920 Belmont Pharmacy Building, and began restoring the structure’s transit glass, black-and-white terrazzo floors, and original pressed-tin ceiling. In 2006, he opened his unusual venture: a combination florist/deli shop called The Corner Market. “We had lots of nightlife and dinner-type places, but not a deli,” says Cole. “Not a place where people could get a sandwich or a muffin and read the paper.”

One half of the shop handles the floral side of the business, while the other half serves a varied clientele who stop by for pastrami paninis and Mediterranean salads, breakfast burritos and fruit tarts, Italian sodas and espressos, and any of dozens of freshly prepared takeout specials in the chef’s case.

And, with trendy clothing resaler Buffalo Exchange on one side and the restored Granada Theater—now a popular music venue—a few minutes’ walk down the street, The Corner Market’s patio might offer the best people-watching north of Deep Ellum. Call 214/826-8282.