The Joy of French Cooking 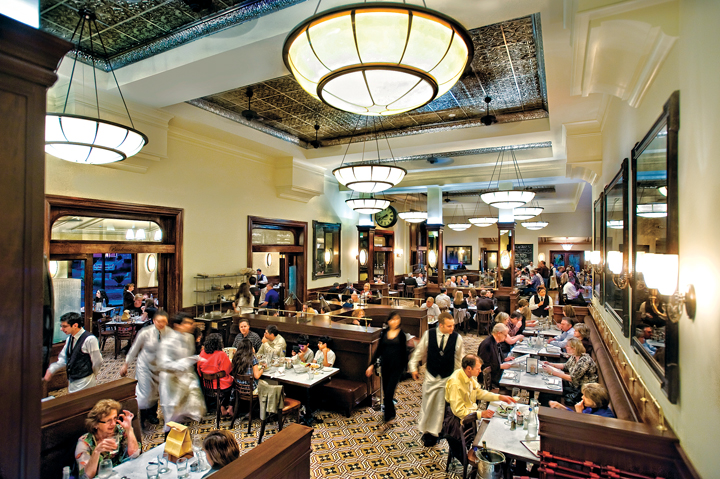 I’m fascinated by how dining trends have shaped what I know about geography, history, language, and other foundations of culture. It’s the unexpected joy of discovering history through the portal of cooking. Lately, I’ve been curious about the many brasseries and bistros opening up across Texas, and the bonus is that I’m learning about the 18th-Century collapse of the French monarchy, the literary culture of Paris, and the French-Cajun-Creole melting pot of Louisiana.

In French, brasserie means “brewery.” The conventional wisdom suggests that these informal eateries—characterized by such dishes as garlicky steamed mussels and steak frites, plus plenty of beer and wine—first appeared during the French Revolution, when chefs who no longer worked for ousted nobility took their culinary talents to the common man. In Texas, the brasserie and its close cousin, the bistro, take many forms, from gleaming concept restaurants to cozy hangouts where flirtatious servers and a long wait are part of the appeal.

My first stop, Brasserie Pavil in San Antonio, opened in late 2008 along the rapidly developing corridor of Loop 1604, northwest of downtown. Pavil’s Corporate Executive Chef Scott Cohen, who trained at the Moulin de Mougins hotel in the south of France before making a career with the Watermark Hotel Company in San Antonio, oversees a restaurant that resembles a spacious version of the famous Brasserie Lipp—that favorite Parisian hangout of Marcel Proust and André Gide. Cohen did his research on both surroundings and menu: Geometric floor tiles, antiqued mirrors on the walls, pressed-tin ceiling panels, and a 40-foot-long zinc-and-mahogany bar are classic brasserie decor elements. As per tradition, an outsized clock—several feet in diameter—is visible from most tables; legend has it that French dockworkers in the 1800s relied on these brasserie timekeepers to get them back to work on time.

Of the dishes I sampled, which included a seared tuna appetizer with tangy hollandaise; an array of raw oysters served with mignonette sauce; and a beet-and-calamari salad, mellowed with toasted almonds and crisp haricots verts, I most enjoyed the lush French onion soup, that brasserie classic. Pavil’s sous chef, José Yanez, may tinker with traditions elsewhere on the menu, but he sticks with the basics here, caramelizing the onions in butter for several hours before adding rich beef stock, then topping individual bowls with slices of hearty bread and nutty Gruyère before sending them off to the broiler.

Still, Yanez tells me that his favorite dish at Pavil is the halibut ”We sear the fish on one side,” he says, “then we add a tomato-clam broth, shaved garlic, and crushed pepper, and serve it with a sauteed lemon-herb risotto cake and a lightly wilted arugula salad.”

For a 180-degree change of attitude, I visited the popular Justine’s Brasserie in Austin. For months after its opening in late 2009, stories of long weekend waits kept me away (as per true brasseries, Justine’s rarely takes reservations but serves dinner until the wee hours). On a recent Wednesday night, though, I finally discovered the reason for the buzz. While patrons played petanque (a bowling game similar to horseshoes) on the crushed-gravel lawn, my dining companion and I sat at a cozy wooden table inside the restaurant’s converted 1937 bungalow, sipping wine and enjoying the people-watching while we lingered over our meal. I savored the plump grilled scallops, their sweetness balanced with slices of salty, meaty lardons; my tablemate, who had been craving a burger, found an exceptional example in Justine’s Royale with Cheese, a house-ground patty topped with Gruyère and served with crunchy pommes frites.

Even in a restaurant with roots in tradition, Texas chefs like to mix it up—especially if they have ties to the French-inspired Cajun and Creole cuisines of Louisiana. To learn what those variations were about, I paid a lunchtime visit to Bistro Alex, which occupies a cozy, clubby spot in Houston’s new Hotel Sorella at CityCentre, a 15-minute drive west of downtown.

The brainchild of Alex Brennan-Martin, whose family originated New Orleans’ famous Commander’s Palace, Bistro Alex benefits from novel and delicious cuisine as well as inspired decor. Sage-colored walls and slabs of antique mesquite lend a warm ambience in which to enjoy Chef Juan Carlos Gonzalez’ interpretations of French Creole cuisine … with a twist. “New Orleans cuisine, like the cooking in my native Puerto Rico, emphasizes what I call ‘soul food’ elements,” says Gonzalez. “We do a crispy fried snapper—a popular New Orleans dish—and serve it with a sauté of Texas citrus and vegetables. But then for a Latin twist, I’ll drizzle chimichurri sauce on top.”

As the restaurant filled with businesspeople from the nearby Energy Corridor, I shared a bowl of the Brennan family’s famous turtle soup, aromatic with sherry and thyme; as well as a satisfying andouille sausage flatbread, accented with grilled green onions and mustard greens. “We call what we do here ‘Texas Creole,’” says Brennan Martin. “I think of Houston as where Louisiana and the Southwest come together. Ultimately, at any restaurant, we-as human beings-want to share a bit of conviviality in the breaking of our daily bread!”

For dessert, my companion and I shared a classic French crème brûlée. As we chatted and savored the contrast of crunchy praline crust and creamy custard, I thought about how chefs—like artists in other genres—continually borrow from each other, follow and reject trends, and sometimes expand the worldviews of the public. Bon appétit.