Dining in the Big Bend Region 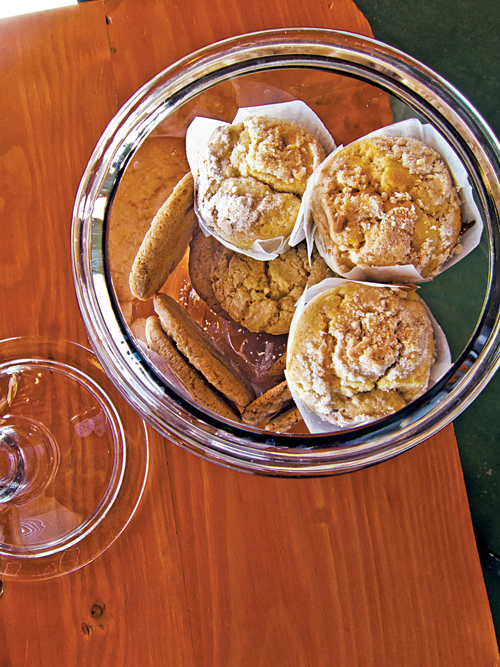 Pastries at Plaine, Alpine’s hottest coffee shop. Dining in the Chihuahuan Desert has never been so delicious or varied. (Photos by J. Griffis Smith)

Whereas restaurant and café openings a few years ago in Texas’ Big Bend region were of the surprisingly sophisticated sort, today’s newer arrivals represent a cornucopia of options ranging from hip and trendy to simple and satisfying. Luckily, as I learned while grazing the region with Marshall, my favorite fellow road warrior, we could keep to a budget on the trip, too: Many of today’s new eating spots won’t put a dent on the wallet.

Of course, our longtime favorites are still producing memorable plates: We’re still high on Maiya’s, the Marfa mainstay whose Italian sausage with roasted fennel and red grapes tantalizes; Pizza Foundation, Marfa’s destination for pesto pie with juicy tomatoes; the Food Shark in Marfa, where Krista Bork’s falafels are matchless; La Kiva, whose smoked chicken and ribs (with a side of karaoke) are worth the drive to Terlingua; and Alpine’s Bread & Breakfast, where a fully loaded breakfast burrito keeps us satisfied until supper.

We began our recent tour of Big Bend palate-pleasers in Alpine. Wheeling into town after an arduous drive from Fort Worth, we hungered for something substantial but quick and low-key for lunch. Eager to try the food at Cow Dog, a new food truck I’d heard about, we headed to Holland Avenue, where we found our quarry parked in its new spot alongside a popular coffee hangout called Plaine.

At Cow Dog, local foodie and multimedia artist Alan Vannoy mans the window and stove himself, taking orders and turning out a wonderfully wicked assortment of griddle-seared, gourmet hot dogs. Alan soon handed us paper plates piled high with a lunch we’re still talking about months later. Mine, the “Artisan” dog, sat beneath a smear of apple-apricot chutney and melted Tillamook sharp cheddar atop a bun spread with white-wine mustard. Marshall sighed happily over his “German,” which was adorned with sauerkraut, a slice of bacon, a sprinkling of caraway seeds, and a hint of spicy mustard.

After devouring these at handmade metal-and-concrete tables on the front patio at Plaine, we stepped up to the coffee bar for a dessert of chai latte and jumbo-size, lemon-vanilla cupcakes. Owners Daniel and Jessie Browning, who also run a java joint in nearby Marfa called Frama, brought Plaine to Alpine in 2011 and moved to this location this past fall. As the menu does at Frama, Plaine’s menu features Scrabble letters, as Daniel is fond of the game. (“Plaine” and “Frama” are jumbled spellings of Alpine and Marfa.) 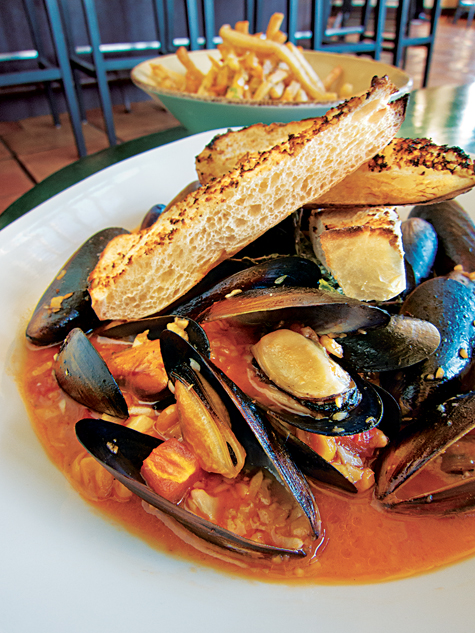 The classic combination of mussels and fries shines at the Holland Hotel’s new Century Bar & Grill.

After checking into the beautifully remodeled 1928 Holland Hotel, just down the street, we made dinner reservations at the hotel’s new Century Bar & Grill. The long bar in the restaurant’s front room overlooks the busy sidewalk via an expanse of windows, and the whole place hums with warm energy. Vintage Western paintings and an iron chandelier boasting antique electrical insulators add to the eclectic ambiance.

Seated in a booth facing the open kitchen, we enjoyed an appetizer of grilled quail in sour cherry sauce before digging into a salad adorned with pepitas, crumbled goat cheese, and Texas ruby-red grapefruit sections. Then came chef Alex Acosta’s pièce de résistance, his version of chicken-fried steak, a tenderized, battered, and fried sirloin steak dressed in a chorizo gravy studded with corn kernels and jalapeño bits. This delighted us both, even as much as the seared beef tenderloin, which was served atop a bed of creamy cabbage and topped with grilled asparagus.

With such richness under our belts, we decided that next evening’s meal should be downscale and simple. We found exactly that on the menu at Los Jalapeños, a new Alpine café opened last year by chef Vidal Garcia, a native of Chihuahua. Marshall put out the mild fire from his stacked green-chile enchiladas with a glass of fresh lemonade, while I savored each bite of pork posole, punctuated by bits of avocado and radish.

Zipping 25 miles over to Marfa another day, we browsed art galleries and added to our library with finds in the Marfa Book Company before checking out yet another new food truck, Fat Lyle’s. Currently found across US 67 from the Airstream trailers and campsites at El Cosmico and near the Marfa art Mecca that is the Chinati Foundation, Fat Lyle’s brings another much-needed lunchtime option to town.
My vegetarian-friendly order of curry fries found a stack of thick-sliced French fries topped with squash, zucchini, and carrots sautéed in a mild, sweet curry sauce. Marshall struck gold with his banh mi, a Vietnamese-style sandwich starring slow-cooked pork mixed with tangy pickled cucumber, red onion slices, carrot shreds, and cilantro on a toasted French baguette.

Another evening in Marfa, we made a 10 p.m. stop into the Late-Night Grilled Cheese Parlor. The creation of artist-musician Adam Bork, who’s garnered national acclaim for the Food Shark truck he runs with his wife, Krista, the sandwich café—decorated with Adam’s multimedia presentations on recycled television and computer screens—operates late-night on Friday and Saturday, when food options are scarce. At our arrival, we found no fewer than 25 people waiting on hot sandwich orders.

Adam’s creations change nightly. The classic sandwich might include cheddar, tomato, jalapeño, and bacon, while other versions might feature Gruyère, mozzarella, and Monterey jack cheeses, to which you can add caramelized onion, fire-roasted corn, and roasted red bell peppers. 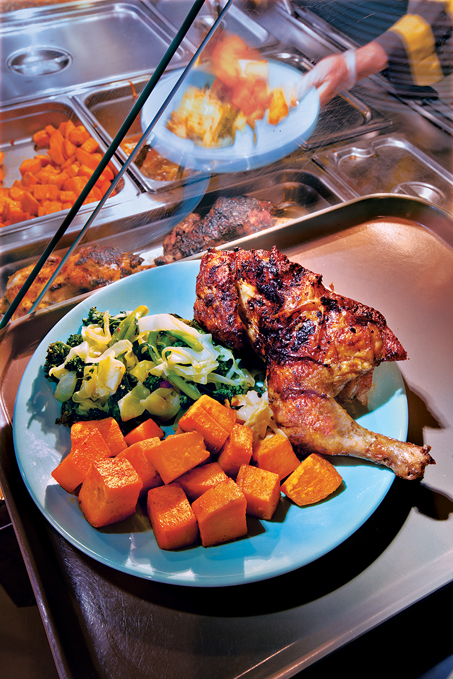 And finally, some of our favorite Big Bend dining experiences recently have been those in Marathon, less than an hour’s drive east of Alpine. On our last Marathon adventure, we slept a dreamy night at Eve’s Garden Bed & Breakfast and awoke to one of innkeeper Kate Thayer’s renowned breakfasts. Her newest sensation awaited on a vintage blue Fiesta plate: Fluffy lemon-ricotta pancakes took on a scattering of blueberries, as did her Greek yogurt flavored with vanilla and honey. Even the Austin preteens we met at the community breakfast table decided this breakfast warranted high praise.

Fancy and fussy? Not at all. And that’s why we find such satisfaction in dining our way through the Trans-Pecos.