Make room at the table for over-the-top 'haute dogs' 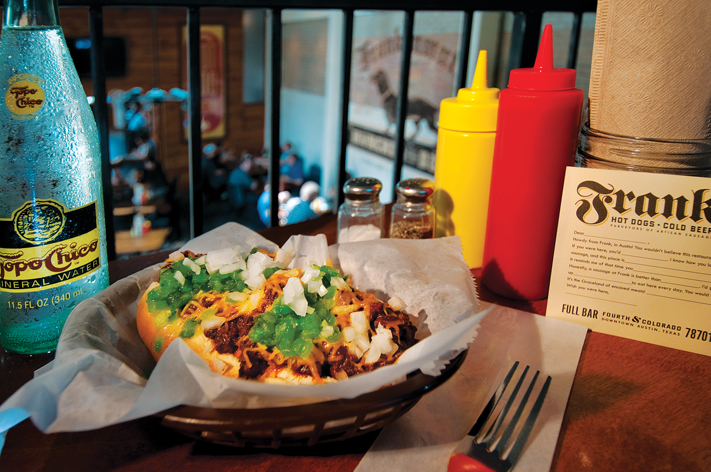 Not all chili dogs are created equal. At Frank in downtown Austin, the tangy Chili-Cheese Dog is made with 100 percent Vienna beef. (Photo by Stan Williams)

Amidst a sea of food blogs and newspaper stories, I recently came across an article about a popular New York restaurant called Serendipity 3, which is turning heads with a new high-dollar menu item: a $69 hot dog. Yes, hot dog. Or rather, “haute dog.” This three-foot-long, all-beef frank is dipped in truffle oil before it’s grilled, then nestled in a fresh pretzel bun and topped with foie gras and a sprinkle of black truffles.

I couldn’t help but chuckle. It was only a matter of time, I thought, before the “foodie” culture spruced up the lowly hot dog with a little glitz and glam. Growing up, I relished hot dogs at family cookouts and carnivals. But these days, the hot dog can go well beyond the minimally adorned franks you’ve probably enjoyed at the ballpark. Restaurant chains and chef-driven kitchens alike are raising the bar on this American classic.

You don’t have to go to New York to enjoy a “haute dog.” In fact, Max’s Wine Dive, a popular wine bar and restaurant with locations in Houston, Austin, and San Antonio, has a “haute dog” of its own. (Unlike the $69 New York bad boy, Max’s runs a mere $14.) Amid menu items like spicy fried chicken and mushroom-studded meatloaf, you’ll find a beefy behemoth dubbed the Texas Haute Dog. Made with grass-fed Black Angus beef, hearty chili, house-pickled jalapeños, cotija cheese, and diced onions, and served in an artisan bun, it arrives at your table accompanied by a mountain of piping hot French fries and onion rings.

But fancy hot dogs don’t appeal to everyone, especially those who like to stick with the classics. Of course, depending on where you live, a “classic”
hot dog can mean many things: In Chicago, it means a Kosher beef frankfurter with sweet pickle relish, hot peppers, tomato wedges, and celery salt; in New York, “classic” means yellow mustard and sauerkraut; in the deep South, “slaw dogs” rule. In Texas, the classic dog is characterized by chili, cheddar, and onions. After all, chili is the official Texas State Dish, and what better way to enjoy it than on a hot dog?

Chili dogs are the number one draw at Houston’s famed James Coney Island. Recently voted one of the “Top 5 Drive-Ins” in the country by the Food Network, this fast-casual Space City icon has been serving up traditional chili dogs since 1923. Founded by brothers Tom and James Papadakis, who emigrated from Greece in the early 1920s, “JCI” was inspired by New York street vendors along the popular Coney Island Boardwalk. In 1923, the Papadakis brothers opened the first James Coney Island in downtown Houston; now there are more than 20 locations in and around the city. (The brothers flipped a coin to see whose name would adorn the restaurant. You can guess who won the toss.)

“I used to come here as a kid with my dad,” says Darrin Straughan, who took over the restaurant chain in 1994. “My business partners and I are all
Houstonians, and we try really hard to maintain the reputation the Papadakis brothers started.”

Straughan has expanded the JCI menu with such regional favorites as a Chicago-style dog, a New York-style dog, and even a Polish sausage. It’s something a number of hot dog-happy restaurants have done around the state. In Dallas, Wild About Harry’s may be known for its tasty frozen custard, but it also draws a crowd for its selection of regional hot dogs, as does Austin’s Dog Almighty. But Austin’s Frank carries the trend to new extremes.

In fact, Frank, which opened in 2009 in Austin’s downtown Warehouse District, has introduced a number of creative variations to entice epicurean and traditional palates alike. From the “Jackalope,” an antelope, rabbit, and pork sausage served with huckleberry compote and spicy sriracha, to the “pizza dog,” stuffed with pepperoni, marinara, and mozzarella cheese, to specialty dishes  starring kangaroo or alligator sausages, Frank hits the hot dog concept out of the park.

“You can come in here and get a basic, cheap chili dog with a beer,” says owner Daniel Northcutt, “or be a ‘foodie’ and try a wild boar dog with a glass of wine.”

Although Northcutt wanted to celebrate the almighty hot dog at Frank, he also wanted to make sure everyone could find a place here—hence the veggie dogs and gluten-free bun option.

“Lawyers come in, throw their ties over their shoulders, and tear up chili dogs. Grandma and Grandpa come in for Chicago dogs and bratwursts; and then we’ve got hipsters, musicians, and construction workers all coming in here and finding something they really like,” he says.

With a new restaurant concept in the works for Houston, Max’s Jerry Lasco aims to please as many hot dog aficionados as possible. His new, yetunnamed project will pair wines with a variety of specialty hot dogs, but he also plans a gourmet “toppings bar” so that customers can build the perfect hot dog with everything from Asian kimchee to house-made sauerkraut. Lasco sets out to prove that the all-American hot dog brings people from all walks of life together.

“Wherever you go, people eat hot dogs—on the 4th of July, and at ball games, carnivals, and other places where families are getting together,” says Jam es Coney Island’s Darrin Straughan. “Hot dogs should be there whenever anyone’s having a good time.”

I may not reach for a foie gras hot dog anytime soon, but seeing how a wide variety of dining establishments are heralding this old-fashioned classic, I am revisiting my childhood love of the hot dog. Chili, mustard, and cheese, please—but hold the onions.