Where the Chefs Eat 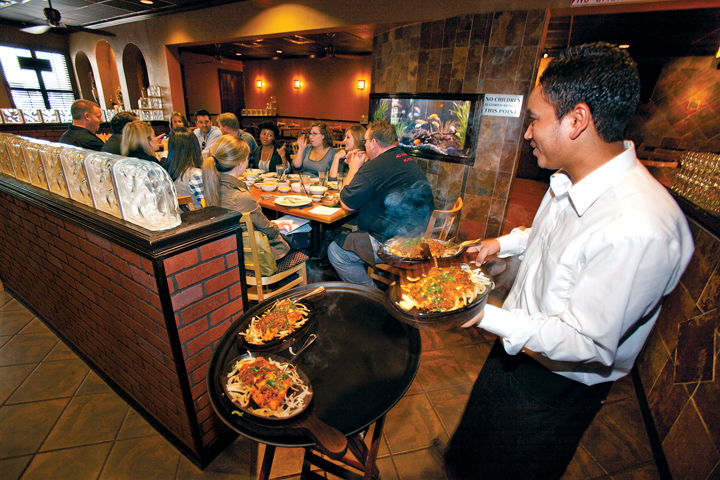 Ever since I discovered the culinary adventures to be found on Houston’s Bellaire Boulevard, Long Point Road, and other Houston streets where the city’s international influences collide, I’ve made it a point to seek out the city’s small, independent, ethnic  restaurants. Thanks to Houston’s diverse population, it’s easy to explore more than 40 world cuisines without leaving the city limits. But how do you know you’re finding the best places?

You could follow the lead of some of Houston’s most celebrated chefs—players on the national culinary stage who find inspiration from the mom-and-pop eateries of their Gulf Coast melting pot. To learn more about where they go on their days off, I joined a recent pilot tour to inaugurate the new “Where the Chefs Eat” culinary tours program. Led by seven nationally known Houston chefs and one award-winning food writer, our two-day exploration shined a spotlight on the city’s multicultural food scene.

Each chef has a different area of interest and expertise, so the tours differ in content and style. For example, on his “Houston BBQ Trail Tour,” longtime food critic Robb Walsh, whose Tex-Mex Grill and Backyard Barbacoa Cookbook came out in May, introduced us to the many versions of smoked meat in Texas, all differentiated by spices, wood, sauce, and time spent on (or in) the pit. First up, we visited a food trailer parked outside a discount grocery in the 5th Ward, where barbecue maestro Gregory Carter served us classic examples of African-American brisket and sausage. Sopped in sauce and smoked over red oak, both meats provided a dramatic counterpart to the delicately spiced German sausages we sampled later from Guy’s Meat Market.

Next, we traveled west to Pierson’s to collectively swoon over mesquite-smoked pork ribs and buttery bread pudding. By the time we got to the peppery spareribs at Pizzitola’s, which has been serving barbecue since 1935, Walsh had passed along some of his encyclopedic knowledge of the history and tradition of barbecue—and how it parallels the history and culture of Texas.

Later, we paid a visit to El Hidalguense, an unassuming restaurant on Long Point Road, made especially festive thanks to tequila shots and a mariachi band. Cabrito roasted in a pit inside the open kitchen, and we sampled the tender goat along with other delicacies from the Mexican state of Hidalgo, including a smoky chicken mole, savory pork loin with cactus strips, and a fiery, dark salsa made with a Central Mexican chile called chile rayado.

The tours, with themes such as “Southern Comfort,” “Taste of Asia,” “Grocery Stores and Ethnic Markets,” and “China-town,” usually involve two chefs, who pair up to present their favorites.

“We decided we wanted to highlight what the city has to offer food-wise, and to showcase our diverse ethnic community,” says Chris Shepherd, the chef at Catalan, a Washington Avenue restaurant that presents an eclectic, locally-based menu. “I think a lot of people are afraid to get out of their comfort zones. When they do, though, it becomes more than just going out to eat; it becomes an education into another culture.”

“As chefs, we didn’t want to focus on our restaurants, as we figured that people would find us anyway,” says Chef Monica Pope, whose dishes at T’afia and Beaver’s rely on seasonal produce. “So we thought we’d share a side of Houston that we know and love.” For her “Taste of Asia” tour, Pope teams with Bryan Caswell, executive chef at the restaurant Reef, to explore Persian grills, French-Vietnamese sandwich spots, and Indian vegetarian restaurants.

And sometimes the chefs veer away from restaurants entirely—Pope and Chef Marcus Davis host a tour called “Momma’s House,” during which they visit their actual mothers’ houses for authentic home cooking. “My favorite place to eat is in my mom’s kitchen,” says Davis. “So we’re all going to eat the comfort food I ate on Sunday mornings, growing up.”

My group didn’t get to visit Monica Pope’s or Marcus Davis’ moms’ houses. But we did visit a diverse collection of restaurants across the city. At Vieng Thai, we dined on coconut-milk soup, fragrant with lemongrass, scallions, and ginger; refreshing green-papaya salad, pungent with fish sauce; beef in green curry; and curried chicken with potatoes and peanuts. At Himalaya, an Indian-Pakistani restaurant west of Loop 610, we sampled brilliantly spiced lamb biryani, chicken tikka masala and hara masala, and amazing naan—golden, bubbly, and yeasty, yet still light in texture and flavor. Nearby,
at the London Sizzler, a British-style Indian restaurant, we savored tandoori chicken, a complex fish masala, and a spicy, Indian version of fried okra, prepared with onion, coriander, cumin, and cilantro.

We even visited one of the chefs’ favorite supermarkets—a sprawling Asian market west of the city off I-10, where I purchased a bag of Thai red rice, a bag of wasabi peas (in case I ever felt hungry again), and a mystery bag from the vast fungus aisle that turned out to be an herb used to improve liver function.

Perhaps I was foolish to explore the fungus aisle blind. You don’t have to: On their “Grocery Stores and Ethnic Markets” tour, chefs Chris Shepherd and Randy Evans accompany groups to markets (Polish! Russian! Mediterranean! Southeast Asian!) across the city, where they’ll share their shopping secrets. “When we started serving spring rolls at Haven, I didn’t know what brand of wrapper was best,” says Evans. “So I asked one of the cooks at a place I used to frequent. She said, ‘Get the one with the two flying horses on the front.’ I’ve been using them ever since.”

“Embracing new cuisines,” observes Chef Hugo Ortega, who brings continental polish to his interior-Mexican dishes at Hugo’s, “is what enriches a community, generates energy, and distinguishes one group from another. On these tours, I believe I have this great opportunity to present my country’s culture to the world.”

And with these tours, you’ll see a side of Houston you might not know existed. I can’t wait for further exploration.