The Bee’s Knees Apis Restaurant and apiary in Spicewood 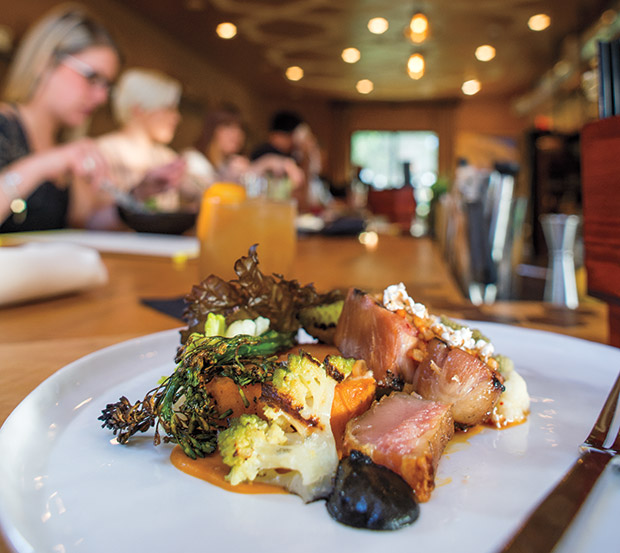 On six acres overlooking the Pedernales River in Spicewood, bees come and go from 20 hives scattered around a field of wildflowers and oak trees. The honey these bees produce goes into select dishes and cocktails at Apis Restaurant and Apiary, where fine dining and Hill Country ambiance blend seamlessly in a cozy limestone building surrounded by more wildflowers and oak trees.

Owners Taylor and Casie Hall see theirs as a dual mission—save the bees, serve hungry humans.

Taylor grew up in Bowie, and Casie hails from Louisiana. Shortly after they married, the couple headed west, where Taylor attended the California Culinary Academy of San Francisco and honed his skills at such top restaurants as Wolfgang Puck’s Postrio and the James Beard Award-winning Boulevard. The Halls always intended to return to Texas, though, and in 2007 started a boutique catering company in Spicewood. Around that time, Taylor read an article about colony collapse disorder, which had begun decimating honeybees across the United States.

By 2015, beekeepers were reporting average annual losses of 30 percent. A combination of pesticides, pathogens, loss of pollen and nectar sources, and climate change likely bears the blame.

“The article hit home, because my career and life centered around people eating, and this was a huge threat to our food supply,” Taylor says. According to Ben Hutchins, an invertebrate biologist with Texas Parks and Wildlife Department, bees pollinate close to 50 percent of our agricultural crops in addition to wildflowers and other native plants.

Inspired, Taylor signed up for beekeeping school at Round Rock Honey, which produces honey from hives throughout Central Texas for sale at grocery stores and farmer’s markets. “The first day, we suited up and opened a hive,” Taylor recalls. “It was an electrifying experience, hearing the hum of tens of thousands of bees.” Soon, he and Casie started keeping bees at their Spicewood home.

The idea for combining those bees with a restaurant came in fall 2008, when the Halls found riverfront property and a two-story building that had renovation potential. They added a kitchen and converted the first floor into an intimate bar and dining room. “We wanted to do something in the country, focused on the environment; an authentic link with the natural world,” Casie recalls.

Both took an active role in designing the space, incorporating bee motifs wherever they could. The hexagonal shape of honeycomb appears in light fixtures, in the ceiling design, and three subtle cells of pale wood randomly placed on each table top and the bar. Golden yellow lights evoke the color of pure honey, and a chunk of real honeycomb from a hive frame graces a wall by the entrance.

“After we made the bee our mascot, we started seeing all these similarities with how we operate and the nature of the honeybee,” Taylor says. “Bees are seasonal creatures, reflected in how we pay attention to the season. Bees are famously noted for being busy and hardworking. In the restaurant, as in a hive, everyone has a duty and when everyone does their job, it succeeds.”

And, of course, the food creates a buzz of its own. Taylor, Chef de Cuisine Adam Brick, Beverage Director Jose Luis Sapien, and their staff use honey in creative ways. For example, Brick recently created honey vinegar using classic apple cider vinegar fermented with honey. When I visited, a bee pollen miso adorned several items on the seasonal menu. “We have this wonderful product and a lot of it. We want to highlight it, but not everything is sweet,” Taylor points out.

I started with The Apiary, a flavorful cocktail of honeycomb-infused bourbon, lemon, sarsaparilla, and dry curaçao over ice. My friend Kathy Weiler and I shared an order of Egg Toast—brioche topped with dry-aged parisa (a steak tartare from Castroville), a feisty jalapeño, and nutty French cheese; the contrast of textures and creamy/spicy flavors set the stage for a remarkable meal. For her main course, Kathy had Icelandic cod with barley and farro grains cooked in carrot stock and dressed with bee pollen miso. I ordered duck breasts glazed with honey, a rich and slightly sweet dish complemented by rutabaga-duck confit, wild plum sauce, and a vinaigrette accented with black caraway and green fennel seeds. We wrapped up with Apis’ version of a honey bun, a rich pastry topped with rum-soaked raisins, pecans, and a dollop of horchata ice cream.

As we dined, we discussed the important role bees play in the plant world, and I vowed to find out more in the coming weeks. A typical hive, I learned, contains 50,000 bees, including a queen, male drones, and female workers. The workers collect pollen, produce and tend the honeycomb, guard the hive, or scout out nectar sources. Honey-making workers have a special stomach that creates honey and jelly, which other workers feed to the colony. Bees must collect nectar from about 2 million flowers to make one pound of honey, making all those wildflowers around the restaurant very important. And consider this: The average bee makes only about a quarter teaspoon of honey in her lifetime.

The Apis bees live in hives at the back of the property with plenty of flora between them and the restaurant. Guests can glimpse them from the restaurant parking lot, but aren’t likely to accidentally encounter the little honey-makers. Those who want to see them in action can schedule an apiary tour. A couple of professionals now manage the hives so Taylor can focus on the restaurant.

“Our first year, we served as a special-occasion kind of place,” Taylor says, but the couple soon realized that if they brought in happy-hour specials and simpler menu options, they’d appeal to a broader section of diners. They also added a covered outdoor patio so that diners could enjoy the outdoors year-round.

“To be honest, I’m just a country person; it’s where I live and want to make my life,” says Taylor. “Nature plays such a big part in everything with the restaurant.”

I’ll drink my honey-infused cocktail to that.