The Best Way to Cook Your Gulf Coast Catch

If fishing on the Gulf Coast is your idea of a weekend well spent, use these tips and recipes to enhance the dining experience 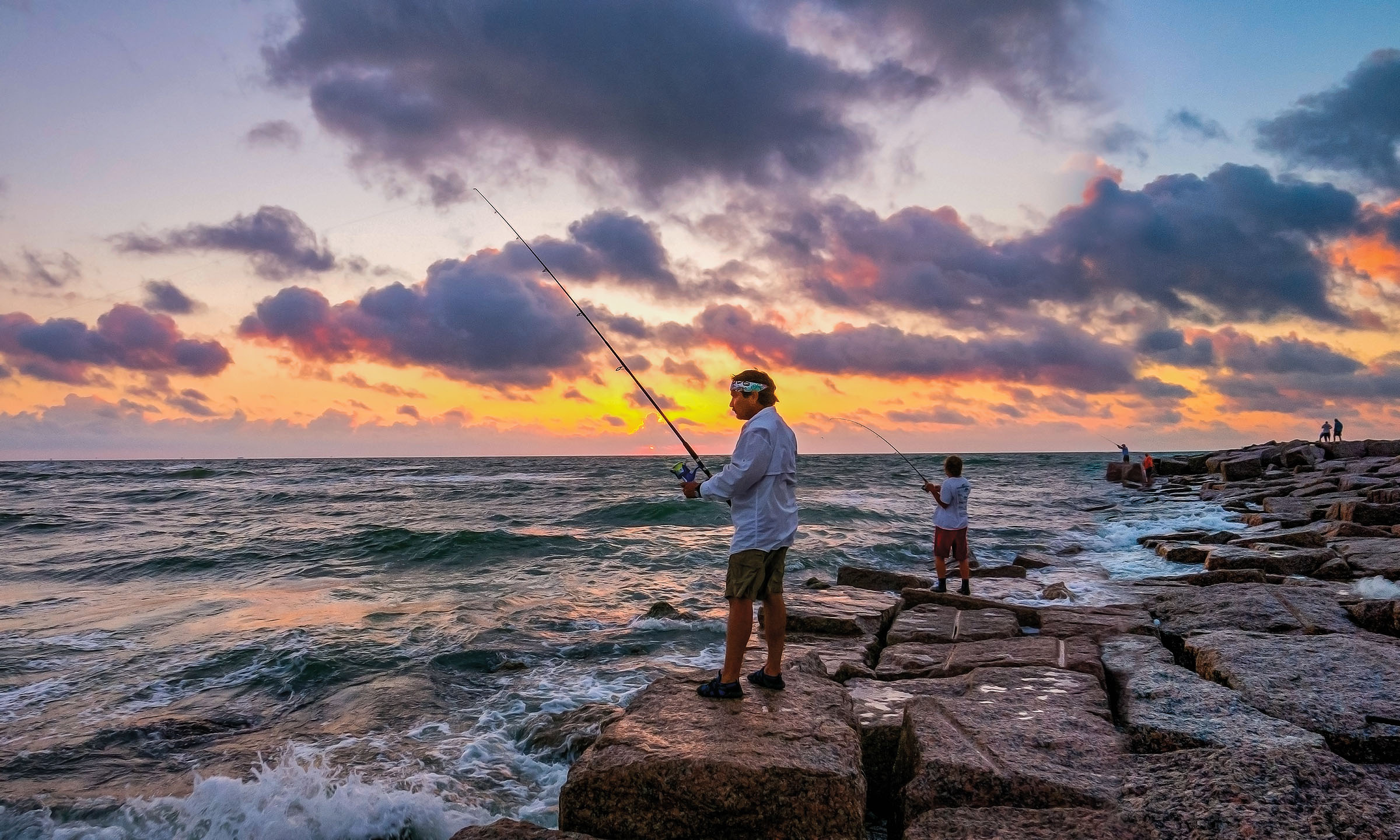 Growing up in a South Texas household of outdoor enthusiasts made fishing along the Gulf Coast a routine family affair. We spent our springs hooking red drum in the bays and our summers pulling king mackerel, amberjack, pompano, and red snapper from offshore waters. At 14, I hooked my only sailfish, a leviathan that leapt out of the water, flashed its sail-like dorsal fin, then defiantly spit out the hook before it disappeared into the deep blue.

Had I caught the sailfish, I would have eaten it. We ate everything we could legally catch and prepared our wild fish in midcentury American fashion: whole flounder baked in lemon zest, butter, and parsley; mackerel beer-battered and fried; broiled red drum coated in spicy mayonnaise; catfish rolled in crunchy pepper cornmeal; crab and shrimp boiled in bouillon, onion, and red pepper; and raw oysters topped with lemon juice, Tabasco, and horseradish. 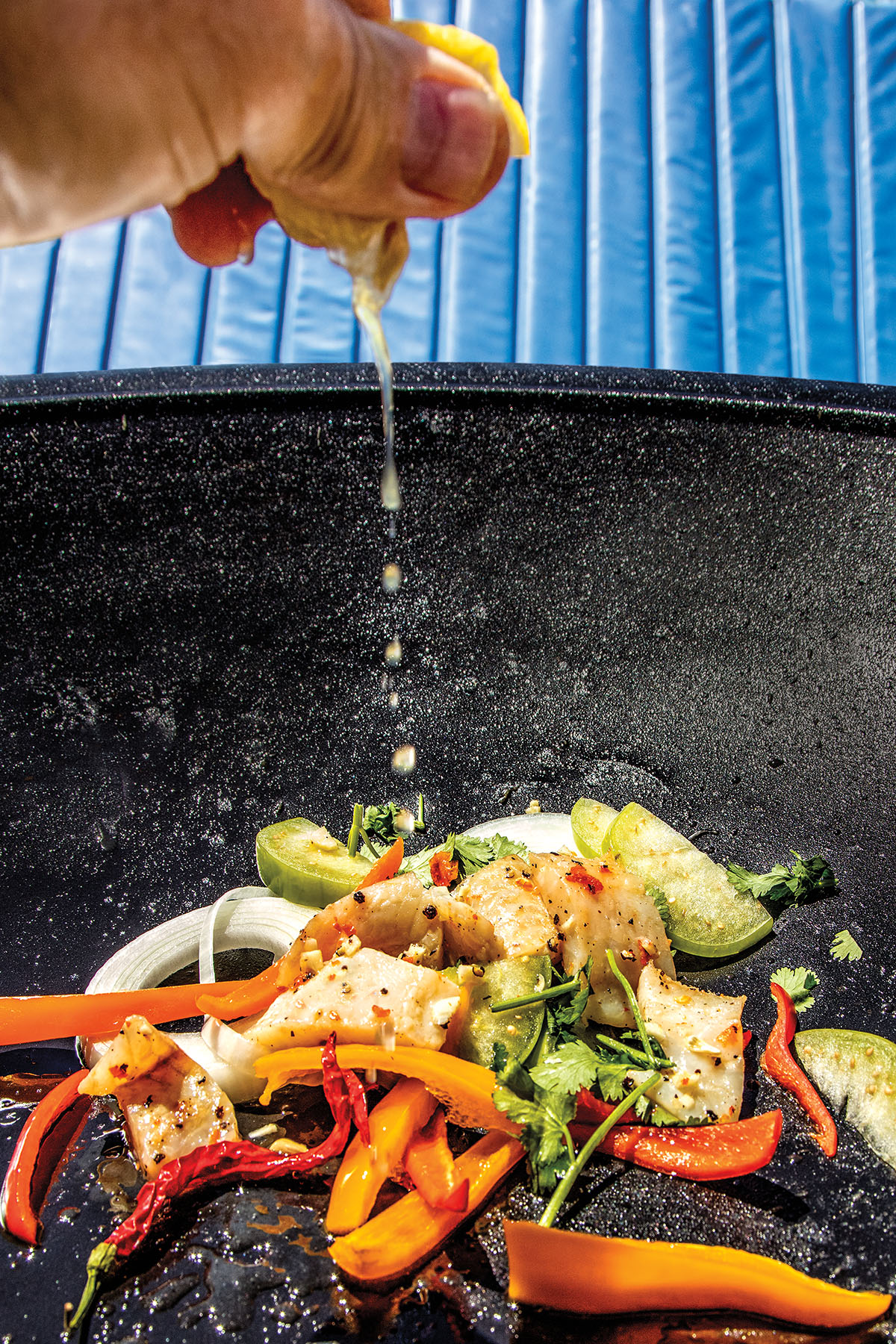 A disco is a great vessel for cooking fresh Gulf fish.

Our go-to fishing spot was Mustang Island, one of few inhabited islands in the long string of beaches, sand dunes, mangrove shallows, and seagrass flats that comprise the state’s coastline. Development has overtaken some of the island’s dunes and wetlands since my youth, but much of Mustang Island still exists in its natural state. Coyotes and rattlesnakes frequently share parking lots with RVs, and great flocks of shorebirds are often the only creatures utilizing the rolling surf and cinnamon shores. Sea turtles feed along the jetties and lay their eggs beneath the sand. Bayside, fields of seagrass billow in the tidal shallows like an underwater prairie. At Mustang’s south end lies the Packery Channel, where seven years ago anglers pulled an 11-foot tiger shark out of the water—a notable but not unusual event.

Although the island offers many overnight options for today’s visitors, I still prefer hauling a tent or a pop-up camper to Mustang Island State Park. The no-frills getaway was established in the 1970s and offers almost 4,000 acres of native coastal dunes and 5 miles of development-free beaches. For cooking, I bring a double-burner camp stove and a portable propane cooker with a large metal disc-shaped pan, called a disco, designed to sit on a ring above the flame. The disco, often compared to a Chinese wok, is believed to have originated as a plow disc for farming in the fields of Central or South America. But its precise origin is difficult to pinpoint. Both hand-forged and machine-made discos are readily available today, in either cast iron or stainless steel. Disco aficionados have their preferences, but cast-iron discos should be seasoned before use just like a cast-iron skillet.

The disco provides a very hot center for a quick, high-heat treatment of the ingredients before moving the delicate bits to the upper sides, where the temperature decreases. A disco and dependable heat source like a propane grill allow controllable beachside cooking without the hassle of charcoal or wood. A makeshift wind block helps steady the flame, and because the disco sits on legs above the ground, the device minimizes the amount of sand that ends up in everyone’s meal.

Cooking fresh Gulf fish is a relatively straightforward task, but catching them can be a challenge. You’ll need a bit of luck, and live bait like shrimp or mullet often work better than lures. Some anglers obsess over their rigs, but I’ve fished side by side with jokesters using children’s plastic rods and reels who catch plenty of fish. Whatever you choose, make sure to have a valid fishing license and know size and catch limits. The Texas Parks and Wildlife Department publishes and distributes a free fishing, boating, and hunting guide each year with information and illustrations.

A good place to try your luck is along Mustang Island’s bayside, especially if you enjoy kayaking. TPWD offers paddling trails that can be accessed from designated points along the bay, including a man-made channel called Wilson’s Cut midway down the island. The trail route delivers kayaking anglers to a maze of flats and seagrass shallows along relatively calm waters where spawning redfish and flounder dwell. 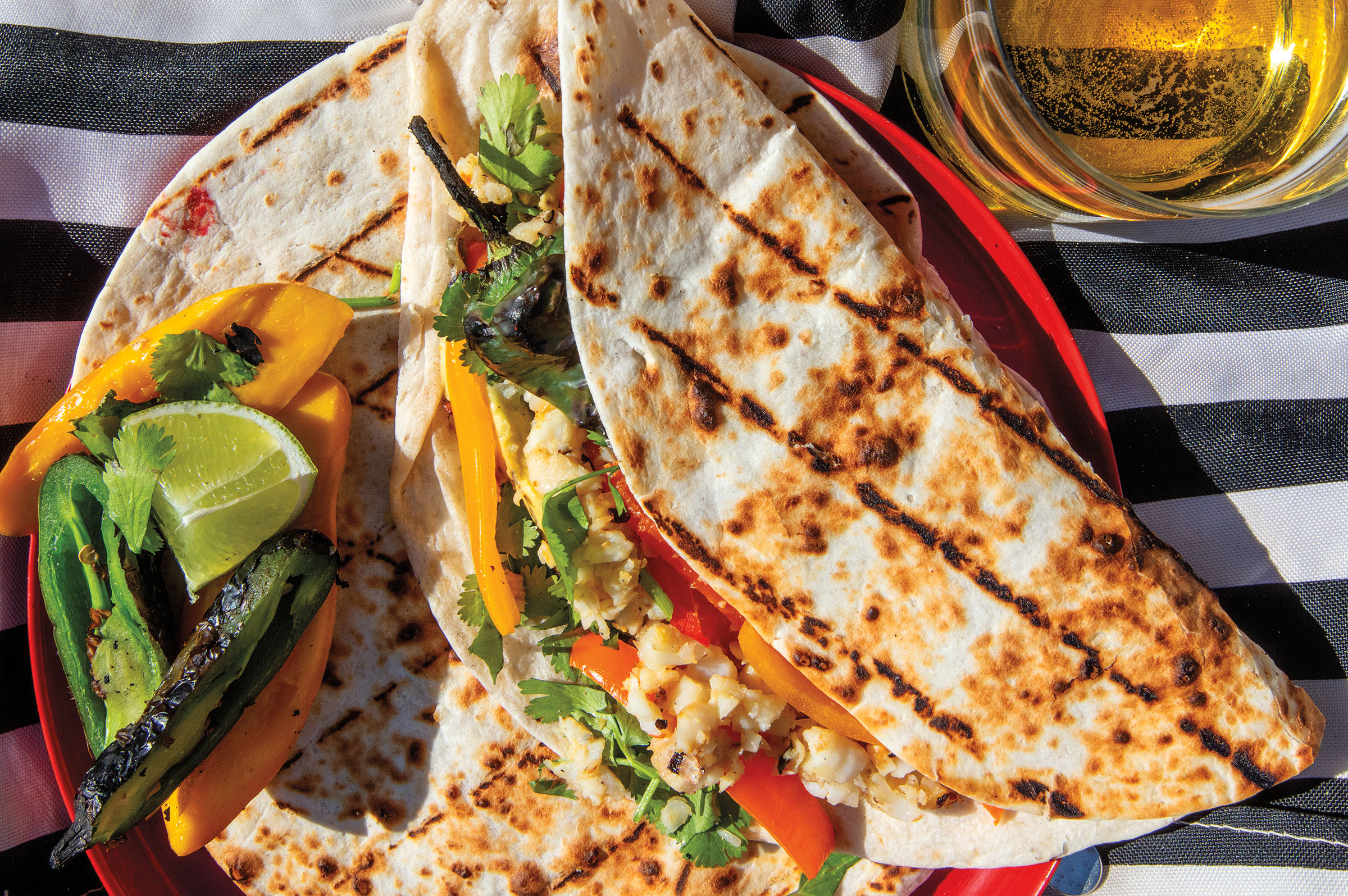 My preferred island fishing spots are the jetties. During a recent trip, I had a particularly good day despite a heavy east wind and swells that swallowed the jetties’ massive blocks of granite. As soon as I cast my bait net I snagged a school of mullet riding the wave crests, perfect for live bait. My fellow anglers and I caught gafftopsail catfish, then red drum, and, after the reds stopped striking, Spanish mackerel and spotted seatrout. Brown pelicans perched along the jetty blocks waiting for handouts, sea turtles surfaced and sank, crabs scuttled in the shallow granite pockets, and sea snails clung to the crevices. In one brief moment, a shark sheared off my rig like a straight razor.

Cooking fresh fish in the disco is simple. It doesn’t take very long and accommodates just about any flavor and texture.

Back at camp, the disco heated up quickly courtesy of the propane flame. We cleaned our catch, then added some oil and fillets to the pan, stirred in veggies and spices, heated up corn tortillas along the upper tier, and gave them a quick flip in the hot oil to finish them off. Cooking fresh fish in the disco is simple. It doesn’t take very long and accommodates just about any flavor and texture you might like to include in your meal.

The most memorable beachside cooking I’ve done was also the easiest. I particularly succeeded with a poor man’s bouillabaisse, a stock sometimes referred to as a fumet, but more likely recognized as fish head soup. As I cleaned that day’s catch of spotted seatrout, I tossed everything but the fillets—heads, tails, fins, and organs—into a large, deep stockpot. The sight of a fish head floating to the surface of a cooking pot can be pretty unappetizing, but I was encouraged by the progress of the flavors. By the time I filtered the stock through a strainer, I knew I had discovered my ideal island meal. The result added up to more than just the sum of its parts: the delicious primitive aroma; the zest of spices, onions, and herbs; and the savory flavor that arises from fresh-caught seafood. The broth embodied everything I love about the island in one simple bowl—the moonlit surf, the cordgrass dunes, the salt-spray breeze, and all the pleasures of the catch rendered down to the taste of the sea.

Ingredients:
A few tablespoons of olive oil
1 Mexican squash, chunked
1 tomatillo, chunked
2 scallions, diced
2 Spanish mackerel fillets, cut in fajita-like strips
2 roasted jalapeños, chopped
2 fresh limes, quartered
Coarse sea salt, to taste
Corn tortillas
Directions:
Heat olive oil in the disco. Test the heat with a few sprinkles of water. If it sizzles, it’s ready. Drop in the squash, tomatillo, and scallions, and stir. Give it a minute, then drop in the fish and jalapeños. Squirt with lime. Add sea salt to taste. Keep stirring. Move from center of disco to edges. Fish should be moist and slightly opaque when done. Serve on soft, heated corn tortillas.

Ingredients:
2 red drum fillets, leave skin on one side
Extra-virgin olive oil
2 shallots, diced
1 tablespoon dried thyme
1 tablespoon cumin
1 teaspoon black pepper
1 lemon, wedged
¼ cup melted butter
Fresh parsley, chopped, to taste
Directions:
Dry the fillets with a paper towel and then coat with a flavorful, extra-virgin olive oil. Press shallots and spices into the flesh. Heat additional olive oil in the center of the disco on low. Place fillets skin down in olive oil at the center of the disco. Keep an eye on the fillets—don’t leave them unattended. Cooking time depends on thickness of fillets. Slide a knife into the center of a fillet. When the fish is flaky, it’s ready. Use a spatula to remove fillets. Plate, then drip a little hot melted butter on them, followed by a squirt of lemon and sprinkle of parsley.