The Fancy Place in Boyd

A hidden pearl puts Wise County on the foodie map 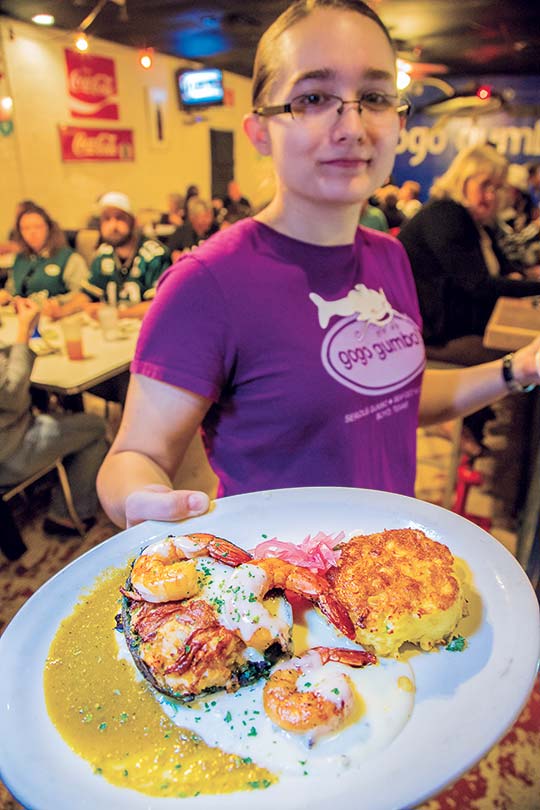 It calls itself “the fancy place in Boyd,” but you wouldn’t know it to look at it, gritty as a Gulf oyster from the outside. If you pass by in the morning, a small sign declaring “Gogo Gumbo!” provides the only notice that foodieness is afoot in this town about a half-hour northwest of Fort Worth.

But at dinnertime, it’s often a different story, with more than 100 eager patrons queued up for a table. Seasoned regulars bring folding chairs and coolers and dispense advice to first-time visitors enticed by the promise of quirky-yet-haute Cajun-Texas fusion cuisine.

The seafood-kitchen concept, hatched in 2008 by chef Kraig Thome, occupies a cramped century-old building on the town’s main drag behind a ramshackle facade, totally incongruous with the reputation Gogo Gumbo! has cultivated far beyond Wise County lines. Next door lives a business that does triple-duty as a pizza parlor, movie rental site, and tanning salon.

Thome, who earned his fine-dining stripes through decades of experience in the private-club circuit in Houston, spent two years scouring locations across the state for a restaurant of his own, finally spying a Craigslist ad for a languishing catfish joint in Boyd. He and his wife, Letty, drove up from Houston and bought it on the spot. In the years since, he purchased neighboring properties to make room for expanded storage, a bakery, and Canteen, a soup-and-sandwich eatery a few doors down.

With booths, tables, and a long bar, Gogo Gumbo! seats only about 50 people, so weekend wait times can extend more than an hour—an issue that became apparent within a few months of opening. “We never thought we’d do that many people,” says Thome, who brought in a paging system because customers were wandering away down the street and missing their table summons. “But it became obvious this wasn’t going to slow down.” One of the first regular diners protested upon finding a line for a table at 5 o’clock in the afternoon on a Friday. Handed a wait pager, the astonished local exclaimed, “Well, isn’t this the fancy place in Boyd?” And with that, Gogo! acquired its slogan.

Inside, the décor is both whimsical and casual, reminiscent of a funky coastal boardwalk diner, with a large mounted tuna on the back wall, oars for he/she restroom markers, campy Americana signage, and a few video games. The room was once a movie theater, so the floor isn’t quite level; a marble dropped in the front will roll gradually toward the rear.

I learned of Gogo Gumbo! from my friend Mike Ballard, a resident of Azle, in adjacent Tarrant County. We eventually made plans to meet for dinner. “On a previous visit, my wife Jeannie had the catfish dinner, and she said it was the best she had ever eaten, and that is saying something,” Ballard told me. “We love catfish and eat it every place we try.”

I’m a vegetarian, so my options were somewhat limited; I enjoyed an appetizer of lightly battered tempura green beans and the house salad with lightly spiced pecans, tangy dried cranberries, and crumbled feta cheese scattered on a bed of fresh baby greens. Mike, meanwhile, enthused over his “crabby mushrooms” appetizer and declared the chicken-sausage gumbo excellent, but somehow still a letdown compared to the seafood gumbo he had eaten there previously.

Tell that to Las Colinas resident Jeff Kunkel, who makes the hour-long drive to Boyd at least monthly, usually with a group of the uninitiated. “Chicken-sausage gumbo is one of Thome’s best dishes,” he says. “The dark mahogany roux is the perfect foundation … you taste the flour and oil mix up front, and then it hits you with a smoky taste, perfectly complemented with blackened chicken and vegetables. Your mouth just waters.”

Kunkel, who played shortstop for the Texas Rangers in the ’80s, is a frequent student at the cooking classes that Thome conducts, which sell out immediately. “Playing professional baseball, you meet exceptional people who have an amazing drive and passion for what they do. Chef Thome is one of those.”

All dishes, including desserts, are prepared by a kitchen staff that scrambles to make all orders from scratch under strict time limits. They have no heat lamps, and there is no walk-in freezer. The menu changes weekly with six to eight featured entrées. Varieties of gumbo justify the namesake, but the Cajun genre is just one of myriad cuisines that creep into the mix. Staples such as seafood hush puppies and blackened shrimp accompany items like lobster mac-and-cheese, andouille-stuffed quail, tempura green beans, brisket tacos, crab chile relleno, and goat cheese salad. At Canteen, which shares the kitchen but maintains a separate daily menu, club and chicken-salad sandwiches are offered alongside more exotic fare like Vietnamese banh mi or pretzel Reubens.

Seafood may be the bait, but the desserts have won a following, too. More than half of diners order something sweet to follow the meal, and many patrons order pies to go. Our table shared the stacked Jack Daniels mousse pie, which had a whisper of whisky and a fluffy chocolate-cream filling. By far, though, the most popular dessert is the 2die4, a cream-cheese mousse topped with assorted berries, ladyfingers, and almond cookies.

Thome and crew feed around 1,300 people per week, nearly equivalent to the entire population of Boyd. On Friday and Saturday, 80 percent of diners funnel in from points across the Dallas-Fort Worth metroplex or beyond. Now, with outsiders thronging Gogo!, residents of Boyd have grown to appreciate the pagers. When the weather’s nice, the sidewalk outside becomes a convivial gathering space, with locals and visitors getting to know each other in an impromptu tailgate party.