This Houston Brewery Made Headlines with Its Heroic Harvey Rescues

Written by Art Williams, Photographs by Will van Overbeek | From the June 2018 issue | Updated: November 5, 2018 | Filed Under: Breweries/DistilleriesEat + Drink 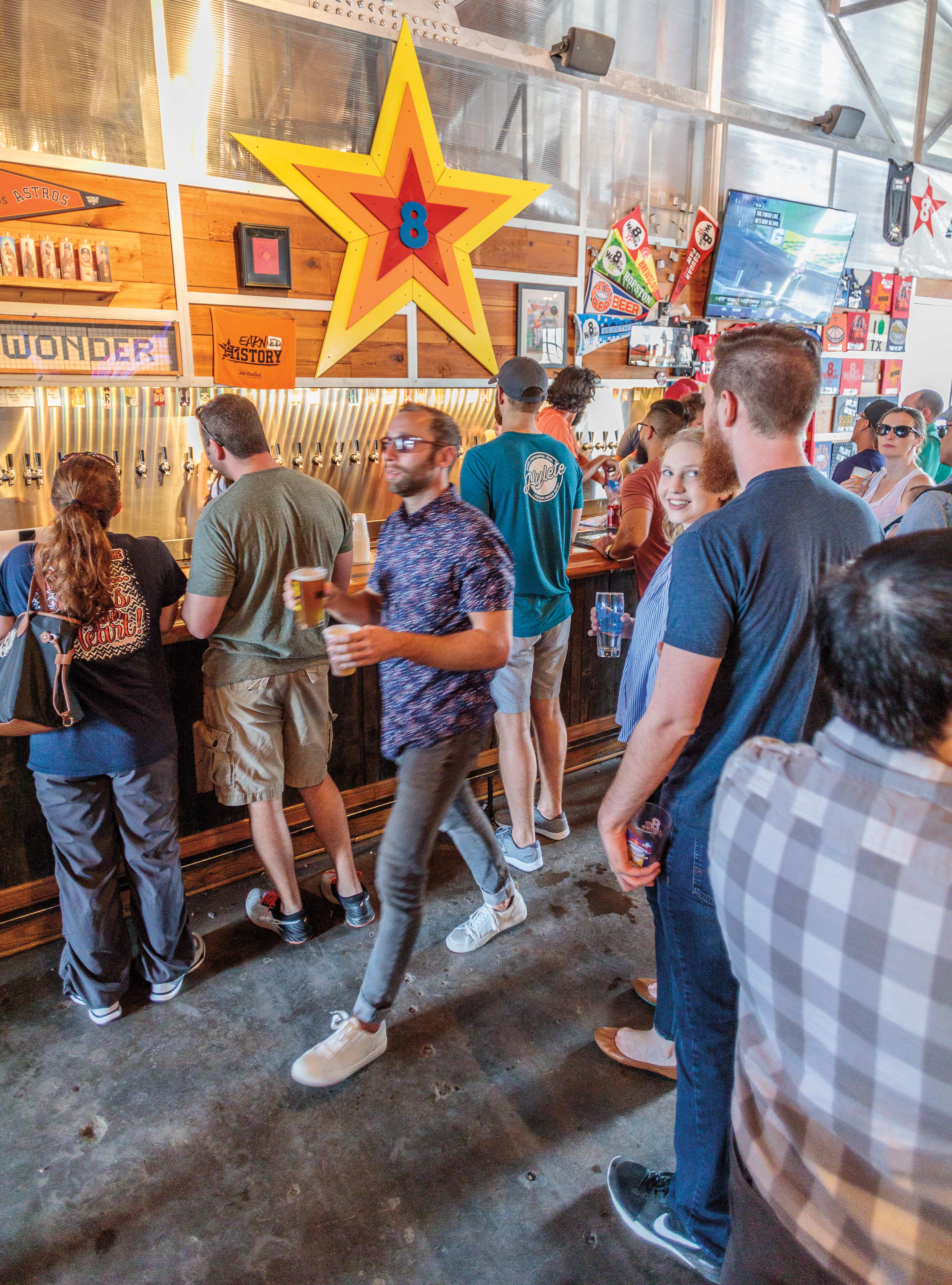 On a mercifully cool Friday evening in the acre-size backyard of Houston’s 8th Wonder Brewery, the post-workweek crowd streams in, ready to cut loose.

And just as you’d expect of the fourth-largest city in America, the vibe is delightfully diverse—a 20-something couple canoodles in a seating area made from a retrofitted shipping container; a group of coworkers roll up their sleeves, setting newly freed elbows on a picnic table; and a trio of pals stare up at a television watching the tense last moments of a basketball game. Different races, ethnicities, and age groups have come together, cradling amber and coffee-colored pints of beer, carrying on the centuries-old tradition of breweries, pubs, and taverns as centers of their communities.

But the 5-year-old brewery, located in East Downtown, doesn’t just facilitate the community, it participates in it.

While people mingle and play cornhole in the yard, a dark green military cargo truck adorned with the 8th Wonder logo sits unassumingly near the fence line. During Hurricane Harvey, a friend who knew about the brewery’s large truck, a six-wheel-drive M35, called co-founder Alex Vassilakidis and asked if Vassilakidis could take it to rescue some family members who’d been stranded in south Houston. Once he and others evacuated one house, next-door neighbors called out for help, and that word-of-mouth chain reaction resulted in five 16-hour days of extricating strangers, the brewery staff navigating the crisis-stricken streets of Houston to rescue nearly two dozen residents who’d been stranded in their homes.

“Our city was hurting, and people were struggling,” recalls co-founder Ryan Soroka, who was in Dallas at the time of the hurricane with his wife and young child. “We had a vehicle that can get through waters, and so they went out.”

The brewery had bought the truck a year before, thinking it would be a fun prop for patrons’ selfies and for use in marketing and promotion. Soroka never imagined it would be a lifeline. “If it even saved one family’s life or got them out of a dangerous situation, it was worth every penny,” he says of the truck that eventually became too water-logged and broke down. While the brewery staff does have plans to fix it, the vehicle currently takes on a symbolic role as a memorial. 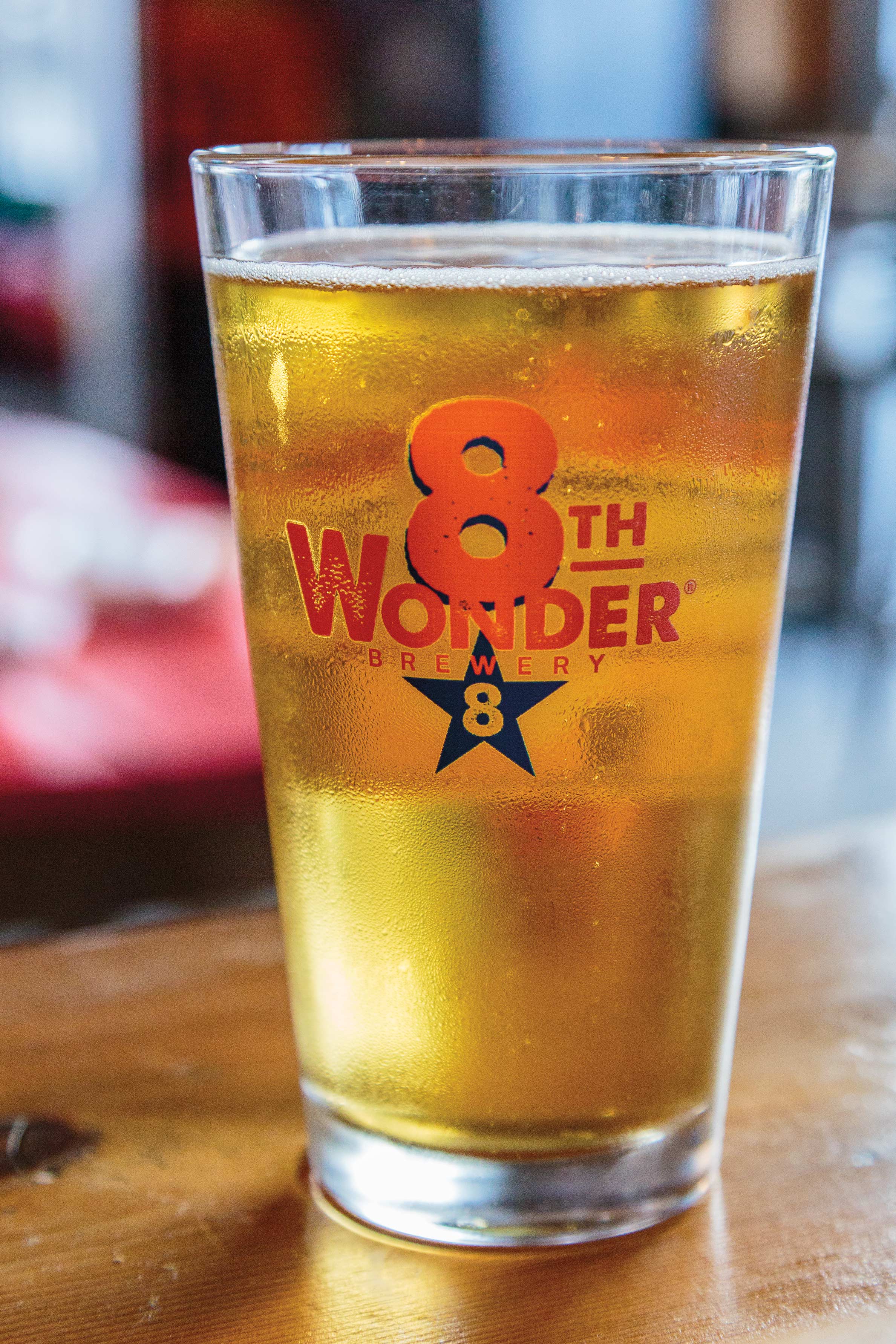 For $15, you can purchase a souvenir pint glass and three tokens worth of beer.

With its unwavering dedication to the city, it’s no wonder 8th Wonder has become a local favorite. Patrons line up at the counter to pay $15 for a 16-ounce souvenir glass and three tokens that can be exchanged for three beers. You can also get a plastic cup and three tokens for $12, or a plastic cup and one token for $5. The brews, which total 12 to 15 on tap at any given time, have cheeky names that wink to life in Houston: Weisstheimer, a German hefeweizen that won gold at the prestigious U.S. Beer Championship in 2017 is a play on Westheimer Road, a well-known east-west artery. Cougar Paw, a mild and malty red ale, is an ode to the University of Houston mascot—a portion of its sales benefits scholarships for the Hilton College of Hotel and Restaurant Management, where Soroka earned his master’s degree and hatched plans for the brewery. Brew GK, an apple kolsch, is a collaboration with rapper Bun B, a member of legendary Houston rap group UGK. 8th Wonder’s beers are purposefully lower in alcohol content and are highly drinkable, meant for sipping in notoriously hot and humid Houston. “In a city where it’s summer nine months a year, it’s hot,” Soroka says, “and I don’t want to be chewing through 8, 10, 12-percent alcohol-by-volume beers.” Even Rocket Fuel, a typically hefty porter blended with milk sugar and Vietnamese coffee from local Greenway Coffee Company, feels lighter.

Any selection pairs well with fare from the gold-plated food truck Eatsie Boys out back. The elote fries adds a Mexican street snack kick to waffle fries, which are slathered with buttered corn, garlic aioli, hot sauce, cotija, and green onion, and come with lime wedges for squeezing. The menu also features well-known standbys, including a Cuban sandwich, burger, and pimento grilled cheese. Eatsie Boys, which formerly had a brick-and-mortar location, was Soroka’s first business venture before he downsized it to focus on the brewery, a risk that paid off—8th Wonder is the 14th-largest craft brewery (production-wise) in the state.

8th Wonder’s name is a reference to the Astrodome, which due to its unprecedented size at the time of its opening in 1965, was hailed as the “eighth wonder of the world.” The Astrodome sits 5 miles from the brewery’s industrial ’hood. The Toyota Center, home of the Rockets; Minute Maid Park, home of the Astros; and BBVA Compass Stadium, home of the Dynamo, are all within walking distance. The brewery nods to its proximity to three major stadiums in its sports-themed taproom. Memorabilia ranges from 20 original Astrodome seats to a signed square of hardwood from the Rockets’ championship in 1994. A customer also gifted a set of patron saint candles adorned with the faces of Astros players. During Game 7 of last year’s World Series, eager fans packed the brewery hoping for a shift in Houston’s sports luck and a cosmic response to the sorrow of Harvey. They set up the candles in a corner and lit them. People prayed over them. And it worked. It also made 8th Wonder Brewery a triple threat—local hang-out, scrappy crisis response team, and shrine. And the beers are pretty darn good, too.