A spirited Jaunt to the Hill Country 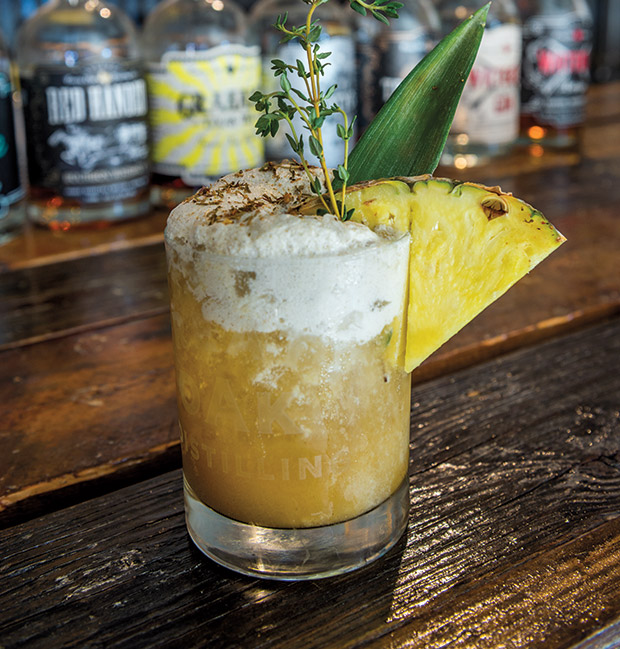 Founded in the 1850s, the town of Dripping Springs—just west of the booming city of Austin—hosts so many weddings that the Texas Legislature last year designated it as the “official Wedding Capital of Texas.” But many people these days know the Dripping Springs area for its surprising concentration of distilleries, breweries, and other drinks-related businesses that allow visitors to taste beer, cider, and spirits right from the source.

Leave the Driving to us

Once there, visitors find sprawling oak trees, postcard-worthy views, and a welcoming vibe that encourages lingering.

This was clear during a recent trip to Treaty Oak Distilling Company, which recently moved from a small warehouse in North Austin to nearly 30 picturesque acres at the edge of the Texas Hill Country. Treaty Oak’s new Ranch, which opens to the public Friday through Sunday for tours, tastings, and cocktails, has a lot to offer besides drinks: live music on weekends, picnic-friendly food, games such as washers and disc golf, and even a twice-monthly helicopter tour that’ll give you a bird’s-eye view of such area landmarks as Hamilton Pool and Lake Travis.

A good place to start a distillery visit is at the gift shop, where you can enjoy a guided sampling of the various spirits Treaty Oak produces, including the popular Starlite Vodka, Treaty Oak Rum, Red-Handed Bourbon Whiskey, Waterloo Gin, and Waterloo Antique, an unusual barrel-aged gin that can hold its own against whiskey in a cocktail. Here, too, is a wide assortment of bar necessities for sale, including cocktail books, jiggers and shakers, syrups and bitters, and Treaty Oak shirts, jackets, and hats.

On my last visit to Treaty Oak, however, my companion and I headed straight to the bar in the Rickhouse, an airy metal-and-wood building with picnic tables and a couple of couches positioned amid the rows of stacked barrels aging spirits. At the back is a long wooden bar where you can order charcuterie boards, duck confit tacos, vegetable plates, and other picnic-friendly fare from a menu created by Chef Jason Tolleson, formerly of the Four Seasons.

One of Texas’ many radiant, cloudless afternoons will probably beckon you outside, as it did us. We sat at a picnic bench in the shade of a massive oak tree, our feast between us. “There’s booze in the barbecue sauce,” my friend exclaimed as he dug into his burger. Even my brisket sandwich had a special touch: gin-brined pickles, which imparted a sweet and herbal crunch. As we dined, we watched the activity blossom around us: a group of friends tossing beanbags near the fire pit, a playful Great Dane puppy leading a young couple around the expansive lawn in front of the distillery, a trio of kids squealing beside a slide in a play area just for them.

Barnes, like some of the other beverage producers in the Dripping Springs area, has tapped into the laid-back charm of the countryside to create something magical. “It’s an element of escape for some folks, getting food and drink in a Hill Country atmosphere, and we wanted to provide that kind of experience,” Barnes says.

Just up the road at a complex called Craftsman Park, Argus Cidery, Revolution Spirits, and Last Stand Brewing offer additional spirited adventures. Argus specializes in champagne-style ciders produced mostly from Texas-grown apples. On weekends, you can sample these ciders, along with fer-mented libations like Argus’ Tepache—an effervescent, slightly salty drink made from pineapple—in a tasting room decorated with vintage photos and a hand-strung chandelier.

Nearby is Last Stand Brewing, a year-old brewery that recently added fermenters to keep up with demand. Friday through Sunday, a taproom and shaded beer garden open for tastings of Last Stand’s four popular year-round brews, such as its delicious Coffee Porter and Belgian Pale Ale, along with limited-production beers and special releases. “By springtime,” says co-owner Mandi Richardson, “we hope to have a food truck out here, so you can lounge in our Adirondack chairs, sample some of our beers, have some food, and listen to live music during taproom hours.”

Revolution Spirits, adjacent to Last Stand, opened at Craftsman Park in 2013 and released its first bottles of gin in late February 2014. “We sold our entire batch in one day,” says co-founder Mark Shilling, “and it happened to be Washington’s birthday. I didn’t think about it at the time, but Washington was not only our first president; he was also our greatest revolutionary and also a substantial distiller of spirits. We look back at it now and think of it as serendipity.” These days, along with two kinds of gin, a coffee liqueur, and fruit-based liqueurs, Revolution is experimenting with brandies, bitters, and different barrel-aging techniques. Open for tours and tastings on Saturdays and by appointment, the distillery plans to add a cocktail bar and a formal tasting room later this year.

Requisite with any trip out to Dripping Springs are stops at Deep Eddy Distilling, as well as Twisted X Brewing Company and San Luis Spirits, which makes both vodka and gin. Nearby, Jester King Brewery, which specializes in ales that use naturally occurring yeast, occupies a bucolic spot in the hinterlands between Austin and Dripping Springs. Founder Jeff Stuffings cares so much for this land that the brewery recently purchased 58 surrounding acres to ensure it won’t be developed. In fact, Jester King incorporates elements of the land straight into its beer.

“We use well water, locally malted barley, and a lot of local fruits and herbs and spices, but we get our sense of place in the beer world from the microbes that are unique to this little part of the Hill Country,” says Stuffings.

With such close proximity to each other, the businesses out here share resources, collaborate on projects, and often send visitors to their neighbors down the road.

“Every weekend, Jester King gets a huge volume of folks, and they always send people down to us,” says Revolution Spirits’ Shilling. “Treaty Oak has been doing the same, and when people visit us here, we always suggest they visit our neighbors as well. It’s a great sense of community. We all help each other out, and people take notice.”