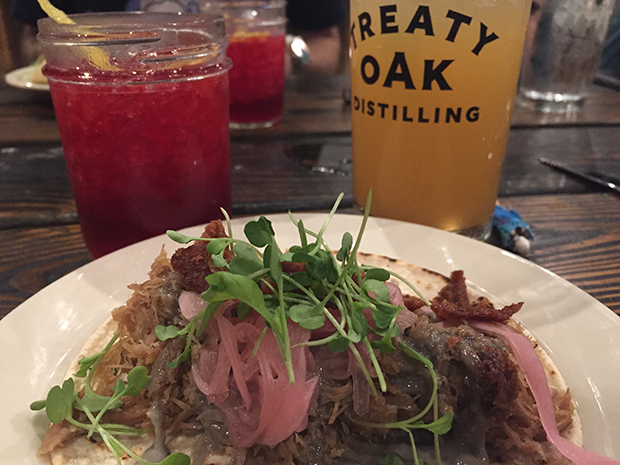 If visiting a distillery doesn’t strike you as a family-friendly activity, then let Treaty Oak Distilling Ranch in Dripping Springs smash that preconception.

Check the Treaty Oak website for details about events, hours, and recipes, such as these:

Mix well and pour over ice. Garnish with a lemon wheel or lemon peel.

Combine ingredients in a mixing glass and shake vigorously with ice to chill. Strain into a chilled coupe or martini-style glass. Dust with nutmeg.

Yes, there’s a distillery here making world-class gin, whiskey, and other spirits; and yes, there’s a brewhouse cranking out three styles of delicious beer. And you can tour the facilities, sample the goods, and geek out to your heart’s content about barrel-aging, hops, and mastering the mash bill. Yet a visit on any give Saturday reveals that the 27-acre ranch makes a great place for families, too.

There is live music here every weekend, and both dancing and running around freely are encouraged. Kids can play beanbags near a fire pit, holler as they whoosh down a slide, and climb one of the many mature oak trees that gleam with lights once the sun sets. Meanwhile, parents can work on two-stepping skills or relax at a picnic table with a cold one. 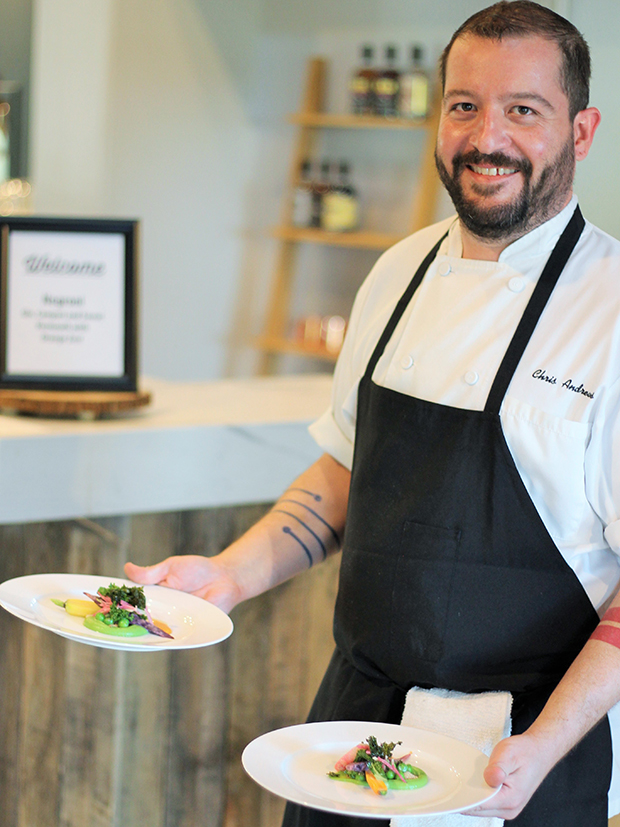 Head Chef Chris Andrews, who started his culinary career at Austin’s Driskill Hotel, accepted the gig at Treaty Oak after working his magic in the kitchens of the city’s Carillon, Second Bar and Kitchen, and Boiler Nine. “I have a fine-dining background, but I’ve always loved to cook outdoors,” Andrews says. “We use our smoker for a lot of things— briskets, of course—but also onions for sauces, meatballs, and maybe some chicken wings in the future. We’ll change things.”

The ranch’s main grill guy, Lee Fenner, knows fire and how to make it work for him: He even has a degree in ceramic engineering and worked as a potter in a previous life. The bourbon-glazed spare ribs, crispy duck tacos with pickled onions, and the nuanced brisket in the restaurant’s Vietnamese-inspired sandwiches all benefit from a kiss of smoke.

Chef Andrews notes, “I always want to have a balance of fat and acid and umami, even though I don’t like that word much. I like to get hit with a bit of fattiness that coats your tongue, a contrast of texture—something crunchy, soft, or chewy—with acid at the end, usually from citrus, as we juice a lot of lemons, limes, grapefruits, and oranges around here.”

He nods at the bar, where the ranch’s beverage director, former US Army combat veteran Anthony Gonzales, runs a tight ship. Post-Iraq, a bartending class in Waikiki lit the flames of a new passion for Gonzales, who relocated to Austin in 2016, and eventually joined the team at Treaty Oak.

Current libations on the menu include a magnificent Mai Tai—made with the ranch’s Treaty Oak Rum, house-made orgeat, and freshly squeezed juices—a nod to Gonzales’ time in Waikiki.