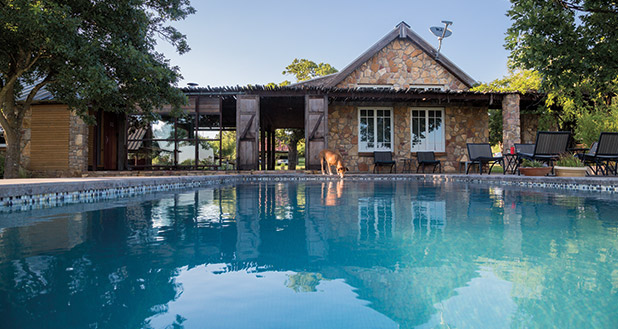 Just a few hours into our first visit to Rancho Loma, it was clear that my husband and I were destined to return again and again. I told Marshall so, as we sat near the crackling flames of the fire pit, winding down with conversation and coffee after an extraordinary dinner at this remote ranch house restaurant. He nodded in happy agreement.

Earlier that day, however, Marshall had asked me as we drove westward from Fort Worth, “Tell me again: What’s in Coleman, Texas?” It was a valid question, after all.

I reminded him that our dining destination was actually 10 miles outside of Coleman, about an hour southeast of Abilene, and that its reputation had intrigued me since I first heard of it a few years ago. I finally added Rancho Loma to my to-do-soon list when owners Robert and Laurie Williamson added a stylish lodging component.

Even before the debut of the five-room guesthouse, the Rancho Loma restaurant—open for dinner by reservation on Friday and Saturday—enjoyed a decade of steady business from diners who traveled to the ranch from nearby Abilene, San Angelo, and Brownwood. But as word spread and the culinary curious began trekking for dinner from as far as Midland and Dallas, the Williamsons decided to add a contemporary bunkhouse. Rather than face a long, late drive home, dinner guests could stroll a short distance from the renovated 1878 ranch home that houses the restaurant to a lodge with marvelously comfortable rooms.

Our new friends Lee and Jeff, a couple from Gainesville whose company we enjoyed beside the fire pit, told us that they typically stay all weekend. “We couldn’t settle for just one night,” said Lee. “The food’s too good to quit after only one meal. And we love exploring the countryside all day on Saturday.”

That people would stay the whole weekend surprises Laurie, a self-taught chef. “There’s not a whole lot to do out here,” she notes.

That suits Marshall and me just fine. After a quick dip in the swimming pool, a visit with the family’s friendly dogs, a look around the vegetable garden, and a stop by the barn to greet the resident goats, lambs, chickens, and horses, we were ready for a nap. Before the dinner hour, we wandered onto the communal porch outside our room to watch the sun set, one of Rancho Loma’s more popular pastimes. There’s also a patio area with couches, where we sipped the wine we had brought and visited with other guests.

At dinnertime, we wandered back to the ranch house, where some 30 guests gathered at wooden tables that seat two, four, or six. With red shiplap walls, a dark beadboard ceiling, and Robert’s black-and-white photos of horses and landscapes, the resulting feel is one of casual comfort.

Marshall and I settled into a cozy nook softly lit by tea lights. We served ourselves water from a vintage blue bottle, and Robert stopped by to refill our wine glasses with a cabernet sauvignon we’d brought from home.

Soon, courses began to appear. At Rancho Loma, there’s one menu per evening. Vegetarians and those with other special diet requests can be accommodated with enough notice, but we eagerly received whatever Laurie sent out during our three hours of leisurely supping.

Laurie’s plump grilled quail were rubbed in a slightly spicy, savory seasoning. The following course was the perfect foil: Sweet pear slices and nutty, salty Manchego cheese shavings complemented a bed of slightly bitter arugula. A judicious treatment of light vinaigrette with a sprinkling of toasted pumpkin seeds rounded out the dish with tart and crunchy components. 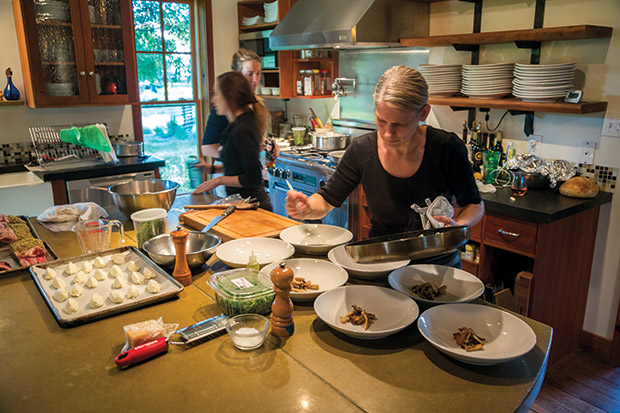 Simple and sublime all at once, tender ravioli pockets filled with butternut squash arrived drizzled with olive oil and topped with a few Parmesan shavings and a scattering of pine nuts. Our wine proved an ideal match for a rib-eye, grilled over a wood fire and accompanied by creamed Swiss chard. The finale was a dark chocolate pudding that was blessedly semi-sweet, and yet another beautiful pairing with our wine.

After a post-dinner fireside chat, we slept off the evening’s indulgences and awoke to the peaceful sounds of chatty chickens and roosters nearby. We sipped coffee on the deck, then wandered back to the restaurant for a plate of Laurie’s huevos rancheros over black-bean purée. When breakfast was cleared away and most guests had departed, we enjoyed a visit with Robert and Laurie at the polished concrete countertops in their casual, modern kitchen to talk about Rancho Loma’s evolution and the art of feeding people.

After leaving the television and film business in Dallas in 1998, the couple came across land in Coleman County, envisioning it at first as a weekend getaway. Soon, though, they moved here, liking its position at the top of the Edwards Plateau, with plenty of oak trees, water, and rock. “There’s everything the Hill Country has, just not the population,” says Robert.

Noting that travelers are often on a path between Austin and Santa Fe, Robert and Laurie set about making additional plans, including a new pizzeria that opened recently in Coleman. Additional projects in the works include a coffee shop, an art gallery, and a winery.

As Marshall and I pulled away for the drive home, we admitted we’ll be back before it’s time for art and coffee in Coleman. Though we’ve learned that it’s hard to leave Rancho Loma at all.