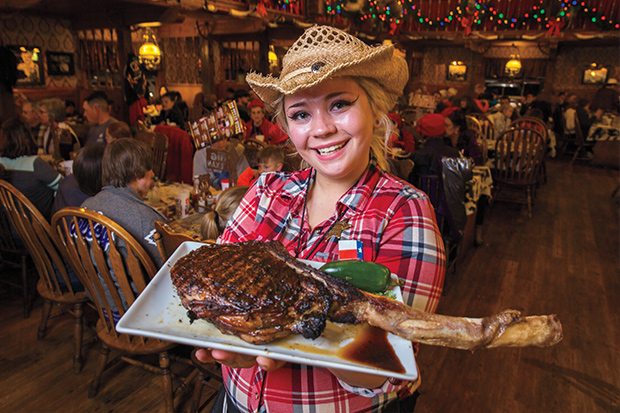 At The Big Texan, a 72-ounce steak is yours for free—if you can eat it (and a slew of side dishes) in an hour.

Worldwide, Amarillo is probably most famous for The Big Texan Steak Ranch and its free 72-ounce steak (“if eaten in one hour”), a deal promoted on billboards from Arizona to Arkansas. R.J. “Bob” Lee opened the restaurant in 1960. In front of the grill, he reserved a table for cowboys from the nearby stockyards, selling them nickel beer and watching them devour beef. Lee settled on the steak challenge and over-the-top Western décor because he saw how these real-life cattlemen captivated travelers and thought a Texas-style eating contest could attract new customers.

At The Big Texan, a 72-ounce steak is yours for free—if you can eat it (and a slew of side dishes) in an hour.

Today, Lee’s sons Bobby and Danny manage The Big Texan, which now operates a craft brewery on-site. The restaurant’s interior is a cinematic saloon come to life, complete with taxidermy mounts, Longhorn displays, and tables laden with all manner of steaks. Danny tells me about a customer who visited The Big Texan with his granddad decades ago, and as an adult made a point to bring his own grandkids here just for the experience. He says the family encounters those comments all the time. “I never get tired of hearing that,” Bobby adds.

In east Amarillo, a cash-only dive called the Coyote Bluff Cafe, located south of I-40 on Grand Street, offers a spicy Burger from Hell. The devilish half-pound burger is accompanied by sautéed jalapeños, Tabasco sauce, and a secret habanero-based “Coyote Hell Sauce.” 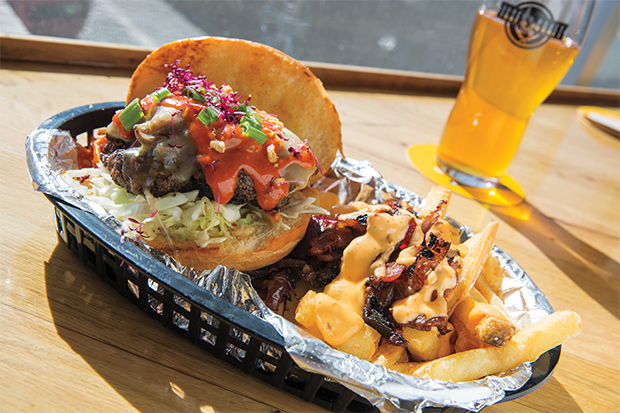 YCSF Craft veers from tradition with its Korean- style tacos and other delicious items.

Then there’s YCSF Craft. Just a couple years old, this establishment has already been featured on the Travel Channel for its unusual dishes, from rémoulade-drenched “Animal Fries” to Korean-style bulgogi steak tacos. YCSF stands for “Yellow City Street Food,” and Chef Scott Buchanan is all about experimentation. “We’re taking different regional cuisines and focusing them through a local lens,” he explains. “We want to try and capture an experience and share it with the city.” In addition to YCSF, Buchanan and his business partners will soon open Six Car Pub & Brewery, a downtown restaurant on Polk Street.