Where to Find the Best Chargrilled Rib-Eye in Fayette County

Get a steak, mail a letter, and revel in history at Murphy’s 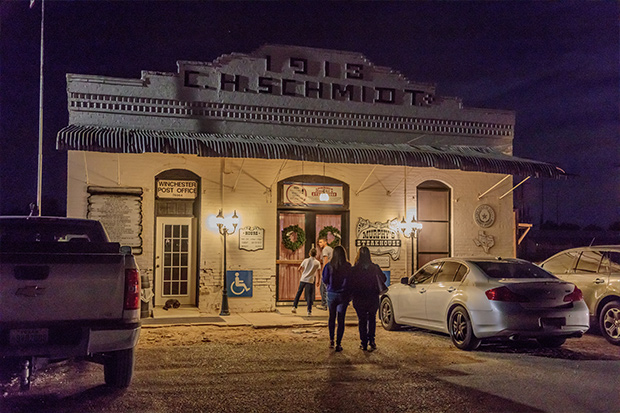 In a 1913 building that once served as Winchester’s mercantile, fabulous rib-eyes and other specialities await.

There’s not much to do in Winchester, population 50, on the western lip of Fayette County. So when someone in neighboring Bastrop or Lee Counties says, “Let’s go to Winchester,” they’re talking about eating at Murphy’s Steakhouse. 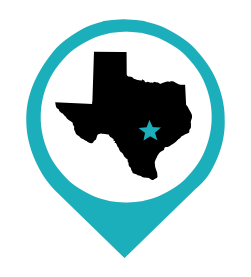 It’s fine dining, country-style, with an old Western look and a chargrilled rib-eye steak that’s to drive for. And you can mail a package from there, too, as the steakhouse’s co-owner and manager, Georgianna Fox-Orona, is also Winchester’s postmaster. If you open the wrong door to enter the building on Thomas Street, constructed in 1913 by German immigrant C.H. Schmidt, you’ll be facing a wall of post office boxes.

Go in the other door and you’re at the restaurant’s antique hostess station, which Georgianna bought on eBay 10 years ago for $20. She was so ecstatic when it arrived, she sent the seller in California another $200. “This was exactly what I was looking for,” Georgianna says. “We’re all about preserving history here.” The hostess station is from the early 1900s, and the tin ceiling and exposed brick walls are original to the building. The wooden bar, with a giant mirror backdrop, six original barstools, and a sign prohibiting dancing on tables with spurs, resembles Miss Kitty’s saloon from Gunsmoke.

It’s a rustic, old-fashioned ambiance, but folks drive to Murphy’s for the food, not the décor. All the steaks are hand-cut, so no two are alike. And if you order the 6-ounce, you just might get 8, as the sizes are eyeballed, not weighed. Everything here is done the old-fashioned way.

The steakhouse attracts diners from nearby La Grange, Giddings, and Smithville, but many fans drive from hours away.

In 2004, Georgianna was working for a petroleum services company with Prince “Boykie” Murphy, who owned the restaurant with his wife, Sherry, but had been thinking of selling it. A waitress as a 15-year-old in Rockdale, with two decades of restaurant jobs to follow, Georgianna had long dreamed of owning her own eatery. She told Murphy she was interested but first had to talk to her boyfriend, Richard Orona. “I was persistent and he finally gave in,” she says. The couple took another plunge together when they married in 2015, after 25 years together.

Schmidt opened the building just before World War I as a shoemaker’s shop, but he gradually added food items and other necessities, including cheese and crackers, sausage, sardines, a pickle barrel, and dry goods. “He even sold coffins,” Georgianna says. Winchester prospered in the early 20th century when cotton was king, so Schmidt’s shop grew into the town’s general store. After Schmidt died in 1921, the store was passed down to his daughter Hattie and her husband, M.V. Harris, and it thrived for five decades as Harris General Merchandise Store. The Murphy family bought the building in the 1970s and in 1995 renamed it Murphy’s Steakhouse, though they still sold merchandise.

Place steak in a sealable container. Mix olive oil, rosemary, thyme, and garlic together, then pour over steak to marinate an hour or longer. Heat grill pan over medium-high heat. Sprinkle steak evenly with salt. Place on pan and sear five minutes without
moving steak. Flip and repeat on other side. Add fresh lemon juice and pepper to taste. Serve.

When Georgianna and Richard took over in 2005, they cleared out the merchandise and dedicated the space to food service. “We’ve had to expand the kitchen six times just to keep up with the demand,” Georgianna says. Making food the one and only priority was a smart move. On weekends, the 29 tables fill up rapidly, though on weekdays there’s rarely a wait. The steakhouse attracts diners from nearby La Grange, Giddings, and Smithville, but many fans drive from hours away. If you’re going from Austin to Houston, or vice versa, the steakhouse is just a 10-mile detour off State Highway 71.

It’s only a matter of time before The Food Network discovers Murphy’s, as if Georgianna and her crew aren’t busy enough. But there’s always time for a post office customer. “They come into the steakhouse and track me down!” she says with a laugh. But she complies because, while Murphy’s may put Winchester on the map figuratively, the post office does that literally.

Mail has always been important in Winchester (est. 1851), where the townsfolk used to go down to the depot and wait for the “Dinky” (a two-car train on the San Antonio and Aransas Pass Railroad) to bring the day’s post. Locals say you could set your watch according to that train, which served the town until 1949.

Things still sometimes move at that old-timey pace at Murphy’s, where everything is made to order. Service is rarely fast, especially when a group of motorcyclists shows up en masse on a Saturday afternoon. Your growling stomach will appreciate the bountiful salad bar with a kettle of savory pinto beans, which is included in most orders. You can also order the salad bar
á la carte ($4.99 for one trip or $6.99 for all you can eat).

Murphy’s has won multiple accolades, including Best Overall Restaurant, in The Fayette County Record’s 2017 restaurant awards. Customers and critics alike love its wide menu, which features everything from fried oysters and cheeseburgers to pastas and blackened catfish. But if you’ve come this far, why not choose the filet mignon ($22.99)? Have your companion order the gorgeous butterflied jumbo shrimp and share, along with a platter of award-winning onion rings. There are none better in all of Texas—which can also be said for the chicken-fried steak, which comes in small and large sizes, though the menu really should say “huge” and “I’m-gonna-have-to-take-the-rest-to-go.” Murphy’s goes through a lot of Styrofoam for a town of 50.

Room for dessert? That’s a good one, but temptation is strong with the delicious homemade pies, banana pudding, and molten chocolate cake, whose thick liquid center oozes out like lava. If you’re craving ice cream, Georgianna and Richard’s Winchester Depot and Ice Cream Junction is right around the corner at 211 Front St.

What more does Winchester need? Maybe a health club to help diners work off all that delicious goodness!