Legendary pitmaster C.B. Stubblefield, who owned restaurants in Lubbock and Austin, receives his due 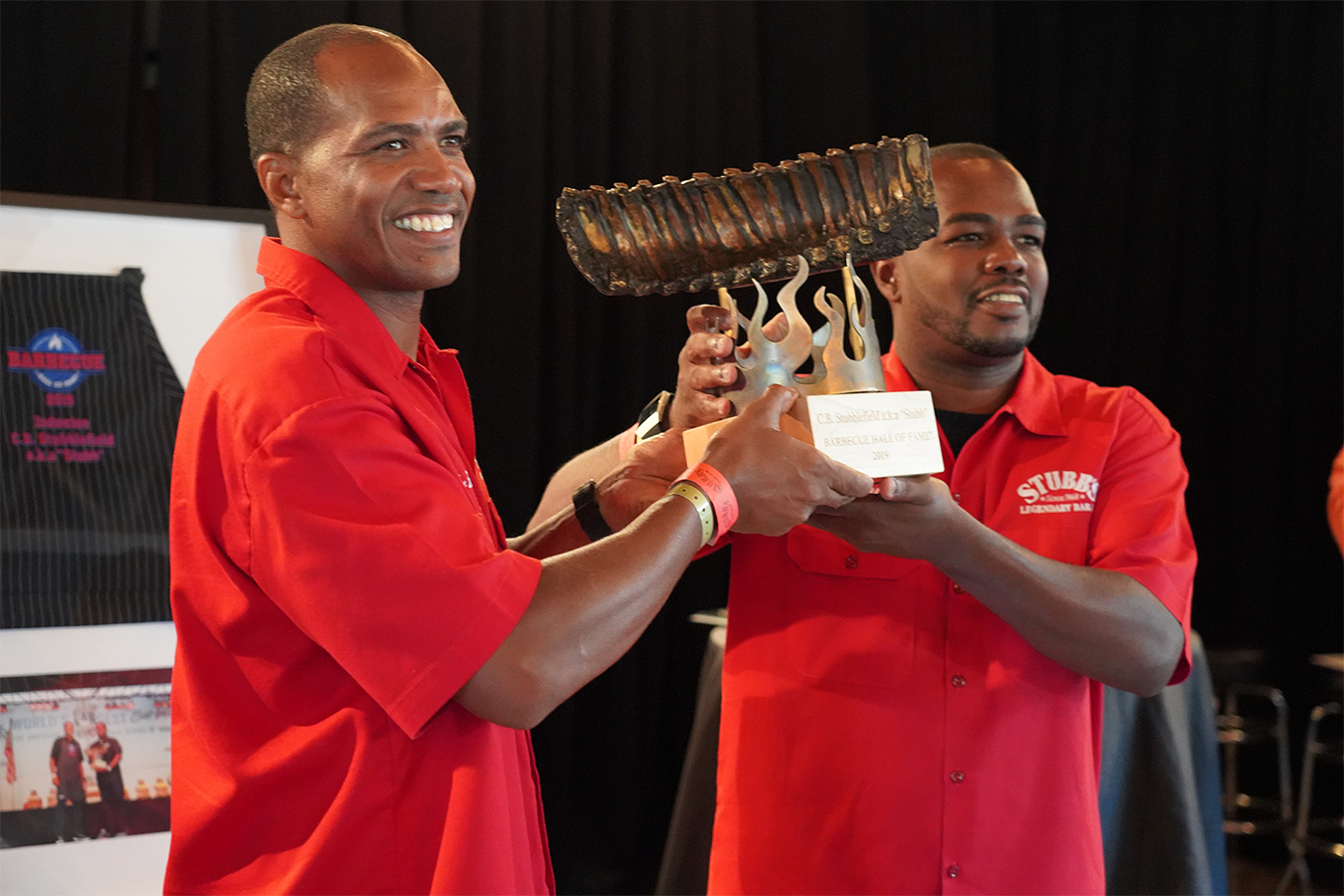 Rocky and Reggie Stubblefield show off the 2019 Barbecue Hall of Fame trophy presented to them on behalf of their grandfather C.B. “Stubb” Stubblefield.

While today’s top pitmasters have achieved a degree of celebrity formerly reserved for, well, celebrities, the late C.B. “Stubb” Stubblefield was ahead of his time. With his cowboy hat and megawatt, gap-tooth grin, the barbecue legend exuded star quality, whether stirring up a batch of his world-renowned sauce or introducing top-tier bands at his eponymous restaurants.

On Sept. 14, Stubb became the first Central Texas pitmaster to be inducted into the Kansas City-based American Royal Barbecue Hall of Fame. “The award exists to recognize, document, and preserve the heritage of barbecue worldwide,” Marketing Director Emily Park says. “Stubbs’ contributions include his sauce, restaurants, and ability to unite the cultures of barbecue and music.”

The pitmaster’s grandsons, Rocky and Reggie Stubblefield, who serve as brand ambassadors for Stubb’s Bar-B-Q products, accepted a bronze rack of ribs in his honor and celebrated the induction at a ceremony at Stubb’s Bar-B-Q in Austin. Mayor Stephen Adler proclaimed Oct. 1 “C.B. Stubblefield Day.”

Stubb was born in Navasota in 1931 as one of 12 children. His family relocated to Lubbock to pick cotton, but his father was also a Baptist evangelist preacher. Singing in the choir sparked a lifelong love of music for Stubb, and he learned to cook by helping with church functions. He worked at local restaurants and hotels before joining the 96th Field Artillery Battalion, the Korean War’s last all-black army infantry. After serving as staff sergeant and gunner, he was honorably discharged and received two Purple Hearts.

It was in the army that Stubb honed his culinary chops, cooking for up to 10,000 soldiers a day. In 1968, he opened Stubb’s Legendary Bar-B-Q in a tiny stucco building in Lubbock and built a hickory pit out back. Stubblefield’s hospitality and cheerful demeanor were as much a part of the experience as his ribs and signature sauce, which was sold out of old Jack Daniel’s bottles corked with a jalapeño. The jukebox boasted the best blues in town, and the most famous musicians of the day, from Lubbock native Joe Ely to Johnny Cash, Muddy Waters and Stevie Ray Vaughn, played inside the 75-seat venue.

Stubb’s grandsons have their own indelible memories of their ‘Peepaw.’ “As kids, we’d spend summers with our grandparents. He’d come home from a long day at work and have us pull his boots off—we’d be tugging and yanking; I’m sure he made it harder than it really was,” Rocky says. “Near the end of his life, I helped him remove his boots one time after work and he told me, ‘Always take care of your feet.’ That’s some great business advice, right there.”

A series of unfortunate incidents led to the closure of Stubb’s in 1985, and it was close friend Ely—by then living in Austin—who convinced Stubb to start fresh in a new environment. A year later, Stubb’s Bar-B-Q opened in Northeast Austin. In 1992, following an appearance on Late Night with David Letterman, his sauce hit the national retail market. Seven years later, Stubb’s sauces, marinades, and rubs went international.

Before he passed away in 1995, Stubb was actively involved with converting a deserted lot he referred to as, “Hell’s half-acre,” into a world-class music venue and restaurant. Stubb’s Bar-B-Q moved to its current Red River Street location in Austin in 1996—everyone from Willie Nelson and Snoop Dogg to Lady Gaga and Metallica has headlined there.

Despite his fame, Stubb never changed. “Making people happy was his main goal, his pride and joy,” Rocky says. “He was humble. He’d be so honored by this award, but what he truly loved was talking to folks.”