At Austin’s Curtain Theatre, the Stage Is Set for Its First Show Since the Pandemic 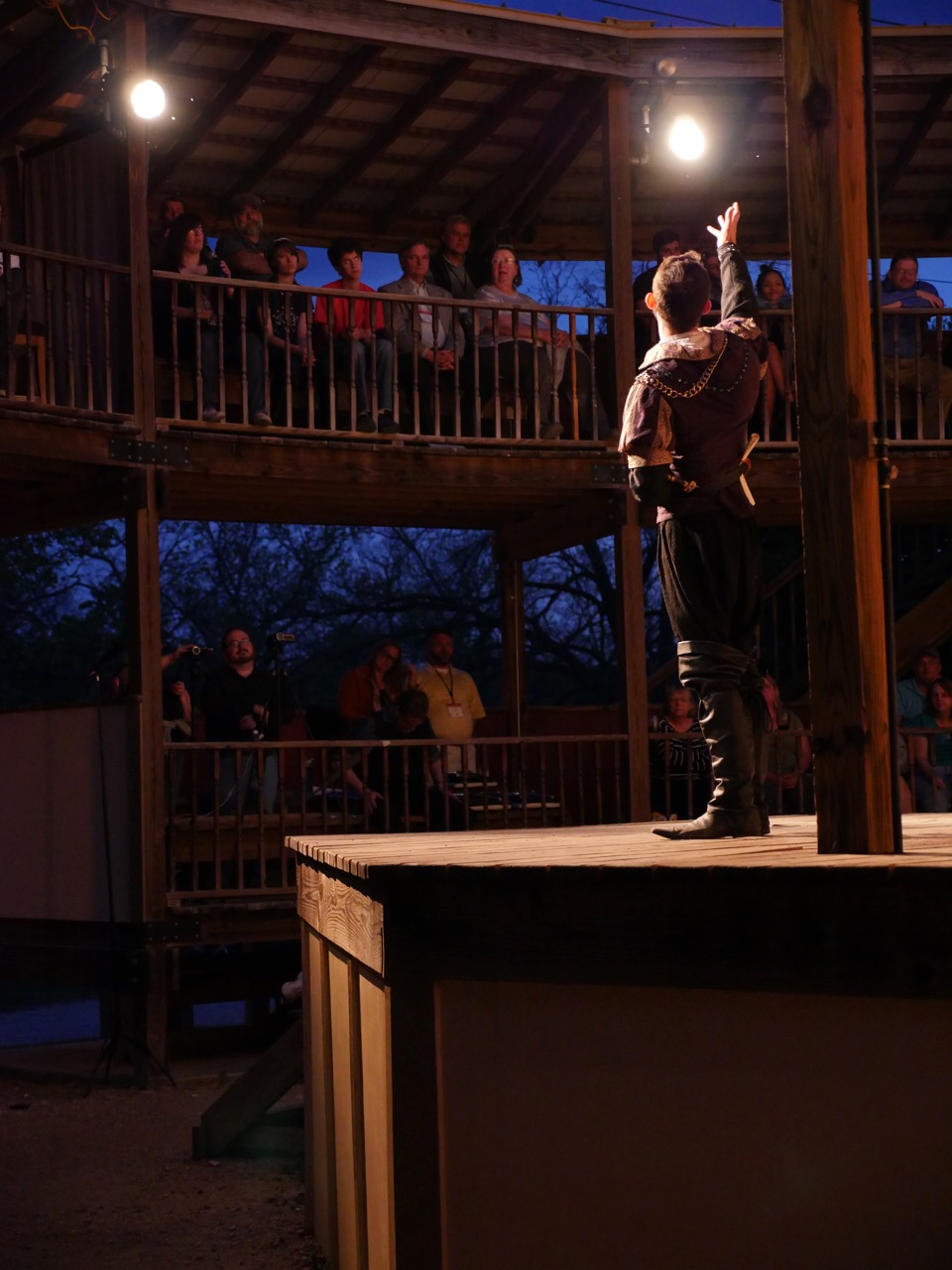 A view for the Curtain Theatre from the stage. Photo courtesy of the Baron’s Men.

It’s a few days before opening night of the Baron’s Men’s production of The Tempest, and the cast and crew are rehearsing the first scene of the fantastical Shakespeare comedy. A challenge for any production, the scene involves a shipwreck, caused by a storm magically conjured up by Prospero, the exiled Duke of Milan. The shipwreck leaves members of the royal court of Naples stranded on an island as Prospero seeks his revenge.

Under the watchful eye of director Lindsay Palinsky, the actors work out the tossing and turning of the boat, in this case a V-shaped DIY contraption that simulates the bow of a ship. With the royal court and ship crew swaying inside the boat, two actors playing mischievous sprites rock the boat back and forth to create the effect of stormy seas.

Palinsky gives the cue for the actor portraying the Boatswain to start running through her lines. “Hey, my hearts! Cheerly, cheerly, my hearts! Take in the topsail. Tend to the master’s whistle. Blow till thou burst they wind, if room enough!”

As the swaying and tipping of the boat increases, the suspense builds until the scene reaches its climactic moment. The action comes to a halt, and the actors assess where they need to be positioned.

“It’s a very difficult scene to pull off,” says musician Josh Kavanaugh, who watches the rehearsal before accompanying the scene with acoustic guitar music. “It makes you wonder how it was done in Shakespeare’s time. I mean, this is obviously not very high-tech, but they didn’t have access to anything. We have nice blue lights to make it look like the ocean.”

Creatively executing scenes like this comes with the territory of being an all-volunteer, not-for-profit acting troupe in Austin. But the Baron’s Men have an even more unique challenge: their home venue is the Curtain Theatre.

A replica of London’s original Globe Theatre, the Curtain is located on the Northwest Austin property of eccentric video game entrepreneur Richard Garriott. The Baron’s Men have been performing at this venue and helping out with its upkeep for 15 years. This month, their 2021 season gets underway with The Tempest (performances are April 22-May 8), followed by a fall production of A Midsummer Night’s Dream (Oct. 1-23).

This is the first time the group has been able to perform since the pandemic forced them to cancel their season last year. “We closed MacBeth in late 2019 and there have been no performances in this space since then,” Palinsky says. As far as she knows, The Tempest will be the first COVID-safe theatrical performance in a theater in Austin since the pandemic started.

Like the Globe, the Curtain is round with bench seating and no roof, and it sits by a body of water (instead of the Thames, it’s by Lake Austin). It also has a thrust stage, where the stage extends out like a platform, allowing audience seating on three sides. Unlike the historic theater, it has no walls. Because of its open-air design, the troupe has to deal with all kinds of elements, from hailstorms to curious critters to loud music blasting from the occasional party boat on the lake.

“We’ve had mice, wasps, and even ring-tailed cats,” says Palinsky, describing how a family of ring-tailed cats once took up residence in “the heavens,” the part of the ceiling that overhangs the stage where props can be lowered and raised. “During one show, every night a cat would make an appearance, climbing down the pole onto the stage. We’d stop the show and watch the cat go off for hunts at night.”

When it rains, performances stop. The audience can remain seated because the two levels of seating are covered. The actors tend to wait backstage or under the ceiling overhanging the stage. When the rain stops, the brooms come out, stagehands sweep the stage, and the show goes on.

Garriott built the theater in 2006 after visiting the reconstructed Globe in London. The Curtain is about a third of the size of that historic theater, and it resides on the 69-acre property that the gaming magnate uses for “his playground,” as Kavanaugh describes it, pointing to an area further down the lake where he says Garriott has a pirate ship. (Five years ago, the property became the most expensive ever put on the market in Austin at $45 million. In 2019, Garriott requested the property be sold through bitcoin. He remains the owner.)

A member of the Society for Anarchronistic Creativity, an international group known for its enthusiasm for Medieval European culture, Garriott started asking theater groups to perform at the Curtain, including Austin Shakespeare, known locally for presenting free Shakespeare in the city’s Zilker Park. Eventually, the Baron’s Men became its primary theater company, while Austin Shakespeare continues to offer summer theater camps for children at the space. Garriott also hosts an annual jousting tournament, Lysts on the Lake, in the parking area for the Curtain. That event takes place on Oct. 8-10. 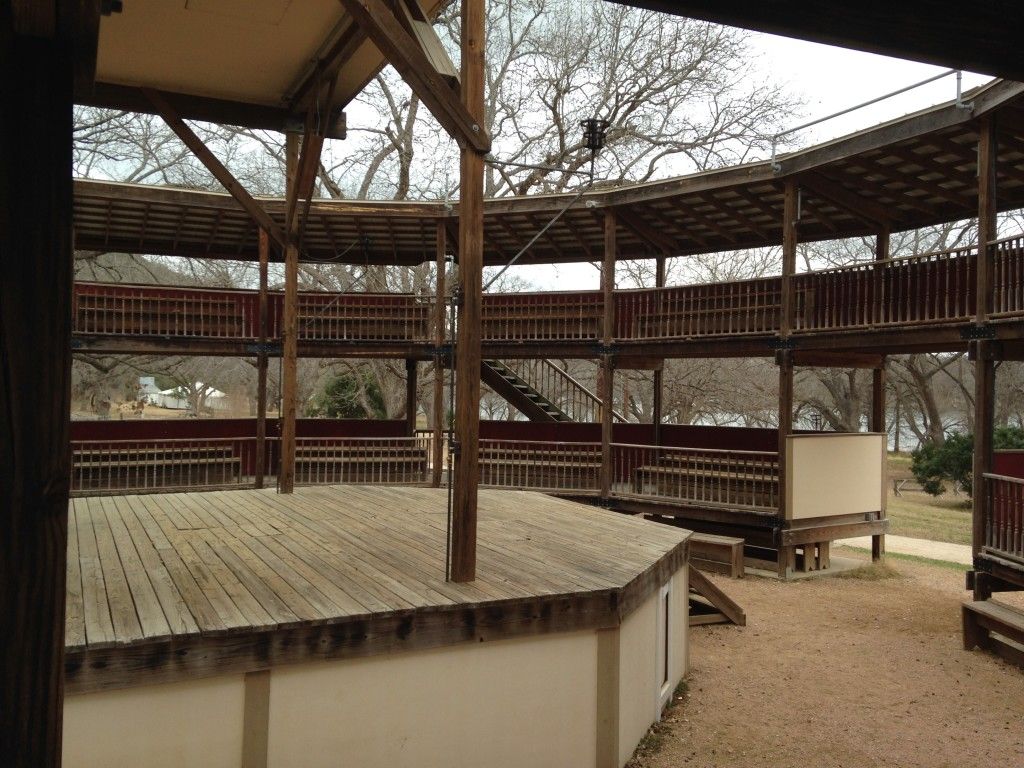 Inside the Curtain Theatre during the day. Photo courtesy of the Baron’s Men.

For many of the actors, the Curtain is the first experience they’ve had performing in a space with 280 degrees of audience. Longtime Baron’s Men performer Aaron Niemuth says it took some getting used to having his back to audience members at times. “When you’re emoting, you kind of have to do it like in a half circle to be sure that as much of the audience as possible can see what you are doing and how you’re reacting,” he says.

Audiences are also within 25 feet of the stage, sometimes closer if in the Groundlings area, located directly in front of the stage. “That’s one of the most rewarding things for acting on that kind of stage, the closeness of the audience,” Niemuth says. “With that venue, you really get to connect with your audience very well and very easily.”

In the tradition of Elizabethan theater, which is the period of English theater between 1558 and 1642, audiences would interact with the performers onstage, often cheering for the good guys, hissing at the villains, and throwing rotten food whenever they felt like it. The Baron’s Men encourage the same behavior, only not to the extreme of Elizabethan theatergoers. Some over-zealous fans have thrown pennies at the curtain call, to pay the actors like they did 400 years ago, and sometimes Shakespeare lovers say the lines along with the actors. But it never gets too out of hand. For audience members like Inge Rider, you just have to go with the flow. “It’s always an adventure,” she says.

Rider estimates she’s been to about 35 Baron’s Men’s shows. She enjoys the booing and hissing (“That’s totally different from regular theater, [where] you just sit there quietly and watch the show,” she says) and revels at the quality of the productions, particularly the costumes. “When you think about the Elizabethan times, they had all those layers and the fancy fabrics, so the Baron’s Men’s costumes kind of go with that and it’s really impressive.”

Costumer for The Tempest, Liegh Toland, says her go-to source for achieving the look of the period is upholstery fabric. And even though the company schedules performances in the spring and fall to avoid Texas’ extreme heat, it can be tricky. “We do have a lot of historical costumes where you actually have to physically wear the layers to make it work,” she says. “In recent years, we’ve been very conscientious about trying to fake it, where it still looks good but not causing heatstroke to our actors.” (Next up for Toland will be directing the company’s fall show of Midsummer.)

Because the theater sits near the lake, there’s often a nice breeze to cool things down. Sometimes it can be downright chilly, Rider says. She recommends bringing a jacket or blanket and, if you have one, a stadium seat, because the benches don’t have backs to them. “You can bring your own or you can rent them there for a $1,” she says. “They also have blankets in the fall that you can rent, so the Baron’s Men make sure that you’re comfortable.”

This year, to make it safe for audiences, capacity of the theater has been cut by more than half, from about 300 to 120. It’s the first time they’ve had to do assigned seating, and tickets are being sold for “pods,” where two to four ticketholders sit together and the pods are spaced out around the theater. Audience members will be asked to wear masks as they move about the space, and people are allowed to take off masks in their pods while eating and drinking. It helps, too, that it’s an open-air space.

According to Kavanaugh, all the precautions they’ve had to take are nothing new to the Baron’s Men. “It’s not too far out of our normal creative wheelhouse,” he says. But it wouldn’t work if audiences and the cast and crew weren’t ready to come back. “Everyone is kind of nervous about this stuff, I guess. But nobody would be here if they didn’t want to be and didn’t really want to get back into doing this kind of stuff. I think it’s going to work out pretty well.”

On that note, he rushes off to rehearse. After all, there’s a storm to conjure.

The Curtain Theatre is located at 7400 Coldwater Canyon Drive in Austin (look for the wooden signs that point you in the direction of the theater and Castledon Village). Tickets are available for The Tempest here.