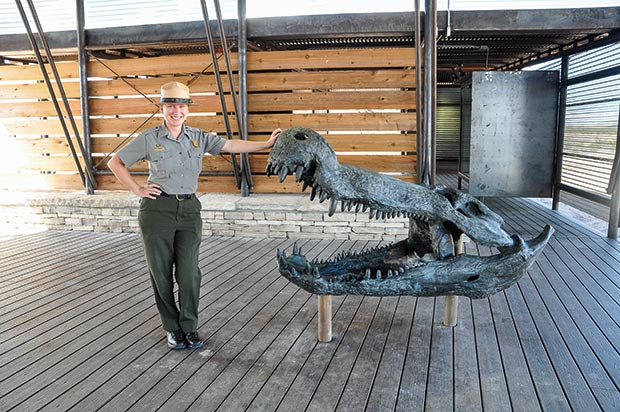 Big Bend National Park contains a fascinating collection of fossils. For a long time, the park had no specialized display to provide information to visitors. That will change with the Jan. 14, 2017 grand-opening celebration of the park’s new Fossil Discovery Exhibit.

The exhibit was completed as a “centennial challenge,” a government initiative that encouraged public-private partnerships on signature projects in national parks to celebrate the NPS’s 100th anniversary in 2016. The national park and Big Bend Conservancy partnered to build the exhibit, which will explore the area’s paleontological and geological past in a $1.35 million open-air pavilion about 20 miles inside the park from the U.S. 385 entrance.

The pavilion’s two side rooms will provide self-guided interpretation of the park’s four historic environments—marine, coastal plain, inland floodplain and volcanic highlands—and flank a classroom in the center. The exhibit rooms will contain life-size replicas of fossils found within Big Bend, including the park’s most recent dinosaur discovery—the skull of a Bravoceratops polyphemus—which, for the near future, can only be seen here. The rooms also will feature illustrations, diagrams and text connecting the fossils with geological formations visible from the site.

A replica skeleton of a pterosaur Quetzalcoatlus, the largest flying creature ever found, will hang from the ceiling of the classroom, where visitors will gather for presentations, such as a ranger-led discussion of the exhibits, and learn about new finds. In addition, a new website is being developed that will share information on findings and research.

“We’re working hard to make this a place families can enjoy together,” says Courtney Lyons-Garcia, with the Big Bend Conservancy, noting that the exhibit may draw visitors who aren’t avid hikers and campers, and that it can inspire greater exploration of the park.