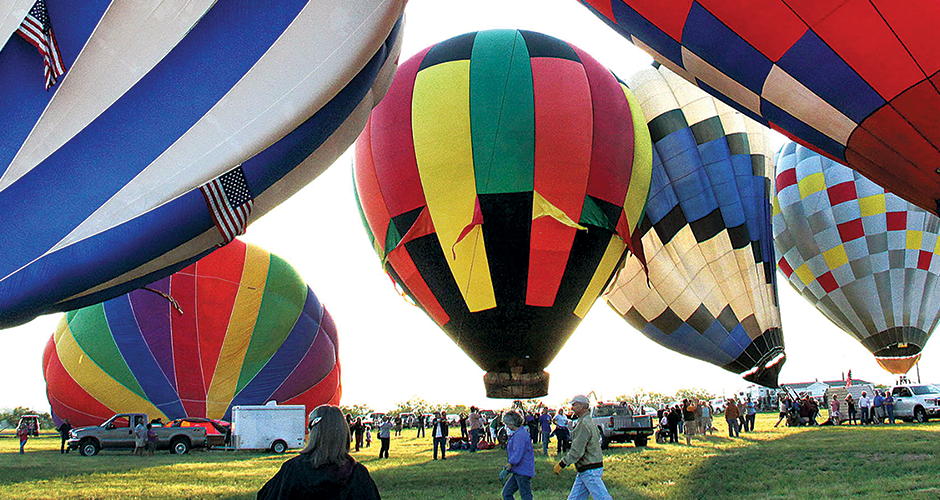 Don’t let the still, ancient expanses of the Chihuahuan Desert fool you—there’s a lot happening out here, from cultured art festivals to white-knuckle car racing. You just have to know where and when to look. In Alpine, that might mean watching the skies for a colorful, high-flying balloon festival on Labor Day weekend; or in Terlingua, following your nose to its storied chili and black-eyed pea cook-offs. Try any (or all!) of these annual festivals—by no means the only events going on in this part of the state—to get in on the far West Texas fun.

The majestic, yet austere, landscape of West Texas has long called to creative types. To Stewart Ramser, who heeded that call over the years with regular visits from Austin and eventually a home in Alpine, an annual music event seemed likea natural fit for the area—so he founded the Viva Big Bend Music Festival in 2012.

“We realized that a lot of musicians like to come out here, and there are a lot of great venues,” says Stewart, who also serves as tourism director for the City of Alpine and publisher of Texas Music magazine. Last year’s festival attracted about 55 musical acts to play in Alpine, Marfa, Marathon, and Fort Davis. The four-day lineup also includes children’s entertainment, music workshops, and an exhibit of musicians’ artwork. Four-day passes to this year’s Viva Big Bend Music Festival, July 24-27, can be purchased at www.vivabigbend.com.

Ramser says the festival’s growth may bring more bands and venues in coming years, but the goal is to let people experience the culture of the Big Bend, not create a sprawling mega-festival. “The local communities have gotten behind us in a big way,” he says. “It’s about highlighting what this area has for a wider audience.”

That same philosophy is what brought a second part of Viva Big Bend, a food festival, to fruition in April 2013. Showcasing the region’s cuisine from food trucks to fine dining, the three-day event treated attendees to cooking tips from chef Monica Pope of Houston, culinary demonstrations, food and drink tastings, and an insider’s view of how goat cheese is made at the Marfa Maid dairy. An expanded menu of events and activities is stirring for the festival’s second year, April 10-12. Find information about tickets at www.vivabigbend.com. 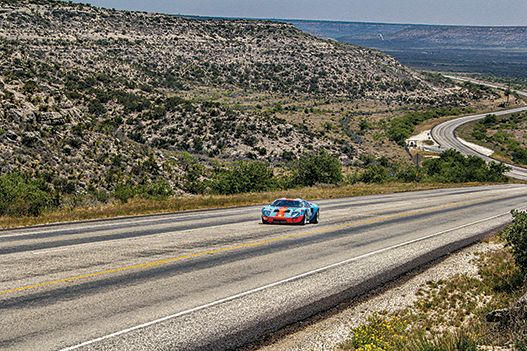 If you’ve ever wondered what it would be like to blaze across the wide expanses of West Texas at top speed, there’s a legal way to find out: Each April, the Big Bend Open Road Race gives car-racing enthusiasts a shot at posting their best time on US 285 between Fort Stockton and Sanderson, with top racers regularly breaking 200 mph.

It’s the most challenging open-road race in the nation and the biggest event of the year for both cities, says Kenda Furman-Belardo, a coordinator of the race since 2002. The supercharged competition has become an annual tradition for hundreds of racers and volunteers, along with car clubs and several generations of families from all over the nation.

Almost anyone (and any car) can enter, but the rules are strict, and rookies have to complete training and a qualifying run before getting behind the wheel on race day. Depending on how much safety equipment and experience they have, drivers can compete in one of six divisions from “street rod” up to “unlimited”—the only category of racers allowed to go as fast as they dare. Last year’s winner, Tom Whalen of Frisco, made the 118-mile round-trip in about 41 minutes in a red 2002 Corvette.

On race day, speed demons launch themselves one by one down the ribbon of highway from Fort Stockton to Sanderson and back again, winding through 59 curves and elevation changes each way. Shiny Mustangs, Camaros, and Corvettes are common, but classic muscle cars and even a Lamborghini or Ferrari might rip through the course, too. There’s no shame in bringing more humble vehicles up to the starting line, either—racers have competed in souped-up station wagons and even a tow truck (after one driver’s car broke down before the main event).

Spectators aren’t allowed to watch the race from the highway, so your best chance to see these road machines up close is to get a coveted volunteer spot on the course or just be in town during race week. Sanderson hosts a welcome party and race preparations; then most of the action moves to Fort Stockton with a parade, car show, and the final awards banquet. Visit www.bborr.com for details on this year’s event.

Hearing the roar of the burners as they inflate hot-air balloons, then watching the vibrant orbs float into the sky is an amazing experience and worth getting up early to see. The Big Bend Balloon Bash offers a spectacle of balloon lift-offs each morning during Labor Day weekend at the Alpine-Casparis Municipal Airport.

“It is a great time of the year to be out there and close out the summer,” says Alpine Tourism Director Stewart Ramser. “The scenery is dramatic with the mountains and the colorful balloons going up.”

Organized in 1987, the event usually draws more than a dozen colorful balloons and thousands of spectators. If the conditions are just right and the winds are not too high, balloons will take off around 7:30 a.m. on Saturday, Sunday, and Monday and fly for several hours.

Once the balloons depart for their flights, spectators can visit the vendor area for food and shopping. During the afternoons, visitors have time to check out area attractions and might even want to travel to the Marfa Lights Festival in Marfa, just 28 miles west (see page 60) .

On Sunday evening, enjoy the show at the Fire Concert and Balloon Glow at Buck Stadium. For the balloon glow, the burners are fired, lighting up the balloons with a brilliant display of color. Call 432/837-7486; https://bigbendballoonbash.com.

Marfa is known for an unexplained phenomenon that takes place after sunset, when mysterious lights occasionally appear in the desert east of town. While the lights are viewable year-round, the festival named for them only appears once each year—Labor Day weekend.

The event promises lots of family fun, beginning Friday with musicians playing and food and craft vendors opening their booths on the Presidio County Courthouse lawn.

On Saturday, visitors can participate in a 5K walk/run or sit back and watch the parade, which starts at Marfa High School and travels along Highland Avenue.

Local and regional musicians and dance groups perform throughout the weekend with the headliner performing Saturday. Last year, the festival partnered with Marfa Ballroom to bring in AJ Castillo. While this year’s band isn’t confirmed, organizers aim for danceable music that fits in well with the family environment.

Fest-goers are encouraged to book their accommodations early, as the area fills up with visitors. Call 432/729-4942; www.marfacc.com/todo/marfalightsfest.php.

When writer Frank X. Tolbert and publicist Tom Tierney decided in 1967 to hold a chili cook-off in one of the most remote places in the state—the Terlingua Ghost Town—Tolbert didn’t expect a lot of people to show up. The first event, pitting humorist H. Allen Smith against chili cook Wick Fowler, drew more spectators than expected and ended in a draw, but it proved to be a provocative start.

Since then, thousands of cooks and onlookers have made the annual trek to Terlingua for the first Saturday in November. In 1983, the cook-off split into the Chili Appreciation Society International’s CASI Terlingua International Chili Championship and the Frank X. Tolbert-Wick Fowler International Original Terlingua Championship Chili Cookoff.

“People come from all over,” says Kathleen Tolbert Ryan, Frank’s daughter and president of the Tolbert-Fowler Championship Chili Cookoff. “It’s fun to see them pouring into the town.”

Both events have grown over the years. The Tolbert-Fowler event, held behind the Terlingua Store at FM 170 and South County Road, begins on Thursday, October 30, with an Ugly Hat Contest and Last-Chance Cookoff, which is a qualifying event. The other days include music and other competitions in salsa, barbecue, and margaritas that have been added over the years.

“We’re always trying to make it a better event and keep it going,” Kathleen says.

“This is a cross between the great-est collection of chili cooks and the world’s best party,” says Kris Hudspeth, CASI public relations director. “You will make lifelong friends and memories of a lifetime.”

The chili cook-offs have spurred other Terlingua events. The Black-Eyed Pea Off began on New Year’s Day in 1990 to give area visitors something to do on the holiday.

Though the Pea Off started as a fun poke at the seriousness of the chili cook-offs (the event only has two rules: Have fun and no beans), it had a similar beginning, starting with two competitors, Pea Off founder Pam Ware and musician Tommy X. Hancock, and ending in a draw. The cooks turn in their black-eyed peas at 2 p.m. on the porch of the Terlingua Trading Company, then everyone enjoys food and music until the winners are announced at 4 p.m. This event benefits local youth and the community.

“We have the best party of the year and start out the year right,” Pam says.

Just half an hour from the buzz of Marfa’s contemporary art scene, Alpine has long had a thriving creative community of its own. Once a year, it spills out onto the streets in grand fashion during the Alpine Artwalk, held on the Friday and Saturday before Thanksgiving.

Since local artists and six galleries banded together to host their first “Gallery Night” in 1994, the event has grown into an annual institution that features art in dozens of venues, from galleries to temporary studios in local businesses. There’s also a popular live-music lineup, a parade at noon Saturday, an art auction, and outdoor markets serving up food and handmade crafts.

The center of activity is downtown along Holland Avenue and Fifth Street—if you take a stroll through the area, be sure to check out the new work at that corner by muralist Stylle Read, painted last year with the help of local artists to mark Artwalk’s 20th anniversary. The adjacent Alpine postcard mural also makes a great photo op for visitors to picture themselves in the colorful local art scene.