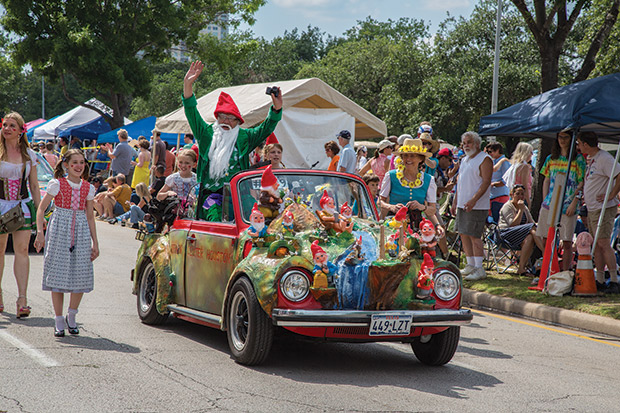 Three decades ago, a wacky and wonderful parade first hit Houston’s streets: the Art Car Parade. At the time it featured 40 artfully decorated cars and drew a crowd of around 2,000. Over the years, the parade, organized by the Orange Show, has evolved into a formidable celebration of Houston and the marriage of auto-engineering and free-form artistic design.

On April 6–9, this once-niche event now expects to meet with a crowd of around 250,000 attendees, with about 250 art cars driving in from across the country. The parade has become an annual party the whole city looks forward to, as it shuts down downtown Houston’s Smith Street and City Hall just for the parade route and supporting festivities throughout the weekend.

The celebration this year begins on Thursday with the public unveiling of the 2016 Reagan High School Art Car “Bohemian Rhapsody”—a tribute to the band Queen. On Friday, revelers change into their craziest costumes for a spirited night of fun at the Art Car Ball. The parade itself rolls on Saturday at 2 p.m., and the event wraps up Sunday with an awards ceremony, where a panel of judges grant more than $20,000 in cash prizes.