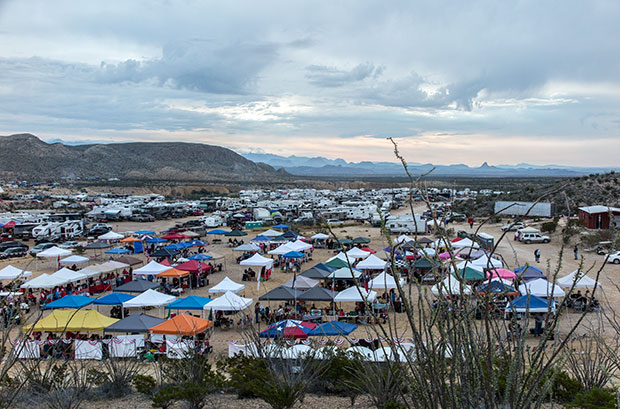 The Big Bend feeder town of Terlingua is no ghost town the first weekend in November. That’s because every year for half a century, the former mining outpost has hosted up to 20,000 chiliheads vying to help crown the year’s best chili con carne. It all began in 1967 as a cookoff between two chili aficionados: Wick Fowler of the Chili Appreciation Society International, and H. Allen Smith, a former New Yorker who had published a magazine article titled, “Nobody Knows More About Chili Than I Do.” As the legend goes, the two men tied (despite Smith’s use of beans in his recipe—an abomination by Texas standards), and so began the tradition of returning to the west Texas desert each year. Today, hundreds of chili cooks compete all year in order to obtain an invitation to compete in Terlingua Nov. 1-4. The cookoff splintered into two festivals in 1983: the Original Terlingua International Championship Chili Cookoff and the Terlingua International Chili Championship, held concurrently on the same weekend, just a few miles apart, so now—in addition to arguing about who makes the best bowl of chili—attendees can argue about which cookoff is better. Regular attendees get in the spirit all week long by camping in tents and RVs, and enjoying live music nightly.