Going to the Chappell 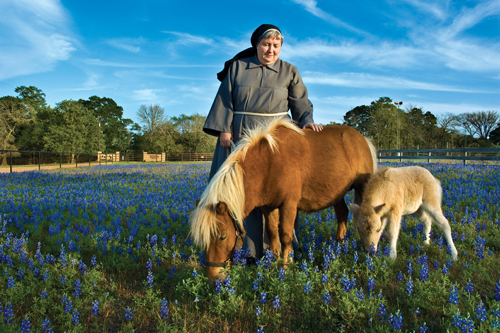 “They are just like people,” says Sister Angela of the miniature horses bred on the Franciscan Poor Clare Nuns’ farm north of Chappell Hill. “Each one has its own personality.”

I’m standing alone in downtown Chappell Hill at twilight, watching the sky deepen to a cobalt blue. There are no sidewalks here, and the wooden planks that form the path in front of me are worn smooth with decades of use. The storefronts and the bank on Main Street date to the mid-1800s, so the Old West feel is for real. Across the street, a lone shopkeeper stocks her shelves as darkness begins to envelop the old buildings.

This time of day, it’s easy to imagine Chappell Hill 150 years ago. The town was laid out in 1847 by trader’s-wife-turned-developer Mary Hargrove Haller, who named it for her grandfather, Robert Wooding Chappell. Situated in the midst of some of the richest farmland in Texas, the town grew rapidly into a bustling trade and distribution center. Cotton was king here until the Civil War and a yellow fever epidemic changed things forever. The town didn’t disappear exactly, but it never again thrived as a commercial center. Instead, it has found its niche as a historic village offering respite from the busy pace of nearby Houston.

The folks who call Chappell Hill home like the historic vibe just fine. I slip inside a shop called the Bluebonnet House, and I’m amazed at the lovely linens, quilts, jewelry, dishes, candles, and other items displayed in every nook and cranny. Owner Dale Ramey tells me that the building once housed a grocery and a saloon. “Actually, Chappell Hill had 18 saloons at one time,” Ramey says. “It was a rockin’ town.”

Revelry is more seasonal now and family-friendly. In spring, the rolling hills turn blue with bluebonnets, and in April, Chappell Hill celebrates the state flower with a festival that attracts thousands. In July, there’s an old-fashioned Independence Day parade; October brings fall foliage and a colorful burst of scarecrow displays; and a home tour in December affords an insider’s peek at some of Chappell Hill’s restored historic homes.

A Greek Revival hotel that once belonged to Mary Haller is now an inviting B&B called the Stagecoach Inn. We arrive via a more modern vehicle one morning to meet owners Eileen and Steve Evans for a tour. The couple lives in the old inn, and guests stay in either the Coach House, a one-bedroom cottage with a red shingle roof, or in the historic Weems House. The latter, built of cypress clapboard in 1866, was moved to its present site from nearby Church Street. The Evanses also run an antiques shop in the Weems House, displaying 18th-Century pieces from New England in living- and dining-room settings. Serious antiques lovers can book an overnight stay in an antiques furnished bedroom here-the ultimate version of “shop ‘ti! you drop.”

Virgil and I are curious to learn more about local history, and so we head to the Chappell Hill Historical Society Museum. The museum occupies a 1927 red brick building that served as the town’s public school until 1965. One of our favorite exhibits is a schoolroom arranged as it might have been 80 years ago: Orderly rows of wooden desks await students, a bare chalkboard stands ready to be inscribed with the day’s lessons, and a flag and framed print of George Washington grace one corner. Other exhibits focus on the importance of cotton to the town’s economy, the impact of the Civil War, the town’s African-American and Polish communities, and the two colleges that once operated here.

We spy a painting in the hallway- an oil-on-masonite work depicting a bustling day at a rural Texas 1950s cotton gin, with pickup trucks hauling trailers loaded with fuzzy white bales and workers unloading the crop. The artist, folk-art painter Reverend Johnnie Swearingen, grew up in Washington County and painted scenes of the area until his death in 1993. Swearingen presented this scene in bright swirls of red, purple, and green; the crazy-quilt composition and off-kilter perspective create their own kind of reality. The museum owns 60 Swearingen paintings, but most are in storage due to lack of display space. For now, your best bet for seeing the collection is to attend the annual Art Walk in November, when most of it is temporarily on view.

Next, we set out to see another example of local folk art at The Old Rock Store, so named because of its sandstone construction and its former life in the 1870s as a general store. It opens only by appointment (call the museum), but it’s well worth the scheduling effort: Inside, you’ll find two hand-appliqued fabric murals-each six feet tall and 30 feet long-created by talented local women in the 1970s to depict Chappell Hill’s history. We immediately recognize Main Street and other local sites. But we also get a glimpse of the past in appliqued cotton fields, fancy stitched steamboats on the Brazos, and canvas stagecoaches rumbling down satin roads.

A few doors down, we find another view of history at the Chappell Hill Bank, said to be the country’s oldest continuously operating bank still in its original building (circa 1907). The oak-and-brass tellers’ cages and brick-and-masonry vault bear witness to the 100 years of history here, as do the vintage photographs of the town lining the walls.

We’re hungry for more than history now. Since we enjoyed a juicy burger and made-from-scratch onion rings at the Chappell Hill Cafe on a previous visit, we opt for a shared lunch at Bevers Kitchen. Our meatloaf is delicious, accompanied by ham-seasoned green beans, buttery potatoes, and piping-hot yeast rolls. We’re more than satisfied, but the pies look too good to resist. A golden meringue is a perfect foil for the silky-smooth filling of the chocolate pie, while the apple version bursts with chunks of fruit.

We still have a long day ahead of us, but we take a break at the Southern Rose Ranch Bed and Breakfast, our home base for exploring Chappell Hill. Innkeepers Donna and Steve Cummins and their three daughters live in the main house, with guest accommodations in the tin-roofed clapboard cottage behind their home. Our room is the Star Suite, decorated with overstuffed easy chairs, American and Texas flag art, and star-patterned quilts on the beds. Once we’ve rested and recharged here, we’re off to tour the attractions that lie north of Chappell Hill.

Our first stop is the Monastery Miniature Horse Farm, a place I’ve wanted to visit for years. I learned from the monastery’s Web site that this order of Franciscan Poor Clare nuns fled Castro’s Cuba in 1961 and found refuge in Corpus Christi before moving to Chappell Hill in 1984 to raise miniature horses.

We’re greeted by Sister Angela, abbess and head horse wrangler. Because the horses have been selectively bred from the smallest examples of many different breeds since the 17th Century, these tiny animals come in all colors. Some are inquisitive; others eye me indifferently or bolt away at my outstretched hand. “They are just like people;’ Sister Angela says. ”Each one has its own personality!’ All of them, though, seem to know and  love Sister Angela. The youngest horses trot behind her like devoted puppies, nuzzling and nipping at the folds of her long, brown habit, begging for attention and searching for treats.

After saying goodbye to the little horses, we go in search of vintage roses at the Antique Rose Emporium. Here, owner Mike Shoup gives us an introduction to the world of antique roses—many of them descendants of flowering plants that have been around 200 years or more. Antique roses seem to come in an endless variety of colors, shapes, sizes, and scents. Many have been rescued by “rose rustling;’ the practice of cultivating cuttings from roses found along highways and beside abandoned houses. Shoup shows us an example called Highway 290 Pink Buttons, a little shrub rose covered with dime-size pink blooms.

We’re up early on our last day in Chappell Hill to catch the sunrise. Around 9 a.m., Cummins arrives bearing one of her homemade breakfast creations; today it’s cream-cheese- stuffed French toast with strawberries and chocolate-pecan sauce. “I call this my comfort-food breakfast;’ she says with a laugh.

One bite and we agree, adding it to our growing list of Chappell Hill memories that includes welcoming inns, cozy cafes, bluebonnet-covered hills, rustled roses, and little horses tended by gentle women of faith. As we pop the last bite of French toast into our mouths, Cummins reminds us of yet another attraction just up the road and we’re off for more adventures.