The magic sometimes begins as early as February. You're walking along on a gray, winter day, and suddenly you see a flash of color out of the corner of one eye. At first it doesn't register, so accustomed are you to the tone-on-tone landscape, but there it is-a brightly colored blossom on what used to be a bare branch. Soon, you see another bloom, then another one, and the happy realization sinks in: Spring is on the way. 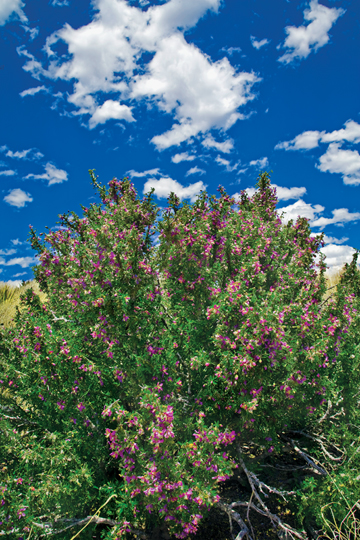 In most parts of Texas, flowering trees are the harbingers of the season—their blooms appear before those of many wildflowers and even before some of the trees themselves leaf out. Most of us merely note the blooms and enjoy the colors, but if you look closely, there’s much more to see. Nature writer and biologist Roland J. Wauer describes the burgeoning glory of several blooming trees in his book Heralds of Spring in Texas (Texas A&M University Press, 1999).

“Few trees display their flowers so well as flowering dogwoods,” he writes. “They often are the only trees in bloom below the Pineywoods canopy, and—because their flowers appear before their leaves, so that their lush greenery does not obscure the flowers—they put on a dazzling show of white blossoms, like bright stars on a dark night … . The blossoms last only a few days before turning a pinkish color and drying up.” Of Texas mountain laurel, which grows throughout the Hill Country and east to the Gulf Coast, he writes, “Almost everyone loves Texas mountain laurel when it is in bloom, and for many … it represents spring …. The huge clusters of deep purple to whitish flowers, which usually begin blooming in March, are outstanding. The pendant, wisterialike clusters can be ten inches long and may contain thirty-five individual flowers, each one smelling like grape Kool-Aid.”

Wauer also extols the beauty of huisache blooms: “New huisache leaves appear in Central Texas by mid-February; green-up is earlier to the south and somewhat later to the north and west.  And deep rich yellow flowers, spherical heads about two-thirds of an inch across on one- to one-and-a-half-inch stalks, are not far behind. Once those trees are in flower, they seem literally to light up the surroundings, providing both color and aroma to a landscape mostly dull from winter. And rather than putting on a few scattered flowers, which could easily be missed, the huisache usually bears hundreds of flowers at once. An incredible show! They may last for several days or several weeks, depending upon the local temperatures and winds.”

Gardening guru Howard Garrett (find details about his books, radio show, and newsletter at www.dirtdoctor.com) notes that while the beautiful blooms might bring us pleasure, their real purpose is to entice pollinators—bees, wasps, moths, butterflies and other insects. He points out that all trees produce flowers of some kind; some flowers are just showier than others.

Not only do flowering trees spruce up the spring landscape, says Garrett, but “the trees with the most extravagant blooms often have beautiful fall color, too.” One of his landscaping favorites, for that reason, is rusty blackhaw viburnum. “It has clusters of small, white flowers in the spring,” he notes. “The leaves are dark green and glossy in the summer and range from pink to red to dark purple in the fall. It’s beautiful from mid-spring to the first hard frost.”

He also favors desert willow and flowering dogwood. Garrett says that although this dogwood species’ natural habitat is East Texas, it can thrive in other areas, too. He adds, “It has spectacular spring flowers, and then red fruit develops over the summer that birds and other wildlife like to eat, followed by shiny, red seedpods that last over the winter.”

Garrett (aka The Dirt Doctor) also likes Texas madrones for the long-lasting punch they provide. “They have creamy-white blooms from February through April,” he says, “and a fleshy, edible fruit that forms from October to December. Even the bark is beautiful, ranging from white to orange to apricot and tan and even dark brick-red; it’s showiest in the winter.

“Kidneywood is also high on my list,” continues Garrett. “The blooms, which are most pronounced in late summer, range from pale yellow to white, and look light and lacy, similar to bottlebrush blooms. Not only are the flowers pretty, they’re very fragrant. Sometimes they begin blooming in May and continue through September.”

It doesn’t take long to figure out that there are few blooming trees that aren’t high on the Dirt Doctor’s list. (He also mentions redbud, Texas mountain laurel, scarlet buckeye, Texas buckeye, Mexican buckeye, wild olive, golden ball lead tree, and even the much-maligned mesquite.) His all-time favorite is the catalpa, though, for its smooth bark, sparse limbs, and the memories it conjures up of the catalpas he climbed at his childhood home in Pittsburg, Texas. It’s a case of history trumping horticulture.

No matter what your preferences when it comes to blooming trees, enjoy watching for those first thrilling blossoms of the season. As common as this age-old ritual is throughout the world, it still inspires hope with the promise of new beginnings, and isn’t that what spring is all about?