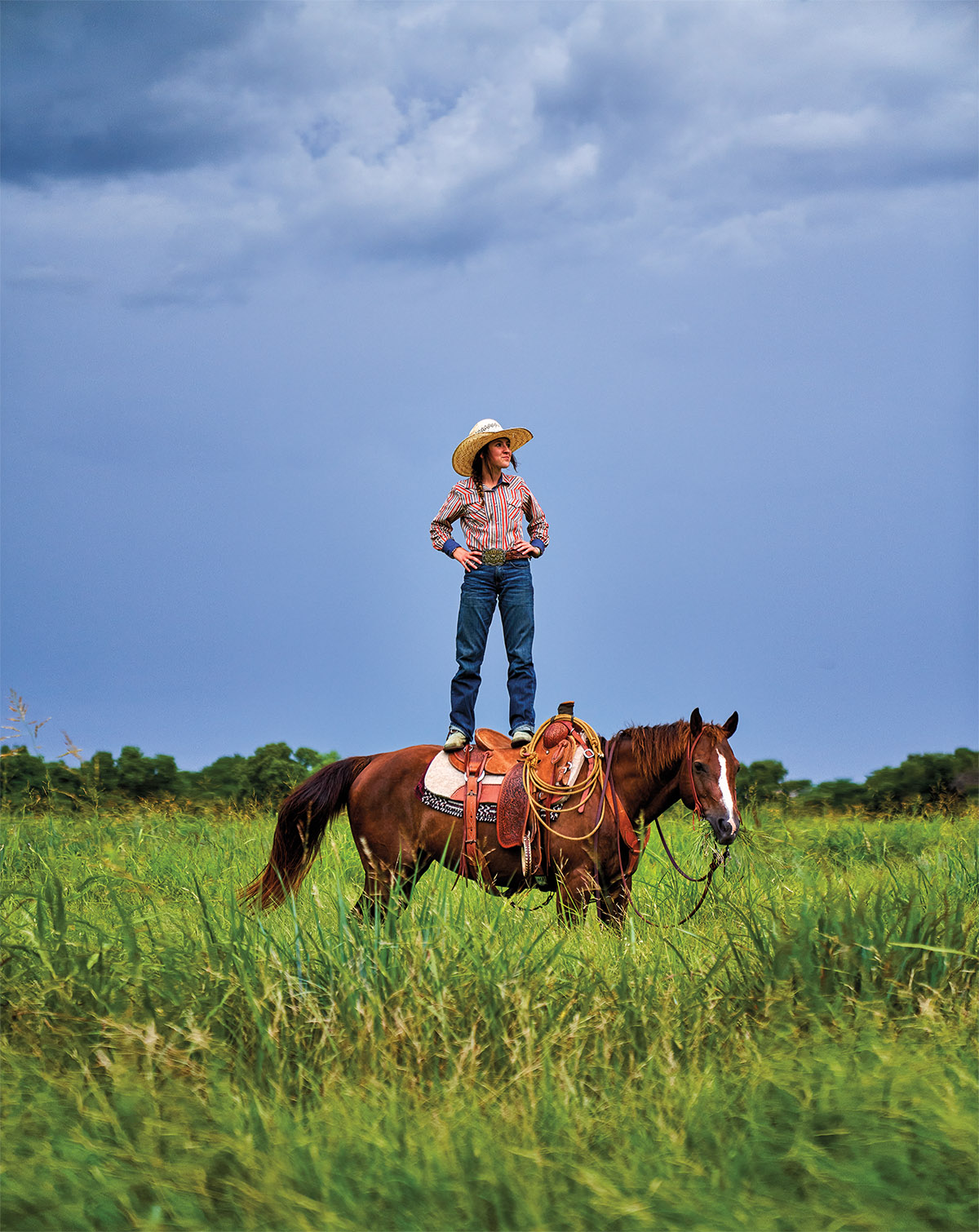 Once, when Maddie Ferguson was riding her horse at a rodeo in Bowie, she overheard a young girl exclaim to her mom, “Oh my gosh, she’s a real cowgirl!” The 18-year-old Nocona High School graduate, pictured on the cover and above with her horse, Boonie, doesn’t mind the moniker. “Rancher” and “horse trainer” also capture facets of her lifestyle, but if you ask her what she does, she’ll say “I run barrels.”

Ferguson’s day-to-day routine on her family’s 600-acre ranch in Spanish Fort isn’t all that different from that of her ancestors, who worked the same land the family purchased in 1872. Most days, she wakes up around 5 a.m. to feed her horses and complete chores around the ranch. Then she might go into town and help clean rooms at the Red River Station Inn, the Nocona hotel her parents own. After lunch, it’s back to the ranch to ride four or five of the family’s 10 horses, half of which are rescues she is rehabilitating. Some afternoons she gives riding lessons to kids: “I’ve never seen a sad kid on a horse,” she asserts. Ferguson hopes the lessons leave her students with a sense of accomplishment. “The No. 1 thing working with horses teaches me is patience and also contentment with myself.”

On a good night, Ferguson heads to the rodeo, either to compete in barrel racing—which involves galloping horseback for speed around three barrels in a cloverleaf pattern—or to socialize with friends. While some may fear an eventual disappearance of the cowboy lifestyle, Ferguson says there are “a ton of girls” in North Texas doing the same things as her. “All the cowgirls, we’re a family, and we support each other in many ways,” she says.

Ferguson starts college in Stephenville in the fall—Boonie will come with her—and plans to major in animal science with an equine science minor. Regardless of where life takes her, she already knows she’ll retire on her family’s land and defend it from being divided or sold off. “I will probably fight for this land forever,” she says.

That love of the land—working it, taming it, nurturing it—is the common thread that binds all the stories in this month’s Cowboy Special Issue. It’s in the tales of vaqueros whose hearts were said to give out the day they knew they were too old to work the land; the cowboy poets who immortalize their treasured landscapes in verse; and retired cowgirl Mama Sugar who laments the loss of a plot of earth she can cultivate with her hands. What they all recognize is one can’t understand Texas without understanding the land. And who knows the land better than the cowboys and cowgirls who have and will continue to roam it?