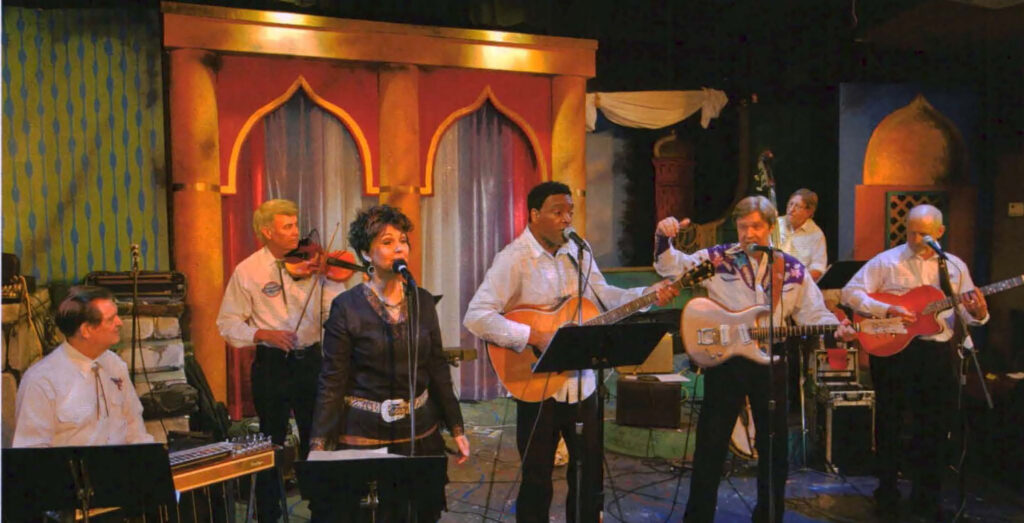 ”And at every show we play,” adds guitarist, pianist, and singer Art Greenhaw, “folks get teary-eyed when we break into the Doughboys theme.”

Baker and Greenhaw are relative newcomers to the legendary Western Swing ensemble. They’ve only been members for about 20 years. The band introduced its newest member, singer-guitarist Dion Pride, son of country star Charley Pride, at a Dallas performance in June.

”We brought down the house with ‘Beaumont Rag,’ a song the Doughboys re­corded in 1937,” says Pride.

Pride took the stage with The Light Crust Doughboys this past fall in a series of shows called ”Doughboys Pride: Two Great Names in American Music” at Dallas’ Pocket Sandwich Theatre. ‘Tm thrilled to be a Doughboy,” says Pride. ”It felt amazing when I first put on the burgundy band shirt with the flowers and The Light Crust Doughboys lettering. I grew up knowing about the band, and I have great respect for its history.”

Doughboys history begins in 1931 in Fort Worth, when a young fiddler from Turkey, Texas, named Bob Wills convinced Burrus Mill, producer of Light Crust Flour, to sponsor the Wills Fiddle Band on the radio. With Herman Arnspiger on guitar and Milton Brown on vocals, the newly named Light Crust Dough boys were on the air. At first, Burrus general manager W Lee O’Daniel didn’t care for the band’s “hillbilly” sounds. Then he beheld the Doughboys’ immense popularity with radio listeners—and flour buyers. Developing a homey, cornpone radio persona, ”Pap­py” O’Daniel became the group’s an­nouncer. And, by the end of the Great Depression (after forming his own com­pany, Hillbilly Flour, with its own band, the Hillbilly Boys), O’Daniel would ride the airwaves to the governor’s mansion and a seat in the U.S. Senate.

Wills, who was fired in 1933 for drink­ing and playing too many dances, went on to become the fabled ”King of Western Swing” with his band the Texas Playboys. Brown left the Doughboys to start his own group, Milton Brown and his Musical Brownies, which further established Fort Worth as the cradle of Western Swing.

At least 175 blue-chip Western-Swingers shuffled in and out of the Doughboys’ ranks as the years flew by. While the band cranked out the old-time fiddle tunes, its versatile repertoire also included cowboy songs, waltzes, hymns, popular ballads, and a range of Dixieland, blues, and jazz songs. After Benny Goodman launched the swing craze in 1935, the Doughboys played the hot new sounds created for horns on their string instruments.

In his 2002 book, The Light Crust Doughboys Are On The Air, historian John Mark Dempsey points out that the Doughboys were also heavily influ­enced by black musicians. A lively anec­dote from Doughboys banjoist Marvin “Smokey” Montgomery illustrates that cross-cultural experience. While mak­ing the film The Big Show at the 1936 Texas Centennial celebration in Dallas with Gene Autry, Montgomery met Leon­ard Slye, who later changed his name to Roy Rogers. To harness Slye’s wild streak, Republic Pictures bosses locked the young singer in his room at the Adol­phus Hotel. “But,” Dempsey recounts, ”while Montgomery waited outside his door, Slye would climb over the transom, and he and Marvin would then hit the funky clubs in Dallas’ Deep Ellum district.”

Montgomery-whose fingers “smoked” the banjo frets-joined the band in 1935 and, except for during World War II and another brief hiatus or two, he remained an active Light Crust Doughboy until his death in 2001. “We’ve retired the banjo po­sition in the band for now,” says Art Green­haw. ”Nobody could replace Smokey.”

Granbury rock-and-roller Phil Strawn, whose late father Johnny Strawn played fiddle with the Doughboys, understands Greenhaw’s feelings. ”I played with them once in a while as an unofficial Light Crust Doughboy, usually on five-string banjo or bass;’ he explains. ”My father and I worked up a banjo and fiddle duet on ‘Ole Joe Clark’ for their album ‘150 Years of Texas Country Music.’ I had known most of the Doughboys all my life, but when Smokey called the downbeat, I was so nervous my hands were shaking. It just hit me right upside the head when I was in the stu­dio recording for that album—I had been invited to be a part of Texas history.”