Founded by western swing legend Bob Wills in Fort Worth in 1931, The light Crust Doughboys were originally sponsored by Burrus Mill, the maker of Light Crust Flour. Often called the longest-running band in Texas, the Doughboys have survived not only the passage of time and generations but also changing tastes in musical styles and formats, from 78 rpm records to compact discs and digital downloads. Though the group’s best-known announcer, W. Lee “Pappy” O’Daniel, later became a Texas governor and U.S. senator, he once said that his greatest legacy would be The Light Crust Doughboys.

The current Doughboys. which include Maurice Anderson on steel guitar; Maurice’s wife. Teresa Anderson. on vocals; and Kevin Bailey on vocals and guitar, will play a Valentine’s show on February 5 and a springtime show on April 16 at Dallas’ Pocket Sandwich Theatre. Call 214-821-1860. 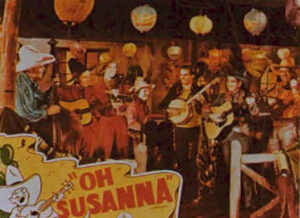