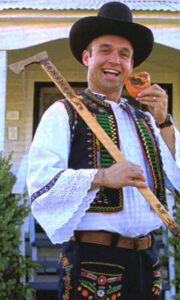 While some may only know La Grange for its infamous “chicken ranch” or through the music of bearded rockers ZZ Top, in truth this Texas town has much more to offer. I headed to La Grange to “Czech” it all out.

9:00 a.m. I made ar­rangements with Camp Lone Star to take a two-mile canoe trip down the Colorado River. There was just enough time to soak up the Texas sunshine, drag my toes in the frigid water, and observe the local swimming cows, who seemed much more eager to wade in than I was.

11:00 a.m. I stopped at the Texas Czech Heri­tage and Cultural Center. In the late 1800s, an astounding 80 percent of Fayette Coun­ty’s population was of Czech descent. The center tells the stories of these early settlers who ventured to Texas poor in money, but rich in culture. I walked through original Czech homes, listened to Czech music, and took time to fully appreci­ate the traditional Czech clothing (pictured above).

12:30 p.m. I headed to Weikel’s Bakery, with roots dating to 1929. To­day the bakery specializes in kolaches. These gooey, fruit-­filled Czech pastries make for excellent road-trip food and the perfect way to ruin any upcoming meal. It took amaz­ing willpower not to finish my classic prune and modern strawberry-cream-cheese kolaches, but I had to save room for my next stop.

1:00 p.m. I walked through the back en­trance of Prause Meat Market, past the smoldering pits, and was relieved to find that they still had barbecue left for lunch, as they’ve been known to sell out quickly. This historic join is run by fourth generation of Prauses who still operate a full-service meat market up front and offer smoked meats from the back. I enjoyed a full plate of brisket, sausage, and their signature pork roll.

2:15 p.m. Beyond its Czech past, La Grange also holds a rich German and Texan history. To explore both, I headed to Monument Hill and Kreische Brewery State Historic Site. My first stop was Monument Hill, where a tomb holds the remains of 52 Texas heroes killed during the days of the Texas Repub­lic in the Dawson Massacre and Mier Expedition. Soldiers captured by Mexico during the failed Mier Expedition were forced to draw beans. A white bean meant life and a black bean meant execution, making for one of the most dramatic stories in Texas history. A short hike from the tomb led me to the ruins of the Kreische Brewery, where German immigrant Heinrich Kreische founded one of the first commercial brew­eries in Texas.

4:00 p.m. While the brewery has gone dry, you can still sample the traditional beverages of the motherland at the Rohan Meadery, where owners John and Wendy Rohan are putting a Texas twist on this ancient libation. Mead is actually honey wine, and after a lesson on the art of honey tasting, I grabbed a glass of refreshing pomegranate mead and sipped it on the patio.

6:00 p.m. As the sunset, I followed the aroma of deep-fried deliciousness to Gold ‘N Crisp Fried Chicken. Since 1972, this small stand has been turning out piping-­hot boxes holding some of the tastiest fried chicken in Texas. I grabbed an open picnic table, extra napkins, and proceeded to devour every piece.

7:30 p.m. To cap off the day, I stepped inside The Bugle Boy, an intimate listening room housed in a renovated World War II Army barracks. This place is so seri­ous about music that they allow no talking and pour your potato chips into a bowl to limit bag noise during shows.

As the acoustic sounds of a Texas troubadour filled the space, my head, heart, and stomach were filled with joy from what can only be de­scribed as one of “The Best Little Day Trips in Texas.” So, whether you follow my foot­steps or forge your own path, I hope to see you on the road.