Written by Art Williams, Photographs by Will van Overbeek | From the February 2017 issue | Updated: October 26, 2018 | Filed Under: Camping + LodgingHistoryTRAVELWhere to Stay 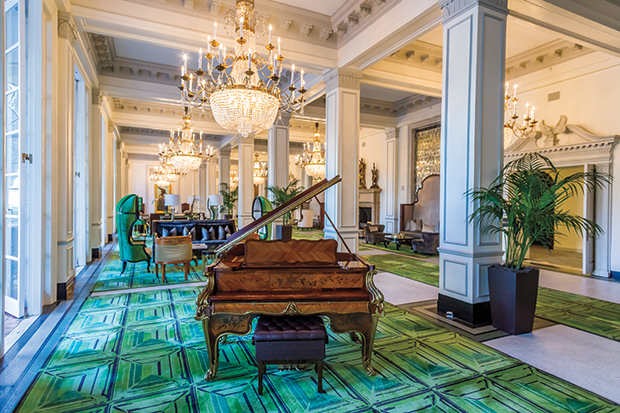 The lobby of St. Anthony Hotel.

Sparkling chandeliers illuminate a couple seated in a pair of vivid green, high-backed chairs. Light streaming through a row of French doors throws shadows on the patterned carpet and highlights the gleaming inlaid rosewood of a grand piano. A marble stairwell winds gracefully to the second floor, and the ambiance suggests a bygone era of San Antonio’s rich history.

By all appearances, it could easily be 1935, when St. Anthony Hotel owner Ralph Waldo Morrison filled the lobby with French Empire furniture, sculptures, paintings, tapestries, and a 1927 Steinway piano built for the Russian Embassy. Yet my visit takes place in 2016, a year after the hotel’s latest restoration.

I love historic hotels—their architecture, atmosphere, and stories. Staying in one gives me a glimpse into the history of the city I’m visiting. I also love San Antonio, a city rich in reasons to visit, both old and new.

Three grand San Antonio hotels, the St. Anthony, Gunter, and Crockett, opened in 1909. The timing is hardly a coincidence. Founded at the crossroads of early travel routes, San Antonio saw significant growth after Texas became part of the Union and again with the arrival of the railroad in 1877. According to the Texas Almanac, San Antonio was the state’s most populous city in 1909. And, says architect Irby Hightower, principal of Alamo Architects Inc., these hotels filled a growing need for lodging and places to conduct business. Even during tough economic times in the 1920s and 1930s, San Antonio prospered thanks to oil and ranching money. Through the years, these hotels made enough money to remain open but not so much to tempt their owners to tear them down and build something bigger. All three have continuously operated as hotels, and thanks to recent renovations, they retain their original grandeur.

The St. Anthony opened first, built by cattlemen B. L. Naylor and A. H. Jones three blocks from the Alamo. They incorporated luxurious touches, such as tile and marble, steamed and chilled water, and telephones in the guest rooms. Hotelier Ralph Morrison, who loved both art and antiques, bought the hotel in 1930. A reconfiguration in 1959 added a color scheme by New York designer Dorothy Draper (whose favorite color, a vivid green, was reintroduced with the 2015 restoration) and the St. Anthony Club, the first place San Antonians could buy cocktails. Many a business deal transpired within its wood-paneled walls, including the beginnings of Southwest Airlines, sketched out on a cocktail napkin by businessman Herb Kelleher.

The property’s latest restoration uncovered original Venetian-tile mosaics, restored sculptures and tapestries, and brought back the Steinway. When I visit San Antonio, even if I’m not staying at the hotel, I enjoy a stroll in the elegant lobby as well as dining at the hotel’s restaurant, Rebelle, which blends stylish lighting and sparkling tile with Mission-style archways and balconies, and presents a menu full of sophisticated steak, fish, and vegetable dishes.

A few blocks away, the Gunter Hotel bears the name of Jot Gunter, a ranch-er and real estate investor who helped finance the building in the early days of the 20th Century. In 1924, the hotel was sold to hotelier T.B. Baker, who expanded and remodeled the hotel in 1926. The Gunter grew popular as a resting place for cattlemen, politicians, entertainers, and military personnel. People flocked to open-air dances on its roof throughout the Depression and World War II, and Delta blues guitarist Robert Johnson held his first recording session here in 1936.

Now known as the Sheraton Gunter and recently renovated, this hotel sports a mix of historic and modern elements. The lobby, for example, showcases original, inlaid wooden floors and decorative ceilings, contrasted with modern touches, such as illuminated, fabric-draped columns.
A series of displays in the basement includes historic postcards, photos of San Antonio’s annual Battle of the Flowers, original room keys, hotel ledgers, and photos of staff members and famous guests, including Sam Rayburn and Mae West.

The Gunter’s casual lobby restaurant, Market On Houston, serves breakfast, lunch, and dinner, with more than 18 craft beers and 20 wines by the glass at a bar in the corner, plus house-made pastries, breads and desserts, and coffee drinks.

The third “grande dame” hotel to open in 1909, the Crockett, was built as a lodge and hotel by the Three Link Fraternity, a fraternal organization that dates to 18th-Century England.
A seven-story west wing was added in 1927. In 1982, San Antonio native John Blocker bought the hotel and renovated it based on vintage photographs that showed original architectural details. Another renovation in 2007 updated the guest rooms and suites. The Crockett offers a free buffet breakfast, and the hotel’s bar, Ernie’s, features Texas craft beers and spirits.

Continuously operating for more than a century, the Crockett stands on part of the original Alamo grounds and bears the name of one of its most famous defenders, David Crockett.
If you’re lucky enough to reserve a room overlooking the Alamo complex, the view may whisk you away to San Antonio’s early days.