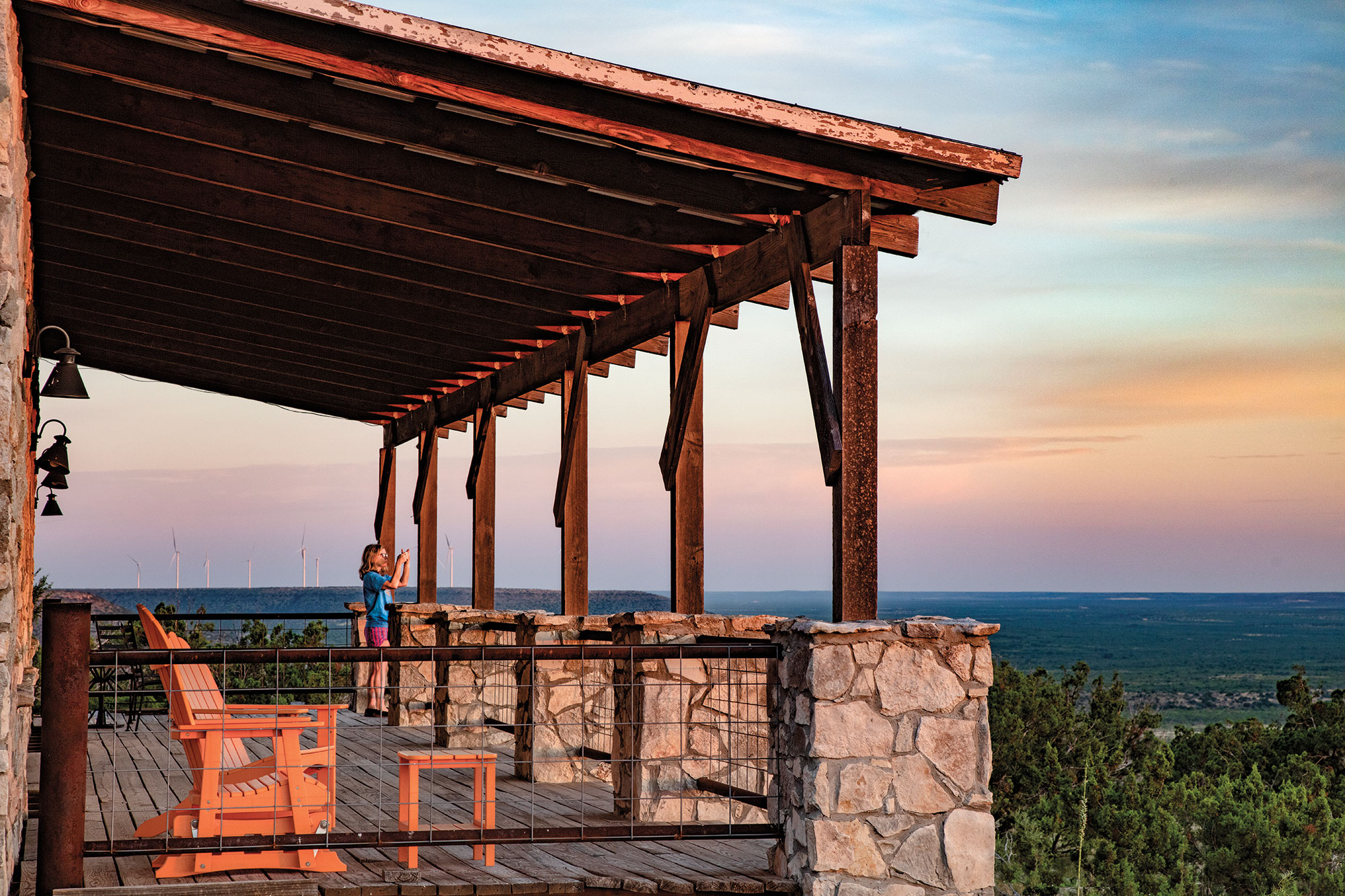 Often the most exceptional things are found by accident.

That’s what happened at Twistflower Ranch, 5,800 acres of West Texas mesas and canyons, named for the rare bracted twistflower that bathes the arid landscape with delicate purple blossoms in the spring.

Around 2004, owners Mike McCloskey’s sons, Ted and Kevin, were exploring when they discovered a cave with a spring bubbling out of it. Mike McCloskey invited an archeology buff to check it out. As they hiked down, they stopped for a breather in the shade of a rock shelter—not quite a cave—set back into the bluff. While talking, the archeologist stopped mid-sentence, pointed to the limestone façade, and shouted, “Rock art!” And that’s how the McCloskeys discovered the 2,000-year-old pictographs tucked away on their land.

It’s also partly why I am here at Twistflower, about 45 miles north of Ozona, with my 9-year-old son, Harry, and two of my friends, one of whom has also brought her son, Prine, age 13. We have signed up for one of Twistflower’s regular Archeology Weekends hosted by McCloskey and Mike Quigg, an archeologist from the Gault School of Archaeological Research. Quigg’s knowledge is vast,
so all of our rookie questions—and there are many—get answered: “Quigg, is this an arrowhead?”

McCloskey, a retired environmental engineer from Austin, bought this land with his wife, Donna, in 2000 from a family that ranched sheep and cattle here for 100 years. They had no idea prehistoric people had left rock paintings as record of their life and times here. It took the McCloskey boys to find it. 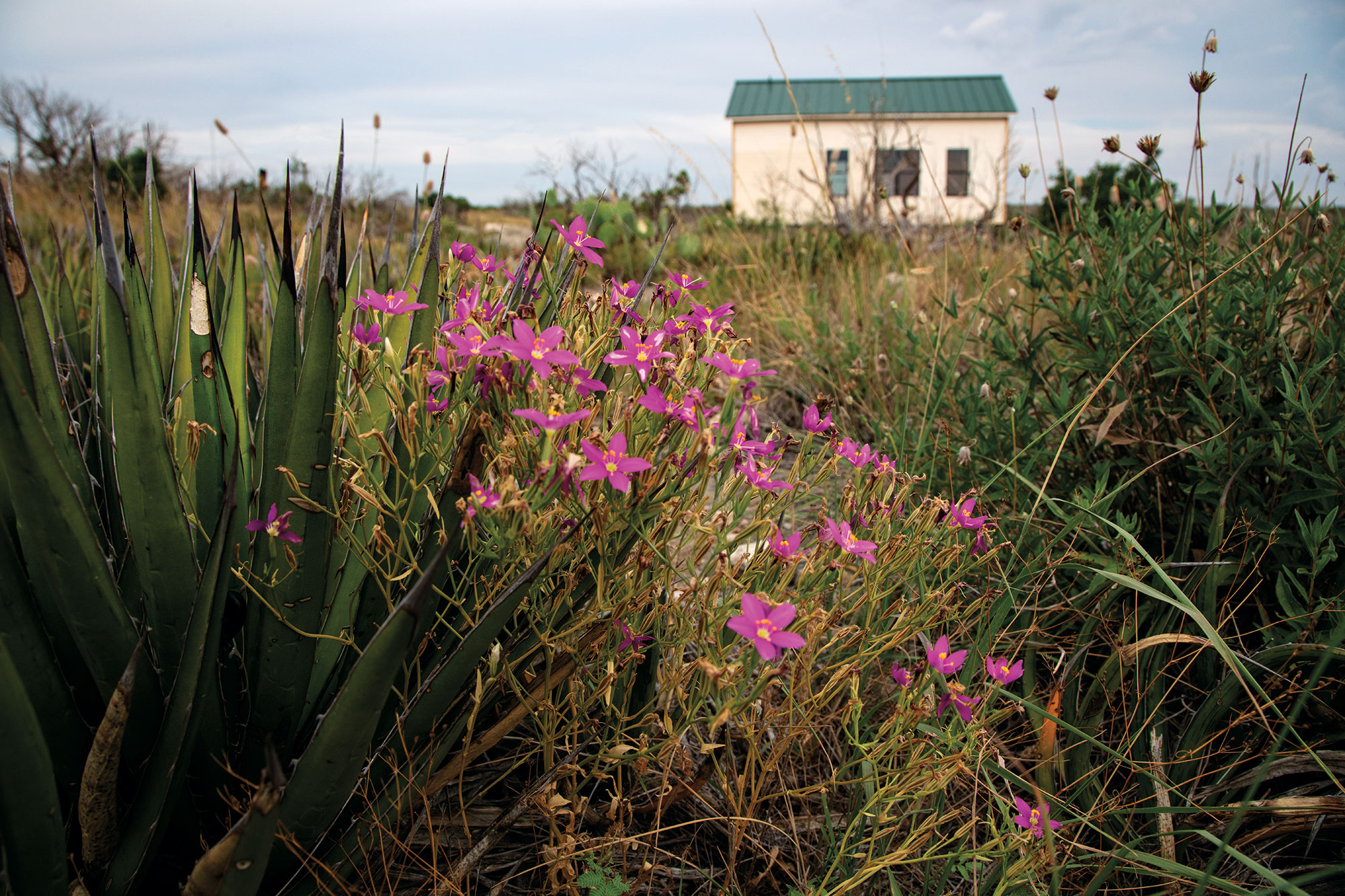 And now McCloskey, Quigg, and the five of us in my group are off to see these 2,000-year-old drawings, dodging cactus spines and lechuguilla points as we crawl down the caprock to that same limestone shelter. Harry and Prine race ahead—their urge to climb, discover, and leave their parents behind must be as ancient as the rock art we are here to see. I wonder if prehistoric mothers also shouted at their children to slow down and watch for rattlesnakes.

We arrive to the shelter, but I see no rock art. Quigg takes out the yoga mat from his backpack and lays it on the shelter’s bumpy floor. Then Harry lies on his back next to Quigg, their noses just inches below the slanting rock of the shelter’s ceiling, and Quigg begins to point out red and black painted figures. One resembles a feather, another looks like a snake around a stick. Harry’s face transforms from mild interest to wonder. The little rocky grotto is filled with “ohs!” and “ahs!” as our eyes adjust and the ancient art emerges into view.

When it’s my turn on the mat, I lie back and look up. Right above my nose, spirals and feathers emerge from the rock. I am lying in the same spot as the human who drew these shapes two millennia ago. Weirdly, I feel tears dripping down my temples into my ears. In a flash of new awareness, I zoom out from the micro to the macro. I sense how I am not just me—a 21st-century mom and writer, a mere blip in time; I’m also part of this much bigger and quite miraculous story of being a human. 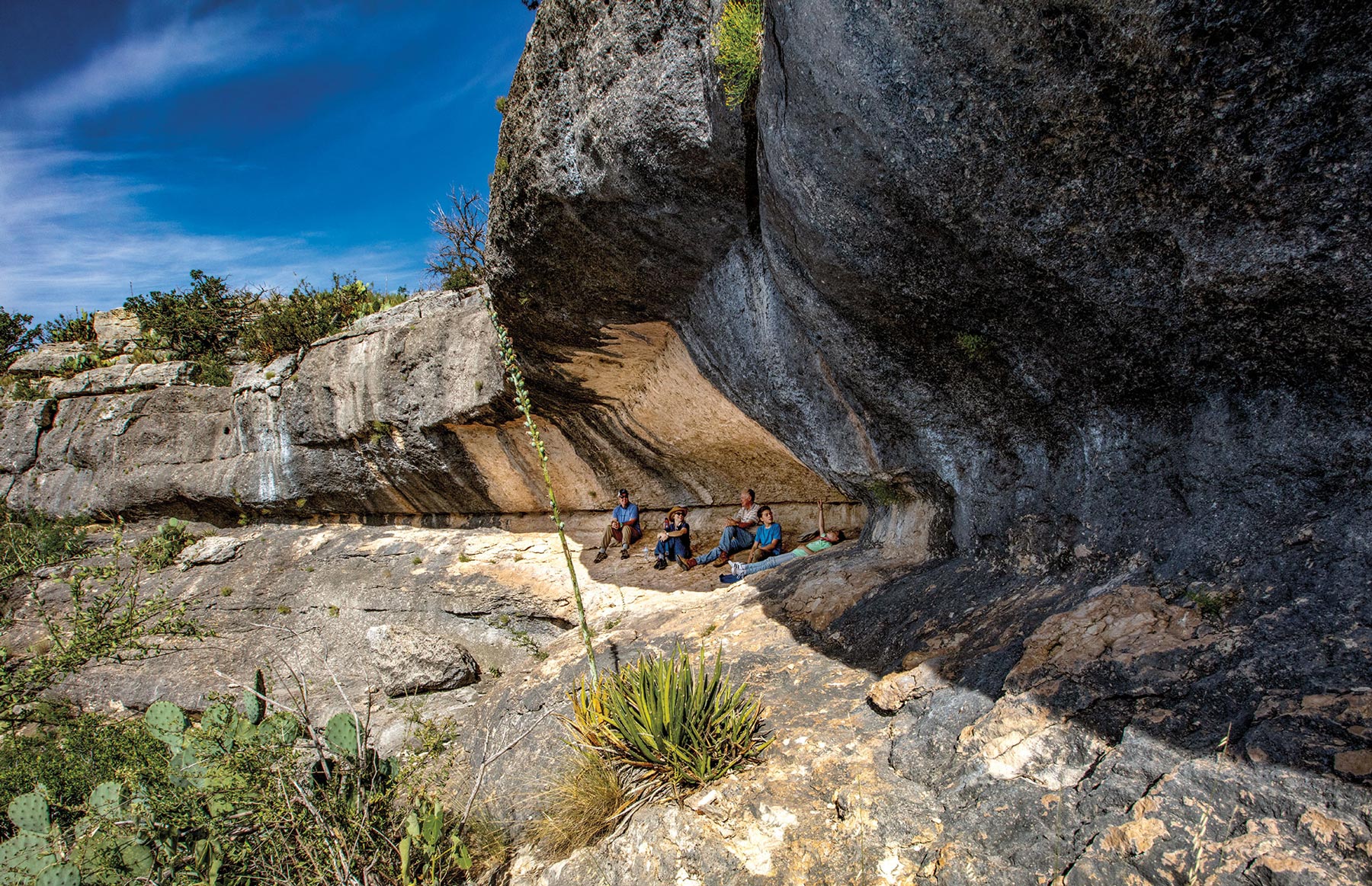 That afternoon, Quigg takes us hiking along a creek valley, where yellow aster and vervain flowers mingle with yucca and choya. He shows us the earth ovens and discarded burned rock that prehistoric people used for cooking. He grabs a burned rock, scratches it, and holds it up to our noses. Somehow, all these centuries later, it still smells like someone struck a match. He shows us the bedrock mortars—holes in large limestone rocks that natives once used to grind down plants and minerals. He notes dried bulbs of the sotol plant, a source of food and fiber. “These people understood their environment and what could and could not be done with it.”

Quigg also shows Prine and Harry how to throw a dart with an atlatl—a kind of arm extender the natives made out of sticks—and how to shape chert into arrowheads. Later, Harry sits cross-legged on the ground for hours trying to carve rocks into pointy tips. He hasn’t been on his iPad once this weekend.

The open skies and intensely starry nights at Twistflower make it an appropriate place to ponder big questions.

Before dinner, some of us jump in the reviving water of Twistflower’s pool while McCloskey is back at the house cooking up pork and roasted vegetables so good that even the veggie-resistant boys like them. The primary ranch compound—a main house, a yoga room, and four spacious cabins accented with native stone and wood—is perched atop a plateau with never-ending views. The pool overlooks a canyon where turkey buzzards, eye level to us, glide on thermals. Harry, who hasn’t learned yet that buzzards are considered ugly, watches. “Mom, they’re beautiful,” he whispers to me.

The open skies and intensely starry nights at Twistflower make it a natural place to ponder big questions. I ask Quigg about the meaning of the serpentine motif in the rock shelter. “We will never know for sure,” Quigg says, “but the important thing is to record and ask these questions now. Like the White Shaman [a well-known rock painting on the Lower Pecos], these are fading. We can’t preserve them; they are a vanishing resource. But we can document.” 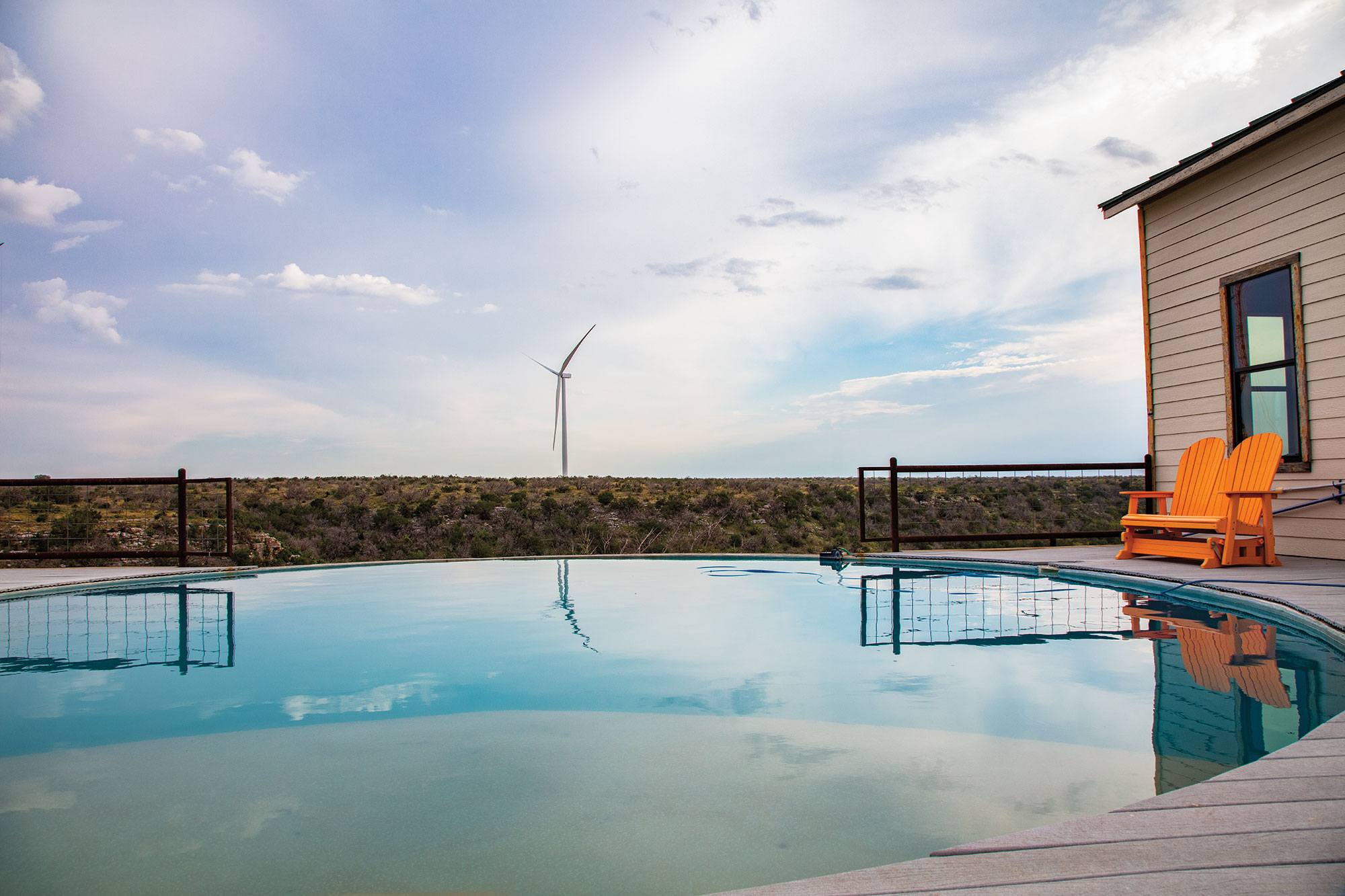 Shorn of its natural grasses after a century of overgrazing, Twistflower’s terrain is partly dominated by caliche and scrub brush. But the McCloskeys have labored to rehabilitate the land, killing off some of the tar bush to make way for native grasses. In a section of 700 rehabilitated acres, fields of grasses blow in the breeze, and the springtime wildflower colors are breathtaking: purple verbena, pink and gold Indian blankets, yellow daisies.

Found only in Texas—and rarely at that—the bracted twistflower sprouts delicate leaves that had already blown away in a spring storm by the time we visited. But it seems fitting they should thrive here, where you can feel the care given to this land. McCloskey and his son, Ted—who moved out to Twistflower when he was 23 to be its caretaker—built this retreat from unforgiving ground. Ted and a co-worker lugged truckloads of limestone rocks up to build the exterior walls of the A-frame big house and cabins located at the highest point on the property. They hauled lumber from Austin to line the walls and soaring ceilings. A proficient welder, Ted fabricated all the metalwork on the property, creating the rails around the wide porches.

It seems fitting the bracted twistflower—a rare species found only in Texas—should thrive here, where you can feel the care given to this land.

The Irish poet John O’Donahue wrote, “May you know that absence is alive with hidden presence, that nothing is ever lost or forgotten.” After 15 years of running Twistflower, Ted was killed in late 2017 when trying to stop a gunman who opened fire at a Halloween party in Austin. He was 37. I never met him, but even as a visitor I sense how part of him is present in every aspect of this ranch: in the ancient rock art he helped find, in the sweeping sunsets he once watched from porches he built, and in the new wildflowers that were finally able to bloom again this spring.

In the face of the tragedy, McCloskey still says he appreciates their shared labor of love at Twistflower and how their relationship evolved from one of father and son to that of partners and collaborators.

“That’s something a lot of parents don’t get,” McCloskey says. “The other thing about Ted, for pretty much every day he was out here, he was doing what he wanted to do—being outside, using his hands, solving problems.”

Later, Harry and Prine want to look for more caves and rock art. I think about the McCloskey boys and their exploratory rambles on this ancient terrain. After just one weekend here, Harry and Prine are fueled up with their fresh knowledge of the land and how to navigate it. I like their newfound confidence. Sometimes the best thing we give our kids is a chance to lead the way.