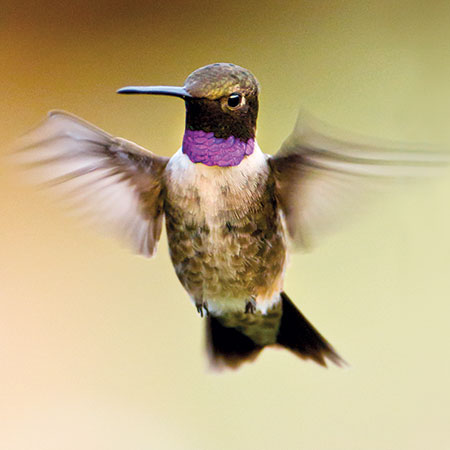 Resting in the shade next to a pool of clear water, I could almost forget that miles and miles of West Texas desert surround me. But in fact I was in the middle of the Chihuahuan Desert, one of the most biologically diverse arid regions in the world.

Attracted by feeders and flowers in the pollinator garden, black-chinned hummingbirds are common at the center from May through September.

This 220,000-square-mile desert starts south of Mexico City, reaches into southern New Mexico, nicks a corner of Arizona, and covers a broad triangle of westernmost Texas. More than 3,000 species of plants call it home, along with more kinds of birds, mammals, reptiles, and butterflies than any other ecoregion in the United States. Who knew a desert held so much life?

Eager to explore a bit of this landscape, I called my hiking buddy Kathy Weiler and we made the long drive from Austin to the Chihuahuan Desert Nature Cen-ter, just outside Fort Davis. In addition to exhibits on geology and mining, a cactus greenhouse, and outdoor botanical gardens, the facility has more than three miles of trails, including the Modesta Canyon Trail, home of the aforementioned spring. Relatively short at less than two miles, this trail includes a steep hike into and out of the canyon, so allow a couple of hours for the experience.

We left from the Visitors’ Center, crossing level ground where grasses and wildflowers wave in the breeze and scattered juniper, oak, and agarita provide puddles of shade. No evidence betrayed the existence of the canyon mere yards in front of us; it appeared almost magically, a yawning crack in the ground. We started our descent on stone steps built into the canyon wall.

This part of the walk provides a living lesson in geology, as the canyon was formed at the contact point between two different kinds of rock. To our left, a formation known as the Sleeping Lion was named for a distinctive leonine mountain near Fort Davis National Historic Site, roughly five miles away. The Sleeping Lion was created millions of years ago by molten rock, or magma, that forced its way through rock layers above it then spread out over the ground to cool and solidify. The wall on our right, known as the Weston Intrusion, is younger, and was formed when magma squeezing up from deep within the Earth crystallized back into solid rock without reaching what was then the surface.

Over the years, erosion concentrated at the meeting point of these two for-mations, creating the 200-foot-deep canyon. The two sides bear little resemblance to each other. The Weston looks like a tilted, crumbling layer cake, with row after row of cracks and loose chunks poised to crash to the ground, while the Sleeping Lion appears more solid, with only the occasional crack or protruding boulder.

As we continued down into the canyon, the landscape gave way to pinyon pine, Mexican buckeye, madrone, and mountain laurels. Ferns cascaded from cracks in the rocks like a botanical Rapunzel, nourished by permanent water seeps. These plants grow here thanks to cooler, wetter conditions in the canyon, an area known as a microhabitat. Here and nearby in the upper Davis Mountains, a microhabitat known as a sky island harbors plants and animals not found in the surrounding desert.

The spring forms a pool of water, about the size of a king-size bed, on a level spot down in the canyon. We sat on flat rocks at its edge and enjoyed the cool shade and water. A dragonfly hovered over the water’s quiet surface, and beneath it we could see wriggling tadpoles. These are likely the young of Rio Grande leopard frogs, which live here year round, although canyon tree frogs, red-spotted toads, and tiger salamanders also lay their eggs in this water. Late at night, after the center closes, mule deer, fox, and mountain lion have been known to show up for a drink.

Refreshed, we returned to the trail, which climbs up the other side of the canyon and out onto the top of the Weston Intrusion. The view from this high point is spectacular—row after row of mountains in shades of gray, buff, and green, the sky above streaked with wispy white clouds. The trail circles around Lion’s Head Hill, a mound of upended rocks the size of trucks. Huge boulders scatter down the hillside, testament that erosion is still alive and well. This would make a great place for a game of hide-and-seek.

After rounding the hill, we crossed a wide swath of knee-high grass and reached an intersection marked with the number 17. To our left, a trail follows a bluff and ascends to 180-foot-high Clayton’s Overlook, and from there wends back to the Visitors’ Center. We continued on the Modesta Canyon Trail, though, which veers slightly to the right and follows the edge of the canyon. After maneuvering a field of rocks sitting at various angles, we reached the beginning of the canyon, here little more than a dip in the ground.

Back at the Visitors’ Center, we stopped at the water fountain on the covered back porch, then slipped into the botanical garden, making a beeline for the Pollinator Garden, where plants such as coneflowers, lantana, Turk’s cap, and sage attract hummingbirds, butterflies, bees, and wasps. From a bench in the shade, we watched these hard-working pollinators go about the business of making sure flowers bloom again next season. On the breeze, we could pick up the scents those flowers produce to attract their helpers, and we could hear the hum and buzz of tiny wings. The desert is very much alive.